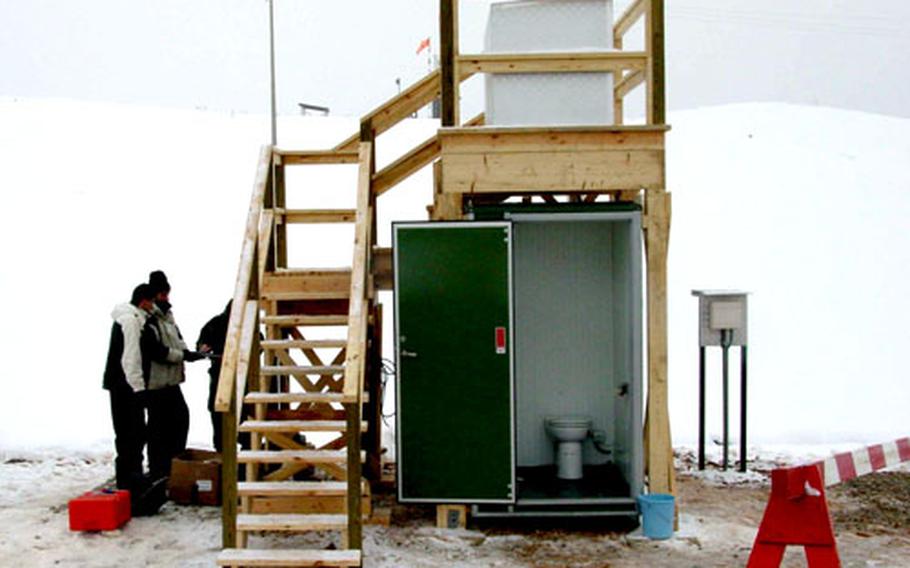 The WC-16 toilet features a stainless steel commode, a vacuum-assisted flush, an automatic emptying cycle and an incinerator that turns human waste into fine ash and needs cleaning out only twice a year. (Courtesy of John Johnson)

John Johnson used to spend his days with his head in the clouds, or at least his mind on the stars. His work concentrated on 3C273, a starlike object, the brightest one in the skies, whose diameter Johnson mapped via its patterns of light and dark.

Then he came to work for the U.S. Army in Heidelberg, Germany. Johnson, a physicist, gained a nickname, &#8220;Doc.&#8221; And his work changed, from the abstract and celestial to the concrete and decidedly more earthy.

But it&#8217;s not just any toilet. The WC-16 features a stainless steel commode, a vacuum-assisted flush, an automatic emptying cycle and an incinerator that turns human waste into fine ash, which needs cleaning out only twice a year. The prototype, which cost $4,500, had its debut in January at Kosovo&#8217;s Camp Bondsteel.

It worked for three weeks. But when the temperature fell below freezing, the system froze, the burner overheated and the processing chamber cracked.

For the past six years Johnson has worked as one of 18 Army science advisers, scientists who go out into the field to see what technologies troops need and get it to them fast. With his budget of about $80,000 a year, he&#8217;s helped get V Corps command tents, replacing less deployable command trailers; worked on solar generators for USAREUR; loaned his expertise in surveillance equipment at Campbell Barracks and installed a big, flat computer monitor in a Humvee to help ease the eyestrain of GIs in the field.

Sometimes, field commanders come to him with a specific request to find something or make something work better. Sometimes, he finds something and goes to them to see if they want to try it out.

It&#8217;s a far cry from what he used to do, researching abstract concepts for years with little to show for it but written reports.

But that&#8217;s not the only reason Johnson has loved his tenure as science adviser.

He&#8217;s deployed many times to the field, to the Balkans and Iraq and said he&#8217;s come to value the company of soldiers and finds it rewarding to try to improve their lives.

Johnson, tall, pale, balding and 64, looked even more like an academic until he came to Heidelberg and was informed that his beard would be no problem under his gas mask as long as he smeared it with Vaseline.

In September, he&#8217;ll return with his family to the Army&#8217;s Aviation and Missile Research, Development and Engineering Center at Redstone Arsenal, Ala.

His years as science adviser had made a big impact on him.

Despite the problems with the WC-16, the high-tech portable toilet being developed by U.S. Army Europe science adviser John Johnson, a colleague says Johnson&#8217;s work in Europe will be lasting.

The WC-16 didn&#8217;t immediately work. But other projects &#8212; Johnson does about six a year &#8212; have been more successful. The waste oil blender, requested from the 18th Engineer Brigade, was supposed to drain dirty oil from military vehicles, clean and filter it, then blend it with JP-8 fuel from the tank and return it to the tank. That would mean oil changes could be done anywhere, with the device plugging into the vehicle. Johnson bought two of them and put them to the test.

One of Johnson&#8217;s most promising projects uses photovoltaic generators and solar panels that could someday significantly cut fuel costs &#8212; up to $30 a gallon on deployment.

And the WC-16 may yet have its place in the sun. The toilet is undergoing repairs and upgrades and will roll out again at the end of the summer, this time to Grafenw&#246;hr, Germany.