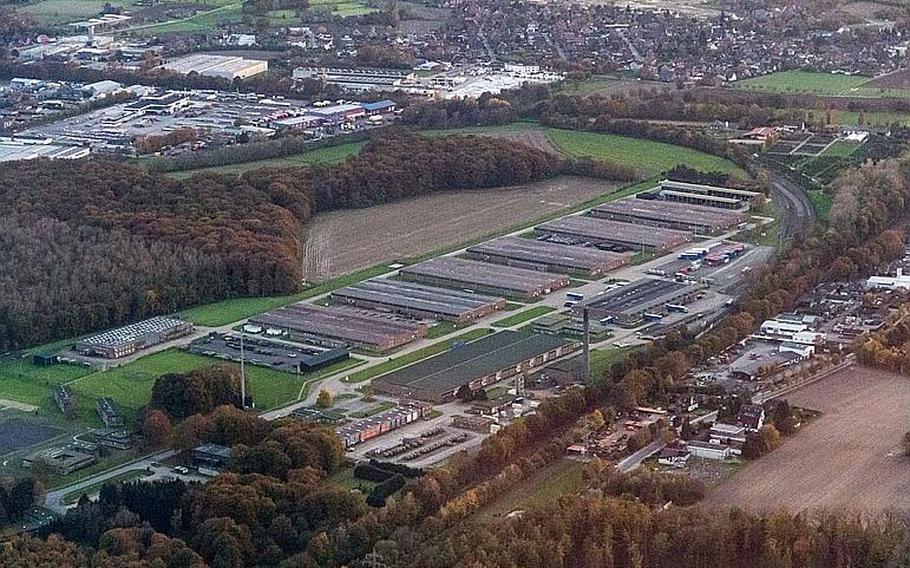 In June 2017 a group of workers at a U.S. Army warehouse on Tower Barracks in Dulmen, Germany, were exposed to a toxic agent after mishandling a shipment of material that contained cadmium, according to the Army. (U.S. Army)

STUTTGART, Germany — A group of workers at a U.S. Army warehouse in Dulmen, Germany, was exposed to a toxic agent more than a year ago after mishandling a shipment of material that contained cadmium, the Army said.

The incident occurred in June 2017 at Tower Barracks, which is a site used by the Army for pre-positioning equipment.

The items were “incorrectly cleaned in a single section of a single warehouse by eight employees,” Col. Sean Kuester, commander for U.S. Army Garrison Benelux, told reporters earlier this week, according to a transcript obtained Friday.

David Wright Patterson, a worker who said he was exposed to cadmium at the barracks, told Scotland’s Daily Record newspaper on Monday that workers were offered no protection while he oversaw the cleaning of 50 boxes of contaminated Army equipment for 10 days.

The incident, which the Army said it didn’t discover until March, has led some local residents to express fears about wider contamination.

Cadmium, which is used in batteries, can be dangerous when not handled properly. It is a cancer-causing agent and can cause damage to kidneys and lungs depending on dosage and frequency of contact, according to the Centers for Disease Control and Prevention website.

Kuester said the Army should have been more transparent about what happened.

“We know we won’t earn your trust if we don’t perform better, so we will,” Kuester said at a news conference Tuesday.

The Army said the workers who were exposed to cadmium have been tested and are not registering elevated levels of the toxin.

“All eight have been medically tested,” Kuester said. “Of the eight, seven were tested through contractor-provided medical services and have normal cadmium levels. The eighth individual conducted testing independently and I do not have information on that person’s status as he is no longer an employee here.”

That worker is Patterson, who has taken issue with the Army’s account. The Scottish national said he was fired from his job at the barracks for blowing the whistle on the incident.

“I’ve been under a great deal of stress as a whistleblower,” Patterson told the Daily Record. “There are another 15 blokes who can’t say anything because they will end up getting the sack like me.”

“The contractor has redoubled efforts on safety training and proper methods for receiving, processing, handling and cleaning items that are possibly contaminated with cadmium,” Kuester said.