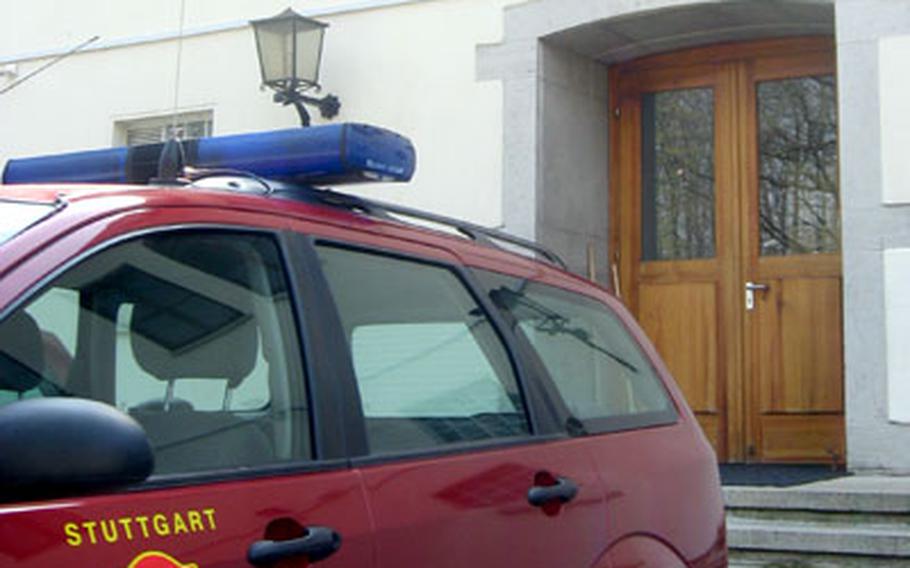 The Army Garrison Stuttgart fire station next to Panzer Casern in Boeblingen, Germany, is scheduled to be closed this spring and converted into a community center for garrison social events. (Charlie Coon / S&S)

BOEBLINGEN, Germany &#8212; Army Garrison Stuttgart is closing a small fire station located next to its community epicenter, Panzer Casern, and has told skeptical firefighters to not talk to the press about it or possibly be fired.

The Panzer fire station, which also serves nearby Patch Barracks, home to the U.S. European Command, has two fire trucks and a crew of firefighters. They are to rejoin the main firefighting unit seven miles away at the Stuttgart Army Airfield, from where they came in 2003.

The move is to happen in the next two months. Primary fire protection for Panzer and Patch would then be provided, respectively, by the German fire departments in nearby Boeblingen, which has nine full-time firefighters, and Vaihingen, an all-volunteer force.

According to an e-mailed response from the garrison&#8217;s public affairs office, the spacious building that currently houses the Panzer fire station would be used by the garrison command &#8220;for community events and activities.&#8221;

The garrison declined to state why a firefighting unit was moved four years ago from the airfield to Panzer, calling it an &#8220;internal decision.&#8221;

The Army requires airfields be properly staffed and equipped based on the average amount of aircraft movements per day.

A risk assessment performed in October 2001, shortly after the Sept. 11, 2001, attacks, concluded that &#8220;current fire protection within the (Army Garrison Stuttgart) does not meet DOD/DOA standards.&#8221;

The Boeblingen fire department, which serves its city of 46,000, found out three weeks ago that it would become the first responder for fires at nearby Panzer Casern.

&#8220;They did not come and ask; they only told us,&#8221; said Juergen Ernst, second chief of the Boeblingen department.

&#8220;For us this will be a lot of work. Every building there has a smoke alarm. We will be there three or four times per week (for false alarms), so this will be a problem for us.&#8221;

Ernst said the garrison must pay his fire station 2,400 euro for every false alarm to which it responds.

The Vaihingen fire department, which would serve Patch, was empty and locked shut Thursday afternoon when a reporter went there for comment.

The garrison fire department&#8217;s gag order was issued by fire chief Karl Doersam, who also declined to speak to the press. It stated that employees could be disciplined or fired for doing so.

Still, five fire department employees declined to speak on the record with Stars and Stripes when approached in person, by phone and e-mail.

Wiedmann said he did not feel the gag order was a big deal, nor was the decision to close the station. He noted that some firefighters whined back in 2003 when they had to move from the airfield to Panzer.