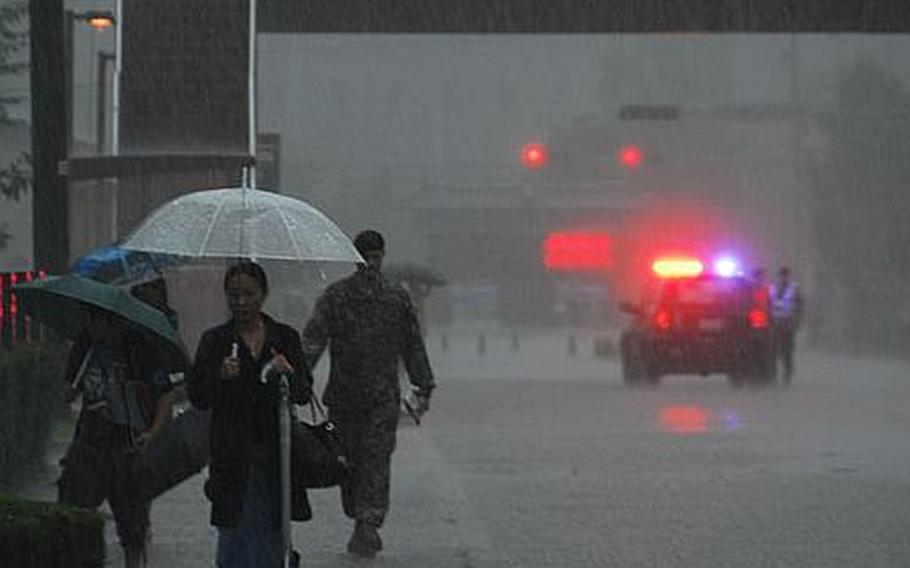 Buy Photo
A police car blocks traffic on 8th Army Drive on Tuesday afternoon as children leave school. Portions of the road, as well as other low-lying areas at U.S. Army Garrison-Yongsan, were closed Tuesday due to flash flooding. (Ashley Rowland/Stars and Stripes)

Buy Photo
A police car blocks traffic on 8th Army Drive on Tuesday afternoon as children leave school. Portions of the road, as well as other low-lying areas at U.S. Army Garrison-Yongsan, were closed Tuesday due to flash flooding. (Ashley Rowland/Stars and Stripes) Buy Photo
Staff Sgt. Erik Hydorn of the 142nd Military Police Company kicks away debris from a storm grate on 8th Army Drive at U.S. Army Garrison-Yongsan, portions of which were closed due to flash flooding on Tuesday. (Ashley Rowland/Stars and Stripes) Garrison spokesman Dan Thompson said the heavy rains and flooding caused &ldquo;moderate&rdquo; damage, including some to cars and buildings. No injuries were reported.

Officials were still assessing the damage as of Tuesday evening, though the rains had stopped and much of the flooding at Yongsan had subsided. Power had been restored to most areas of Main Post except the Moyer Recreation Center as of 7 p.m., Thompson said.

During the worst of the storm Tuesday afternoon, portions of 8th Army Drive were closed, gates were closed to inbound traffic and power was out on portions of the base, he said. There were reports of displaced topsoil and bulging asphalt in a few locations, he said.

The Korea Meteorological Administration reported that Seoul had received 252 millimeters, or nearly 10 inches, of rainfall, far more than any other location in South Korea.

Thompson said the flooding was &ldquo;quite unexpected,&rdquo; as only one to two inches of rain was predicted for the Seoul area.

But two historic storms this year &mdash; a snowstorm in January that dumped 11 inches of snow on Seoul and Typhoon Kompasu on Sept. 2 &mdash; had prepared the garrison to cope with inclement weather, Thompson said.

&ldquo;Since we just had the typhoon, we were ready to respond to it,&rdquo; he said. &ldquo;We were very well-trained for this storm.&rdquo;rowlanda@pstripes.osd.mil