Army’s training command in Europe to get new boss 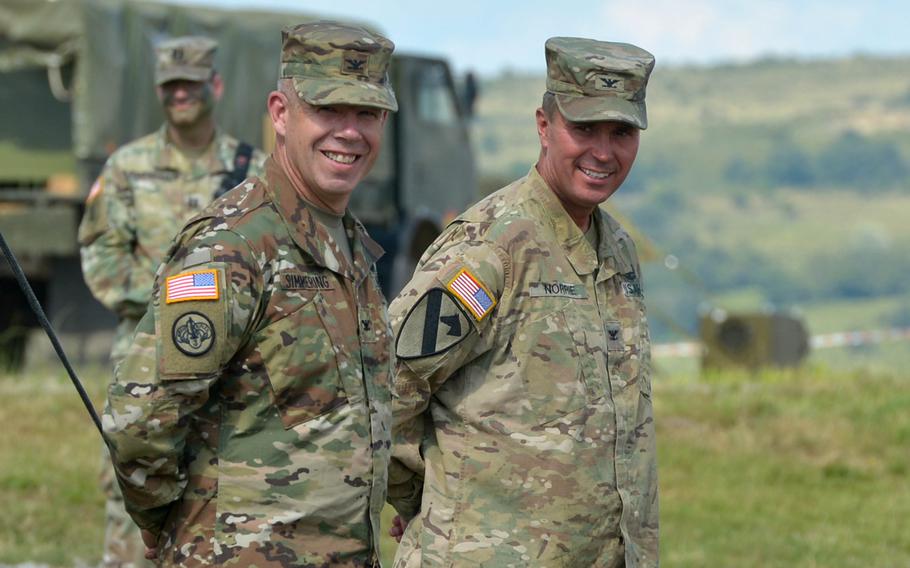 Then-Col. Christopher Norrie, right, and Col. Michael Simmering during a ceremony at the Center for Joint National Training in Cincu, Romania, in 2017. Norrie will lead the 7th Army Training Command in Grafenwoehr, Germany. (Michael Abrams/Stars and Stripes)

STUTTGART, Germany — Brig. Gen. Christopher Norrie, who led one of the first major tank unit rotations into Europe since the Cold War drawdown, was named the next head of the Army’s top training command on the Continent.

Norrie, who currently serves as deputy commanding general (maneuver) of the Fort Hood, Texas-based 1st Cavalry Division, played a key role in the U.S. Army’s first big push into eastern Europe back in 2017, when he led the 3rd Armored Brigade Combat Team, 4th Infantry Division, on a nine-month deployment along NATO’s eastern flank.

A recent reorganization at U.S. Army Europe means that in his new position, Norrie will have oversight of the Army’s four brigades permanently based in Europe, in addition to overseeing training efforts across the Continent.

In July, USAREUR shifted oversight of its brigades from its three-star commander to the 7th ATC in a realignment designed to free up the higher headquarters to focus more on strategic issues, while the training command manages tactical matters.

LaNeve, who led the 7th ATC during the transition, will next serve as director of operations, readiness and mobilization at the office of the Army’s Deputy Chief of Staff in Washington, the statement said.

It did not announce a date for the change of command.

In other moves in Europe, the Army said that Maj. Gen. William K. Gayler will serve as U.S. Africa Command’s next director of operations and cyber efforts at the command’s Stuttgart, Germany headquarters. He currently serves as commanding general at the U.S. Army Aviation Center of Excellence at Fort Rucker, Ala.