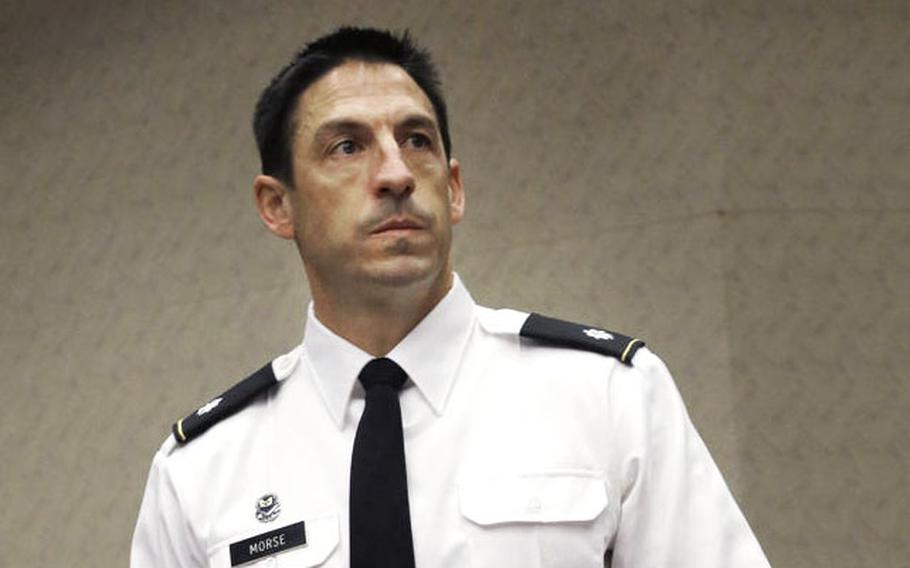 U.S. Army Lt. Col. Joseph “Jay” Morse waits to speak at the SMU Dedman School of Law in Dallas in November 2013. Morse, the top Army prosecutor for sexual assault cases, has been suspended after a fellow Army lawyer reported he groped her and tried to kiss her at a conference more than two years ago. (LM Otero/AP)

WASHINGTON — The top Army prosecutor for sexual assault cases has been suspended after a lawyer who worked for him recently reported he’d groped her and tried to kiss her at a sexual-assault legal conference more than two years ago.

Two separate sources with knowledge of the situation told Stars and Stripes that the Army is investigating the allegations levied against Lt. Col. Joseph “Jay” Morse, who supervised the Army’s nearly two dozen special victim prosecutors — who are in charge of prosecuting sexual assault, domestic abuse and crimes against children.

Attempts to reach Morse via phone and email for comment have thus far been unsuccessful.

RELATED: More Stars and Stripes coverage of sexual assault in the military Morse was removed from his job when the allegations came to light, one source said. To date, no charges have been filed in the case.

The suspension comes at a time the military is dealing with rising reports of sexual assault.

Morse, chief of the Trial Counsel Assistance Program at Fort Belvoir, Va., was responsible for Army prosecutorial training and assistance worldwide. He also was lead prosecutor in the case against Staff Sgt. Robert Bales, who pleaded guilty to the mass murder of 16 Afghan civilians in 2012.

Sources told Stars and Stripes that the Army lawyer alleged that Morse attempted to kiss and grope her against her will. The alleged assault reportedly took place in a hotel room at a 2011 sexual assault legal conference attended by special victims prosecutors in Alexandria, Va., before he was appointed as chief of the Trial Counsel Assistance Program.

The lawyer reported the incident in mid-February, and Morse was suspended shortly thereafter, according to one source.

An Army official who was not authorized to speak publicly about the matter confirmed an investigation was underway.

“We can confirm that this matter is currently under investigation and that the individual in question has been suspended from duties pending the outcome of the investigation,” the official said. “Given that this is still an open case, we are precluded from providing any additional information at this point.”

The suspension follows on the heels of a late February announcement by the Army it had suspended 588 troops and employees in “positions of trust” — including sexual assault response personnel — for suspected offenses including sexual crimes and alcohol abuse.

"This reads like an article from the Onion," said Nancy Parrish, president of Protect Our Defenders, in an email. “Unfortunately there is absolutely nothing funny about it.

"If true, this case is yet another disheartening example of the hollow pledges of ‘zero tolerance’ we have heard for more than 20 years,” Parrish wrote. “When the military has those at top of the chain who are in charge of fighting sexual assault accused of sexual misconduct at a conference on sexual assault it should be clear to every level headed human being [that] the status quo must be changed."

According to an Army biography, Morse was commissioned as an aviation officer in 1993 and became a judge advocate in 2001. Among his assignments, he has been a trial counsel, senior defense counsel and staff judge advocate. He received his law degree from the University of Arizona’s James E. Rogers College of Law, and is a graduate of Army’s Air Assault, Airborne and Ranger schools.

Last year, the former head of the Air Force Sexual Assault Prevention and Response Office, Lt. Col. Jeffrey Krusinski, was acquitted in civilian court of assault and battery against a woman who said he had grabbed her buttocks.

Stars and Stripes reporters Jennifer Hlad and Nancy Montgomerycontributed to this report.