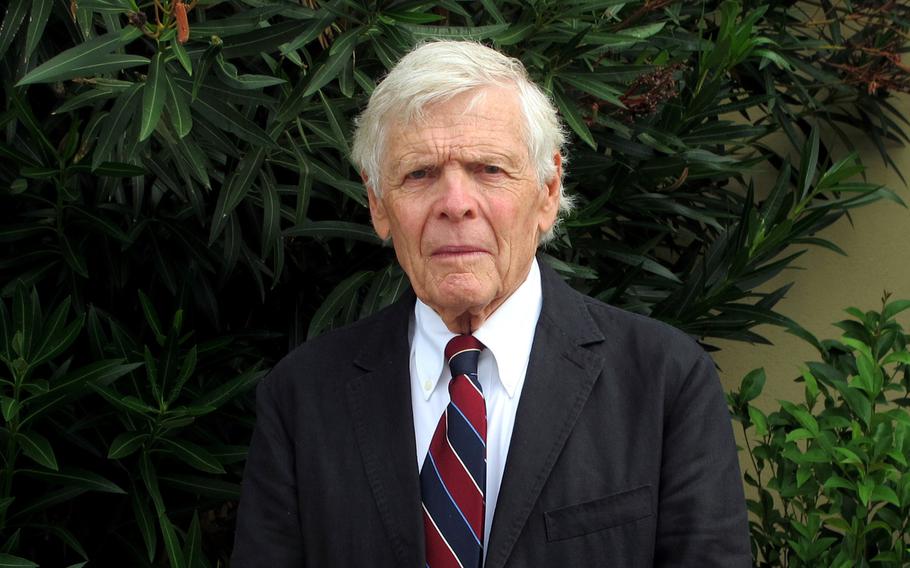 Aubrey Daniel, who successfully prosecuted Lt.William Calley for mass murder for his part in the 1968 My Lai Massacre, was honored Thursday at Caserma Ederle in Vicenza on Thursday, Aug. 16, 2018, by the Army Judge Advocate General Lt. Gen. Charles Pede. (Nancy Montgomery/Stars and Stripes)

Aubrey Daniel, who successfully prosecuted Lt.William Calley for mass murder for his part in the 1968 My Lai Massacre, was honored Thursday at Caserma Ederle in Vicenza on Thursday, Aug. 16, 2018, by the Army Judge Advocate General Lt. Gen. Charles Pede. (Nancy Montgomery/Stars and Stripes) Capt. Aubrey Daniel was 28 and four years out of law school when in 1970 he took on the highly watched, unpopular prosecution of Lt. William Calley for the mass murder of Vietnamese "old men, women, children and babies," as he told the jury of six officers. (Photos courtesy of U.S. Army Africa) 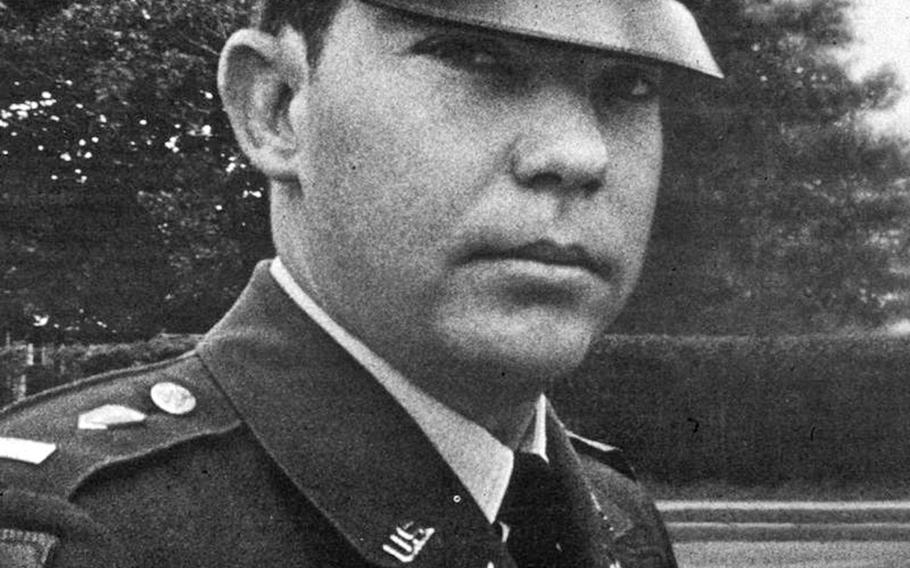 Lt. William Calley was found guilty at a court-martial in the spring of 1971 for the murders of unarmed, unresisting Vietnamese villagers and sentenced to life in prison. (Photo courtesy of U.S. Army Africa) Aubrey Daniel, who as an Army captain successfully prosecuted Lt. William Calley for mass murder in the My Lai massacre, was honored by the Army Judge Advocate General, Lt. Gen. Charles Pede, in Vicenza on Thursday, Aug. 16, 2018. Daniel was made a Distinguished Member of the Regiment for the Army JAG corps. (Photo courtesy U.S. Army Africa)

VICENZA, Italy — Capt. Aubrey Daniel won the sole conviction in some 30 cases against U.S. soldiers involved in the My Lai massacre, the worst atrocity in modern Army history.

His mostly extemporaneous closing argument in 1971 in the court-martial of Lt. William Calley is considered one of the greatest in U.S. jurisprudence and is studied in law schools to this day.

It was because of a letter of protest the captain sent to President Richard Nixon. He wrote it after Calley had been sentenced by a military jury to life in prison, and Nixon had instead ordered that Calley be returned to his quarters under house arrest while his verdict and sentence were “reviewed.”

Nixon’s order was in response to overwhelming, vociferous public opinion on the left and right — with angry letters, popular songs and draft-board resignation threats — that Calley was a scapegoat, or a patriotic young man doing his duty.

“How shocking it is if so many people across the nation have failed to see the moral issue which was involved in the trial of Lieutenant Calley — that it is unlawful for an American soldier to summarily execute unarmed and unresisting men, women, children, and babies,” Daniel wrote.

“But how much more appalling it is to see so many of the political leaders of the nation who have failed to see the moral issue, or, having seen it, to compromise it for political motive in the face of apparent public displeasure with the verdict.”

Nixon’s intervention, Daniel wrote, had further elevated a mass murderer of innocents into a national hero. It had injected politics into the judicial system whose “fundamental precept” was that the law must be free of it. It failed to uphold moral principles concerning protection of the weak and damaged the credibility of the military justice system.

The letter was “a magnificent expression of American idealism,” The New York Times said in an editorial the day after it printed it in full. It was a “courageous statement of what this country is really all about: respect for human freedom, for individual rights and for impartial justice under law.”

Fifty years after My Lai, in which more than 500 Vietnamese old men, women, children and babies were rounded up and killed, Pede said he wanted the lawyers under his command to remember what Daniel had done and represented as a legacy to the Judge Advocate General corps.

“It was the principled stand of Mr. Daniel that I’ve always admired,” Pede said at a ceremony with Vicenza’s military lawyers and paralegals. “What’s the right thing? Not what’s convenient or what will avoid criticism.”

Pede named Daniel, who lives in Italy and at 77 is in frail health, a Distinguished Member of the Regiment.

After the brief ceremony, Daniel talked at length to the Army lawyers about why he spent three days, emotionally spent from the court-martial, shut up in his office, sometimes breaking into tears, writing the letter.

Part of it had to do with fairness. Before the Calley case, he’d seen numerous soldiers sent to the stockade for drug offenses, no matter how minimal.

Calley was a mass murderer. “Shooting babies in their mothers’ arms — how does he get out of the stockade?” Daniel said.

Part of it was sorrow that the rule of law, central to a democracy, had been subverted, and anger that his work and that of the military jury of six officers who after considering the facts had upheld international law and universal morality had been denigrated by most of the country, he said.

“We got the conviction but I felt no pride. I was very sad at the country’s reaction,” Daniel said. “I had become the Antichrist. The level of hatred was enormous. I finally decided I had to say something.”

One lawyer asked whether his superior officers, informed he was writing the letter, had tried to stop him. No, Daniel said. All his staff judge advocate had said was “I wish you wouldn’t.”

Calley ended up serving only about three years in his apartment before he was a free man, after judges and Army officials repeatedly reduced his sentence. He lives today near Atlanta.

Perhaps paradoxically, Daniel’s sensational letter opened doors for him. He was asked to run for office or join in anti-war efforts; but he wasn’t interested in either politics or the limelight.

Instead he accepted an offer to join a premier Washington law firm, Williams & Connelly, founded by legendary, high-living trial lawyer Edward Bennett Williams. For the next several decades, Daniel, the son of a farmer with a sixth-grade education who’d previously wanted just a small law practice in Richmond, Va., represented all manner of defendants — Mafiosos, a drug king who threatened to kill him if he lost the case and numerous white-collar crime defendants.

He was once up against then-federal prosecutor Robert Mueller, the former FBI director who is now the special counsel investigating the Trump campaign’s ties to Russia.

One of his cases in the 1990s — defending the agricultural giant Archer Daniels Midland Co. from Justice Department prosecution for price fixing — became the topic of the movie “The Informant!” starring Matt Damon.

At the time of that trial, the Chicago Tribune described Daniel as “a pretty straight arrow, very independent-minded, not cut from a flamboyant litigator mold,” respected for “dissecting, and commanding, complex cases.”

He had never cried in his life, he said, until, at 28, just four years out of law school and in the Army only because he’d received a draft notice, he got the Calley case. Then, he cried even in the courtroom. It happened when he called his witness, Warrant Officer Hugh Thompson, the helicopter pilot who’d seen what was happening from the air. Thompson had repeatedly landed his helicopter, saved a dozen people Calley and his men were about to kill, and put a stop to the slaughter. Daniel asked Thompson his first question about that day.

The Calley case was a prologue to a long, illustrious, lucrative career for Daniel. For better or for worse, he said.