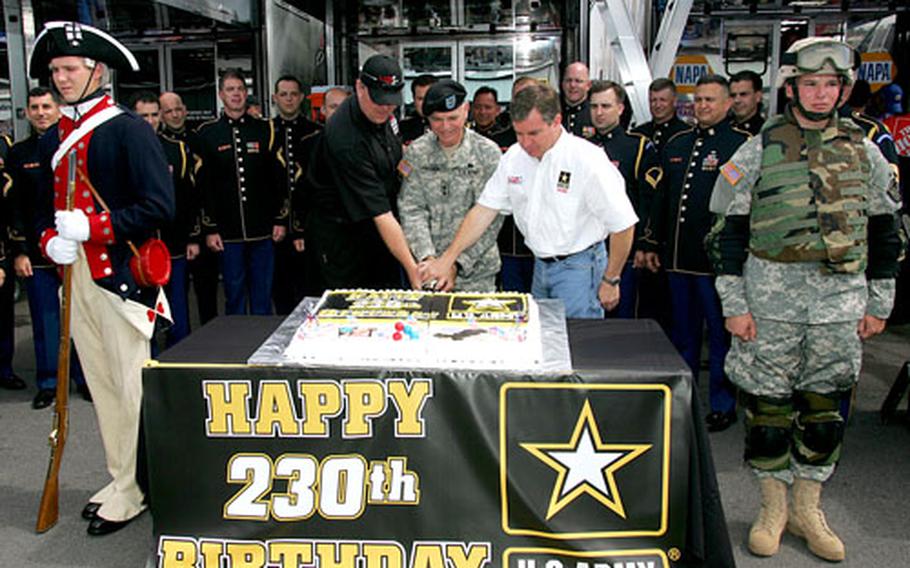 ARLINGTON, Va. &#8212; You know you&#8217;ve been knocking around the Army for a while when you start seeing things come full circle.

That&#8217;s certainly the case for the Army&#8217;s top enlisted soldier, Sgt. Major of the Army Kenneth O. Preston, who will mark his 30th year in the Army this June, just as his beloved service is celebrating its 230th birthday.

Preston has seen enormous changes in the Army since he first set foot in boot camp at Fort Knox, Ky., on June 30, 1975.

During his first enlistment, Preston belonged to 2nd Battalion, 8th Cavalry Regiment, which was part of the 1st Cavalry Division, based at Fort Hood, Tx.

&#8220;The armored cavalry took a lot of pride in that black beret,&#8221; Preston told Stripes during a June 8 interview in his Pentagon offices.

Amidst much controversy, Army Chief of Staff Gen. Eric Shinseki brought the black beret back in June 2001, this time as mandated garrison headwear for the entire Army.

So Preston took off the patrol cap, and once again, donned the beret.

How did it feel to put the old headgear on again, after more than 25 years of not wearing it?

Preston came at a pivotal time in the Army&#8217;s history: the transition from the conscript, or drafted, force to the all-volunteer Army.

Vietnam may have wrenched America&#8217;s soul, but the conflict also played a key role in shaping the future Army.

&#8220;There were a lot of lessons learned that came out of Vietnam that really led to the [Army&#8217;s] task organization and the organizations we formed after that,&#8221; Preston said.

And there was a wealth of experience for young soldiers to tap, in the form of the Army&#8217;s senior non-commissioned officers.

&#8220;There was a lot of buildup and a lot of tension with the Iron Curtain, the Berlin Wall. We really began assessing how we stood as an Army should we go to war with the Soviet Union.&#8221;

But in mid-1990s, with the fall of communism, and the end of the first Gulf War, U.S. officials decided it was time to start drawing down those Europe-based troops, and their numbers fell to about 62,000, Preston said.

Today, Preston is helping orchestrate a second major draw down of forces in Europe, even as the active Army is growing once again, from 470,000 to 510,000 to meet the needs of the war on terror.

In 30 years: Preston has seen the entry of the Abrams main battle tank (he helped do the tests that led to its fielding), the Bradley Fighting Vehicle, the Humvee, and now, the Stryker wheeled armored vehicle.

Preston chuckled, still pleased with his unit&#8217;s prowess almost 30 years after the fact.

1980: The first M1 Abrams Main Battle Tank rolls off the production line at General Dynamics Land Systems. Named after Gen. Creighton Abrams, the tank is designed to dominate in Europe&#8217;s fields against a possible war with the Soviet Union.

1984: The AH-64 Apache attack helicopter enters the Army inventory. The helicopter can perform day and night, in almost any weather condition.

Oct. 25, 1983: Operation Urgent Fury, the invasion of Grenada, begins. The initial assault includes 1,200 U.S. troops, expanding to more than 7,000. By mid December, U.S. combat forces are on their way home, and a pro-American government is taking power.

December 1995: Operation Joint Forge. &#8220;Task Force Eagle,&#8221; led by the Germany-based 1st Armored Division, enters Bosnia as part of a NATO Implementation Force, or IFOR. The U.S. military maintains a steady force of about 6,900 personnel in Bosnia until 1994, when the European Union takes over the peacekeeping mission.

Sept. 11, 2001: Terrorist attacks on the United States target the Twin Towers in New York and the Pentagon and open the ongoing war on terror.

Sept. 24, 2001: President Bush declares a state of national emergency, allowing the nation to mobilize the military&#8217;s reserve forces for war.