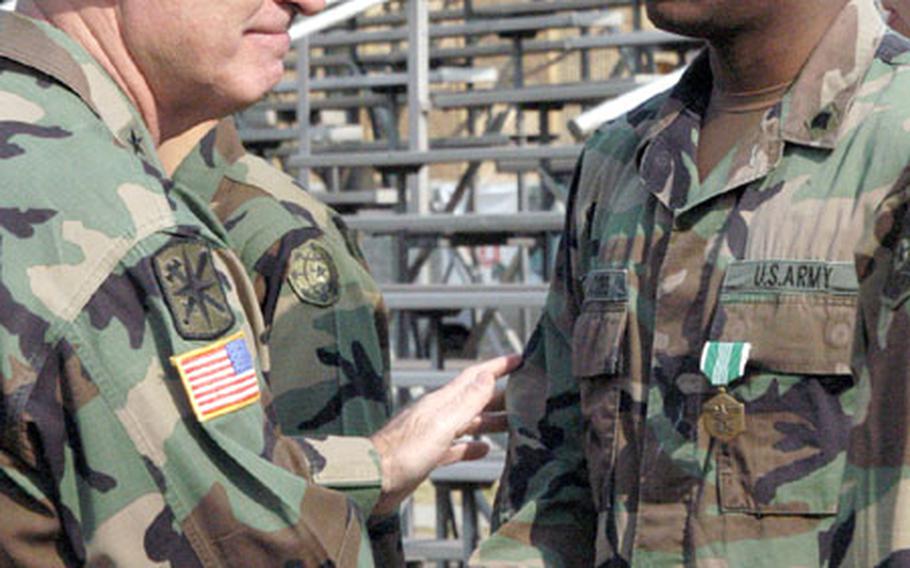 YONGSAN GARRISON &#8212; When the Army&#8217;s top law enforcement officer visited with military police throughout South Korea earlier this month, he also made time to honor a young soldier whose quick thinking may have saved a Korean woman&#8217;s life.

During a meeting with the 19th Military Police Battalion, which supports criminal investigators in South Korea and Japan, Maj. Gen. Donald Ryder attended a brief ceremony honoring Pfc. Terrence Jacobs, of LaFayette, La., a mechanic with the unit.

Jacobs was leaving Yongsan the afternoon of April 7 when he saw a Korean woman lying in a car. He rushed over, realized she was choking, and performed the Heimlich maneuver on her, according to Command Sgt. Maj. Benjamin Kellam, the battalion&#8217;s ranking enlisted soldier. Jacobs said the woman quickly became alert again after resuming breathing; Korean officials rushed her to a hospital.

Of the criminal investigators&#8217; work in South Korea, Ryder said Thursday morning, &#8220;The commanders are very pleased with their performance.&#8221;

The U.S. investigators execute their mission similarly to other military police units throughout the world, he said; the difference is that they work so closely with their South Korean counterparts.

Members of the criminal investigation unit in South Korea &#8220;feel they really have a mission here on the peninsula,&#8221; said Ryder. &#8220;The uniqueness is the strategic defense with the Koreans.&#8221;

&#8220;This time, it really jumped out at me,&#8221; said Ryder, who has visited South Korea several times in the four years he&#8217;s commanded the criminal investigations unit.