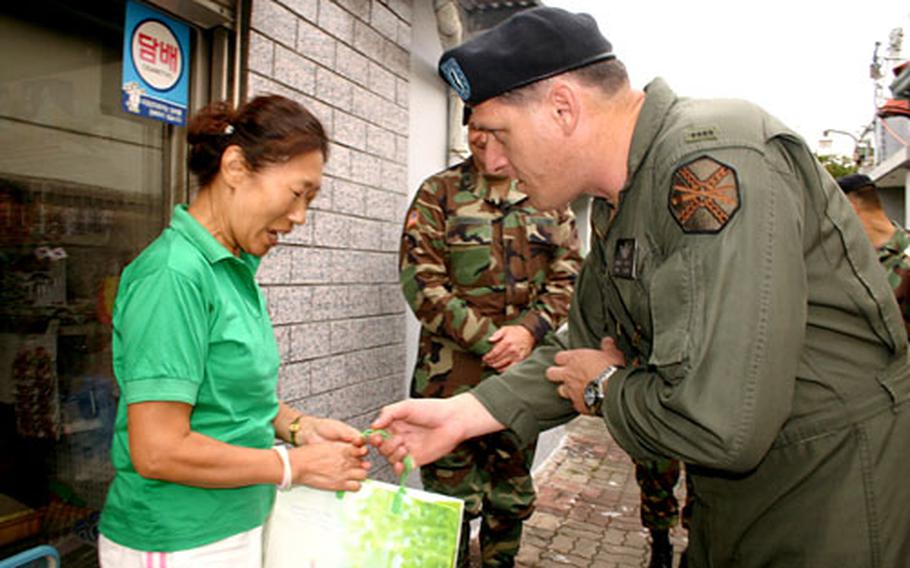 PYEONGTAEK, South Korea &#8212; As they have for nearly a decade, U.S. Army officials in southeastern South Korea gave holiday gifts of food to residents near their installations on Thursday.

Officials in Daegu and Waegwan gave the oxtails as a goodwill gesture on the occasion of Chuseok, South Korea&#8217;s biggest annual holiday. The Army bought the oxtails at the Camp Walker commissary.

But the gift-giving triggered an article on a South Korean news Web site that said the oxtail was unsafe to eat &#8212; an assertion the Army later denied &#8212; and that the Army broke South Korean ration control laws in distributing its commissary merchandise to off-post Korean residents.

The article on South Korea&#8217;s Kuki News site said beef from the United States is banned in South Korea because of fears of mad-cow disease. South Korea banned import of U.S. beef in 2002.

However, the fears about the oxtail gifts are groundless, said Kevin Jackson, spokesman for the Area IV Support Activity at Camp Henry in Daegu.

And, he added, the Army had no intention of violating South Korean ration control laws with the gifts.

Officials went door-to-door giving the oxtails to residents at 110 homes near the Walker Army Heliport in Daegu and 15 homes outside Camp Carroll in Waegwan, Jackson said.

&#8220;We know our meat meets the most stringent food handling and safety requirements,&#8221; he said. &#8220;We take great care of the products that are brought into the commissary, so everyone in the community consumes that food. And we are comfortable with the fact that that food is safe.&#8221;

The Kuki News report also said the U.S. military is permitted to bring beef into South Korea only for sale in its commissaries to members of U.S. military communities, and that its tax-free commissary goods may not be distributed to local Korean residents.

&#8220;Should there possibly be a violation of ration control concerning the distribution of these gifts, we will take precautions of checking with the appropriate authorities to ensure that this does not happen at any time in the future,&#8221; Jackson said.

&#8220;Our intentions were purely good and it was to greet the residents outside our installations on the occasion of their most important holiday of the year, Chuseok.&#8221;

In recent years the gifts were sets of canned tuna, but the Army decided to give oxtail this year because it&#8217;s an especially popular item among South Koreans, Jackson said.