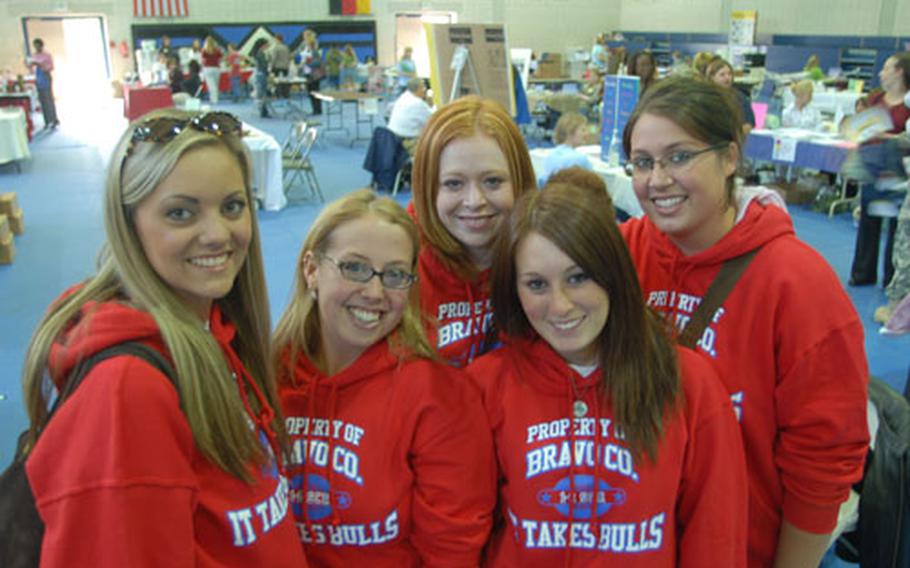 Army Community Services, with the help of 2nd Cav, is showcasing services for families of deploying soldiers at a pre-deployment &#8220;rodeo&#8221; at Vilseck&#8217;s Memorial Fitness Center this week.

On Monday, spouses, often accompanied by small children, wandered through the gym checking out a range of support services &#8212; from educational and recreation activities to lists of emergency phone numbers &#8212; offered within U.S. Army Garrison Grafenw&#246;hr.

Second Cav officials were not able to say how many spouses will be left behind in Germany or how many families will return to the States while their soldiers are deployed. But Ruth Cowart, the Family Readiness Support assistant for 3rd Squadron, 2nd Cav, said there are many advantages for spouses who stay in Vilseck.

&#8220;They have a ready-made support system here. They are all in the same boat whereas family and friends back in the States don&#8217;t have the same perspective as the spouses who remain here,&#8221; she said.

Support agencies at Vilseck will often be staffed by 2nd Cav family members, Cowart said, &#8220;&#8230; so there is that little extra caring and giving to the family members because they understand what you are going through.&#8221;

Spouses can face a range of challenges while their soldiers are away, she said.

Families who stay also will be close to people who have direct contact with the spouse downrange, she said.

Some people will still head back to the States, mostly for the comfort of familiar surroundings and to be with friends and family, Cowart said.

Second Cav has created a virtual Family Readiness Group allowing families to keep up to date through e-mail and a Web site. Efforts are under way to establish points of contact in the U.S. for family members, she said.

One of the 2nd Cav spouses at the rodeo was Nivia Wilkinson, whose husband, Capt. Dominick Wilkinson, is getting ready to deploy. Nivia said she&#8217;ll stay in Vilseck with her two young daughters, Karisa, 3 and Tyler, 4.

&#8220;I&#8217;m staying close and getting all the information firsthand. My husband has been deployed before and staying close to the unit is the closest thing you have to being with him,&#8221; she said.

All the spouses at Vilseck will be in the same situation, she said.

A group of women married to soldiers from the same 2nd Cav company came to the rodeo in matching red Company B sweatshirts. Alese Walter, whose husband is Sgt. Derk Walter, said she&#8217;s staying in Vilseck because of the support of the other wives.

&#8220;They know what you are going through and, God forbid, if something happens, you are going to be here for them (your spouse) a lot sooner,&#8221; she said.

Melissa Garner, whose husband is Spc. Mike Garner, said she&#8217;s going back to her own house in Oregon, next door to her parents. She said she will study business management in Oregon but stay in touch with her friends in Vilseck over the Internet and through phone calls.