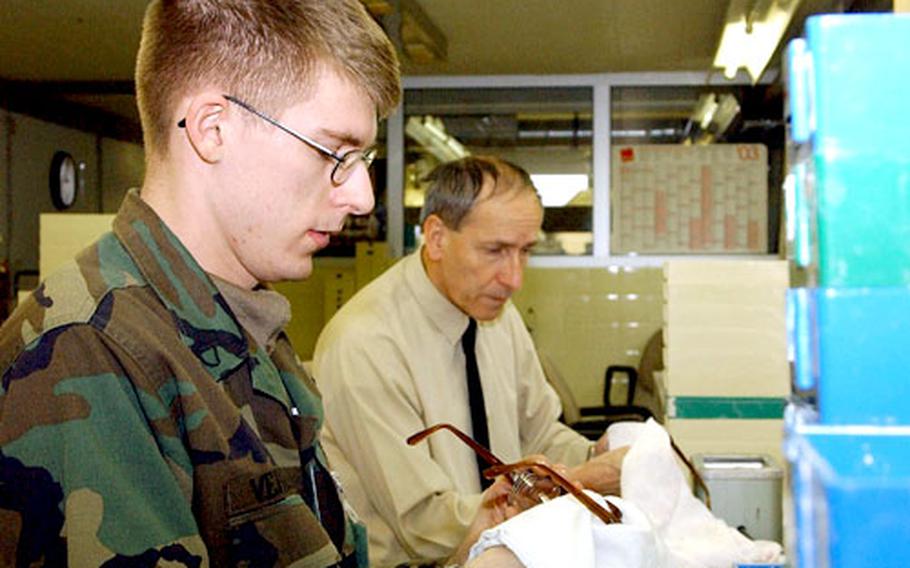 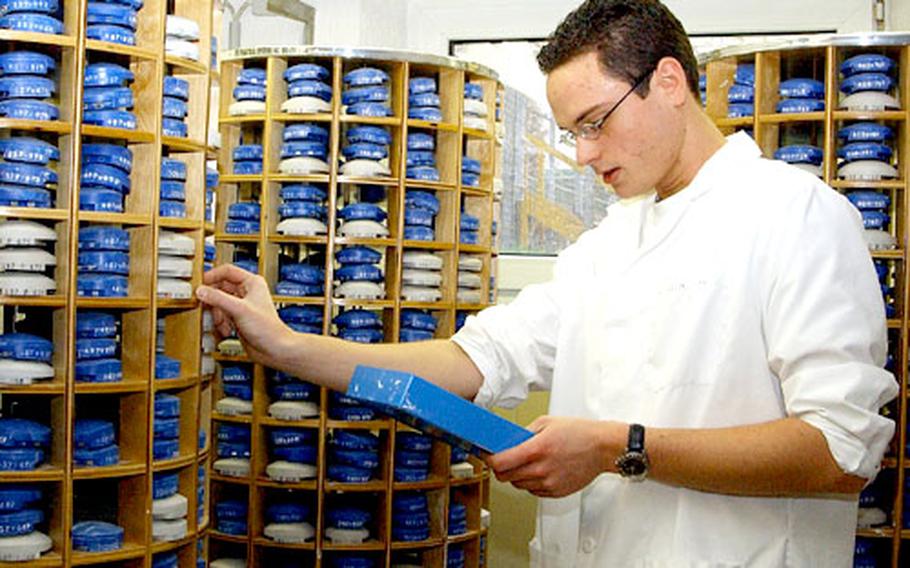 Timo Neumayer, an optician with U.S. Army Medical Materiel Center, Europe, looks to fill an order for eyeglasses in the facility’s optical fabrication lab. The blue and white discs have different curvatures used to sand and shape lenses for virtually any vision power. (Lisa Horn / S&S)

PIRMASENS, Germany &#8212; The life span for a pair of eyeglasses in Iraq is about two months.

&#8220;Because of the sandstorms just beating on the glasses, they aren&#8217;t useful,&#8221; said Sgt. 1st Class Kyle Brunell, noncommissioned officer in charge at the U.S. Army Medical Materiel Center, Europe.

Brunell and the rest of the center&#8217;s staff have been busy lately, filling orders for servicemembers who are on their way downrange or are already there. Prior to the Sept. 11, 2001, attacks, the center produced an average of 4,900 glasses a month. Since the attacks, total orders have increased to 7,500 a month, with about 1,200 of those glasses going to soldiers downrange.

In addition to manufacturing glasses, the center purchases, stores, distributes and maintains medical equipment and supplies for the European theater and southwest Asia.

Currently, a soldier is allowed to receive four to five glasses or optical inserts a year. That typically includes one pair of the Army&#8217;s S-9 glasses &#8212; the ones with the thick, dark frames; a pair of optical inserts for gasmasks or goggles; and one pair of glasses with the servicemember&#8217;s frame of choice.

And when one of those pairs is broken, the materiel facility must make sure they are replaced as quickly as possible, said Col. Jettaka Signaigo, center commander.

Depending on their unit&#8217;s location, soldiers can have their eyes checked while downrange. In most cases, glasses can be made in about 45 minutes at optical fabrication facilities in Baghdad, Qatar or Bagram air base, Afghanistan.

Special optical needs, however, such as bifocals or sunglasses, must be handled by the Pirmasens center. New glasses can usually get to a soldier within a week, thanks to the speed provided by e-mail ordering.