Army's last MASH unit stretched to its limits in Iraq 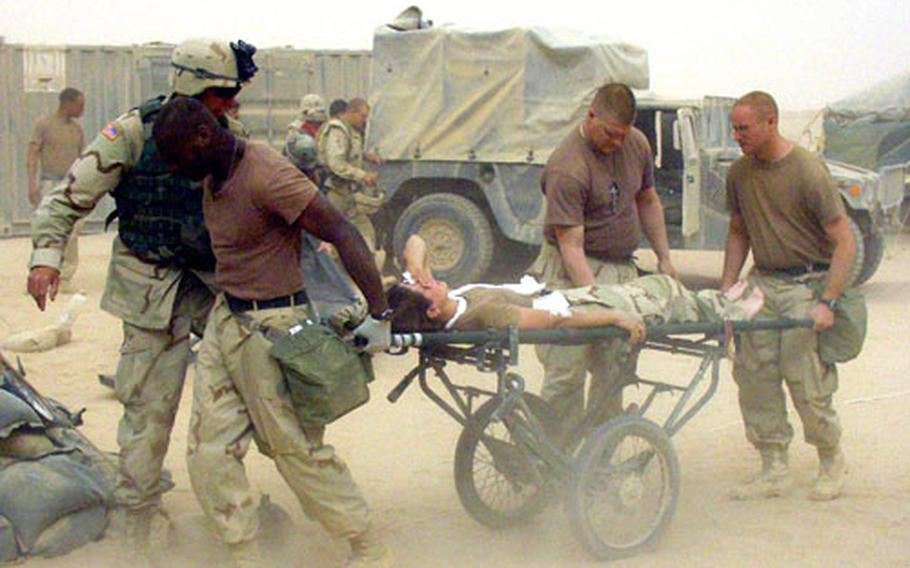 Medics wheel an injured soldier, just unloaded from a Black Hawk medevac helicopter, into the 212th MASH during a sandstorm earlier this week. (Steve Liewer / S&S)

Medics wheel an injured soldier, just unloaded from a Black Hawk medevac helicopter, into the 212th MASH during a sandstorm earlier this week. (Steve Liewer / S&S) 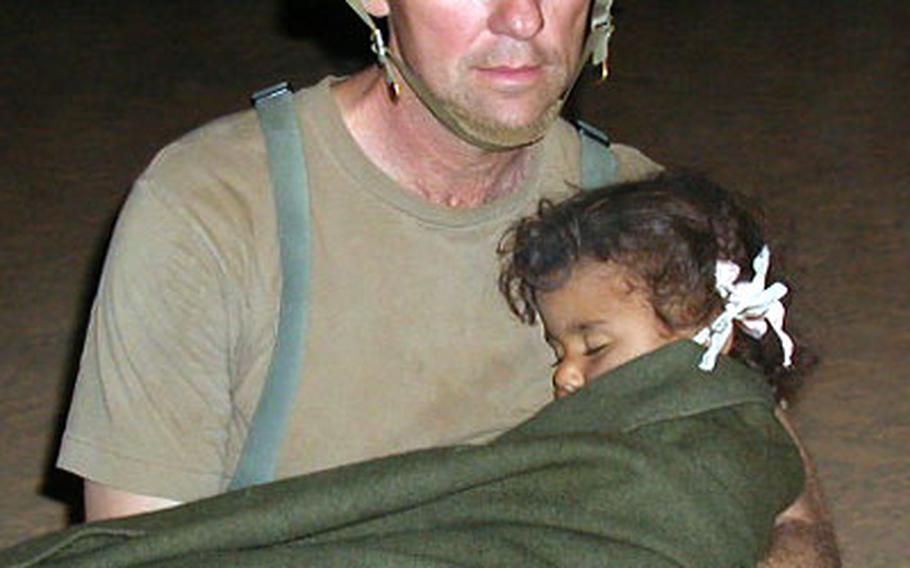 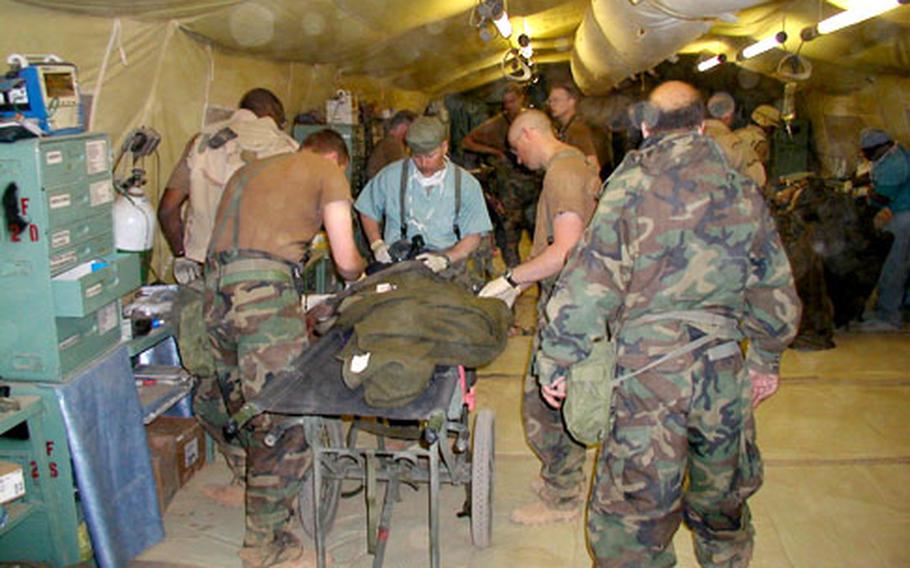 Doctors, nurses and medics gather round to treat an Iraqi patient in the emergency room of the 212th MASH in central Iraq. (Ron Krogh / U.S. Army) 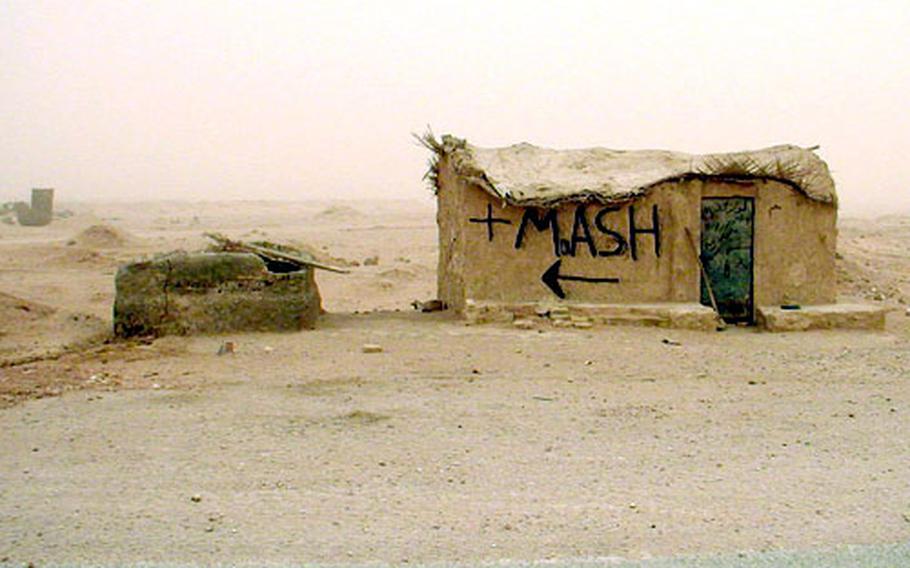 WITH THE 212TH MOBILE ARMY SURGICAL HOSPITAL, Central Iraq &#8212; Black Hawk helicopters settle in the ankle-deep dust, unloading injured soldiers and Iraqi citizens around the clock so medics can roll them into the canvas emergency room.

But the battle for Baghdad has stretched the MASH to its limits. Since setting up two weeks ago at a camp not far from the Iraqi city of An Najaf, the hospital&#8217;s staff of nine doctors and 29 nurses has seen about 300 patients, given 371 X-rays and performed 49 surgeries. Most of those have been done since the middle of last week.

The 212th MASH was called for service in the Middle East in late January and wound up at Camp Udairi, Kuwait, alongside the 86th Combat Support Hospital.

It left Kuwait in a convoy March 21 for the 300-mile journey to central Iraq. The unit&#8217;s 160 soldiers loaded their entire hospital &#8212; including an emergency room, operating rooms, decontamination section, intensive care unit, laboratory, radiology section and pharmacy &#8212; into 37 5-ton trucks and five Humvees.

The trip turned into a test of endurance, which was sometimes dangerous. The medical convoy at times passed the infantry division that was supposed to clear the way for it.

After a nearly sleepless 78-hour journey, the MASH team arrived at the central Iraq site in the midst of a horrific sandstorm that continued nearly continuously for three days.

The 212th MASH differs from the Army&#8217;s combat surgical hospital in its size and mobility. It has only about one-eighth as many beds and one-fourth as many people as the CSH. Every single item is designed to be packed up and moved to the field on short notice.

But the Army has been eliminating its MASH units and consolidating them into larger combat support hospitals, figuring smaller mobile hospitals can be sliced off from the unit and sent where they&#8217;re needed. The 86th CSH already has spun off a 44-bed hospital at Talil air base near An Nasiriyah, and two smaller field hospitals are being set up in the V Corps area.

As it is set up in central Iraq, the core of the 212th MASH is a series of canvas tents that creates something similar to hallways. Slightly larger rooms, such as the intensive care units, branch off from the halls. The operating room and lab come in containerlike modules that can be isolated and sterilized &#8212; the only dust-free areas for miles around.

Medics deliver the patients to a long, narrow room wide enough for a stretcher. There, injuries are assessed and the patients are then wheeled to X-ray, to intensive care or to surgery.

At the peak late last week, Canestrini said, the hospital had 51 patients. Some doctors gave up their sleeping cots to make way for injured soldiers.

Typically, the hospital tries to move patients along to the hospitals at Talil or Udairi within 24 hours, to make room for more. Seriously wounded soldiers eventually are taken to the Army hospital in Landstuhl, Germany.

Ten soldiers have died at the MASH. On Sunday, two Army captains died en route after fighting in Karbala.

Iraqi patients &#8212; including many civilians with gunshot wounds &#8212; are not allowed to leave the country. Canestrini said they are working to find Iraqi hospitals to which they can transfer them. He said Iraqis are treated the same as other patients. One ward is reserved for enemy soldiers, another for civilians.

All of Canestrini&#8217;s personnel have the acronym written in black marker on their brown Army-issue T-shirts, and he hands out coffee cups bearing the unit&#8217;s logo.

He does enforce military standards in his unit a bit more strictly than did his television counterparts.

What isn&#8217;t different is the long hours of work under great pressure.

Canestrini is a big booster of the MASH concept, which was created at the beginning of the Korean War. He likes his small, tight-knit staff, ready to move on short notice.

But it is a losing battle. Within two years, he said, his unit will be beefed up with hundreds of transfers from the 67th CSH in W&#252;rzburg, Germany.

The 212th will be given a new name. It is descended from a hospital unit created in World War I, and it has 20 battle streamers. Before Canestrini goes home, it will earn its 21st. Then the Army&#8217;s last MASH will fade away.