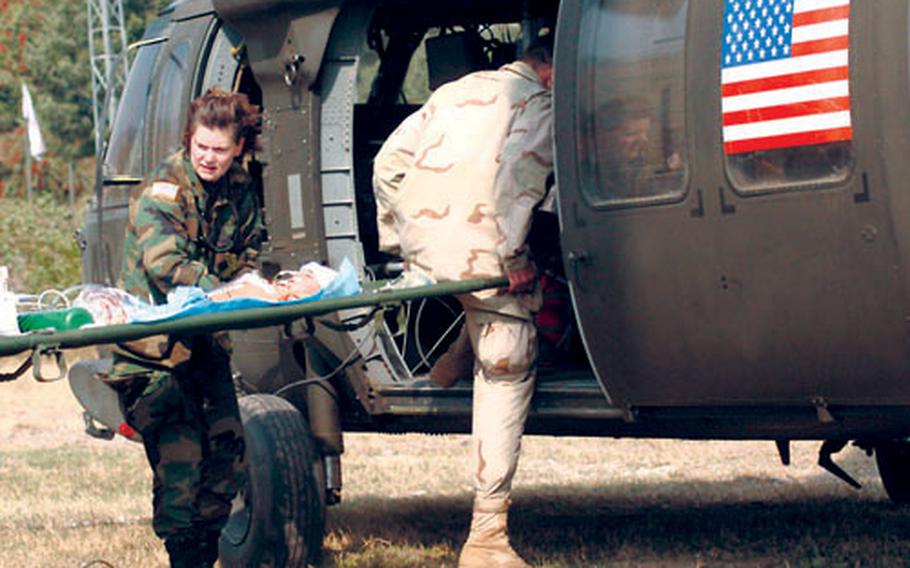 Lt. Col. Linda Lebedovych helps evacuate a baby in November 2005 to an Islamabad hospital after the baby spent the night attached to a ventilator in the 212th MASH ICU. The MASH donated its entire mobile hospital to Pakistan and will return home to Germany within the week. (Courtesy of the U.S. Navy)

The Army&#8217;s last MASH unit is getting ready to return to Germany after spending four months in Pakistan to treat quake victims.

The 212th Mobile Army Surgical Hospital will return to its home at Miesau, Germany, from Muzaffarabad, Pakistan, within the week, Sgt. 1st Class David Cardona said Friday. The unit donated $4.6 million worth of tents, radiology equipment and surgical tables &#8212; its entire mobile hospital &#8212; to Pakistan to continue relief efforts, according to the U.S. Embassy in Pakistan.

The 212th is switching from the familiar MASH designation to a Combat Support Hospital, which the military calls CASH for short, and will not need the mobile hospital when it makes the change. A CASH is designed to be more flexible, with surgical squads that go out into the field.

The 212th handed over the mobile hospital to Pakistan during a ceremony Thursday in the Himalayas. The unit treated more than 20,000 patients and vaccinated 8,000 people in Pakistan since October, according to a U.S. European Command press release.

The Army MASH has been around since World War II, but it became a household name when the TV series of the same name ran in the 1970s and early &#8217;80s. Many of the soldiers know the history of the units but never saw the show until it went into syndication. Some of the members of the unit probably haven&#8217;t seen the show at all, Cardona said.

Cardona, who works for the unit&#8217;s rear detachment in Germany, said families of the soldiers are excited that everyone is finally coming home. The unit deployed to Pakistan shortly after a deployment to Angola.

The soldiers will be welcomed home in a small get-together in the base gym. After a month of leave, they will get to work on changing from a MASH to a CASH. The unit is expected to get 150 more soldiers and additional equipment, Cardona said.