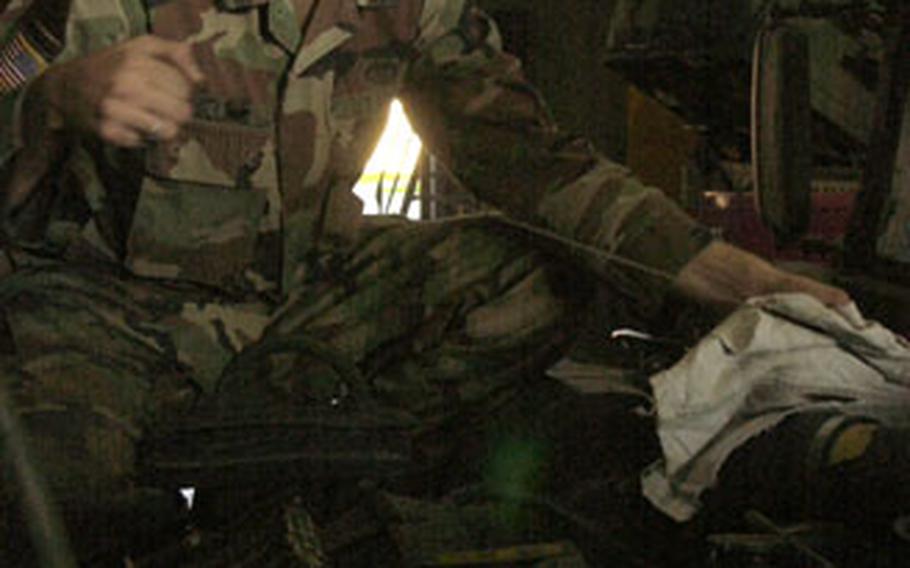 Army Spc. James Millard, the security manager for the 212th Mobile Army Surgical Hospital at Miesau Ammo Depot in Germany, checks the oil on a Humvee before deploying to Pakistan. (Scott Schonauer / S&S)

The 212th MASH, based at Miesau Ammo Depot and comprised of mostly doctors and nurses from Landstuhl Regional Medical Center and Heidelberg&#8217;s Army hospital, got the order two days ago and will be in Pakistan this weekend.

The 1st Armored Division&#8217;s 123rd Main Support Battalion, based in Dexheim, will join the medical team, according to a U.S. Army Europe news release. The battalion will send a water-purification detachment, which has equipment to make dirty, undrinkable water potable.

Soldiers from the 212th on Friday fixed Humvees and packed up medical supplies and water to head to an area hit by the Oct. 8 quake. The deployment length is indefinite.

Col. Angel Lugo, the 212th commander, said the unit is excited about the opportunity to go and help. He said that they are expecting to offer &#8220;intermediate care or minimal care type support to handle the casualties you would expect after an earthquake or disaster,&#8221; he said.

The 212th is the last MASH unit in the Army and has about 130 people able to deploy anywhere around the world on a moment&#8217;s notice.

Landstuhl is the Army&#8217;s largest hospital outside of the United States and continues to treat wounded servicemembers from Iraq and Afghanistan in addition to military personnel and their families stationed in Europe. The deployment will mean the military will have to make adjustments at Landstuhl to compensate for the loss of personnel.

&#8220;We are working to cross level resources within our European Army and Air Force facilities to make up for any personnel shortfall,&#8221; said Landstuhl Regional Medical Center Commander Col. W. Bryan Gamble. &#8220;There likely will be some short-term adjustments that need to be made as we continue to maintain our mission focus on care for combat sick and wounded.&#8221;

The unit is only weeks removed from its last deployment. Members of the 212th deployed to Angola on a humanitarian relief mission this summer and returned just three weeks ago.

1st Lt. Jeanie Lightfoot, an intensive care nurse from Landstuhl who is deploying, said many members would apply what they learned from the trip to Angola to their mission to Pakistan. She is looking forward to helping patients.