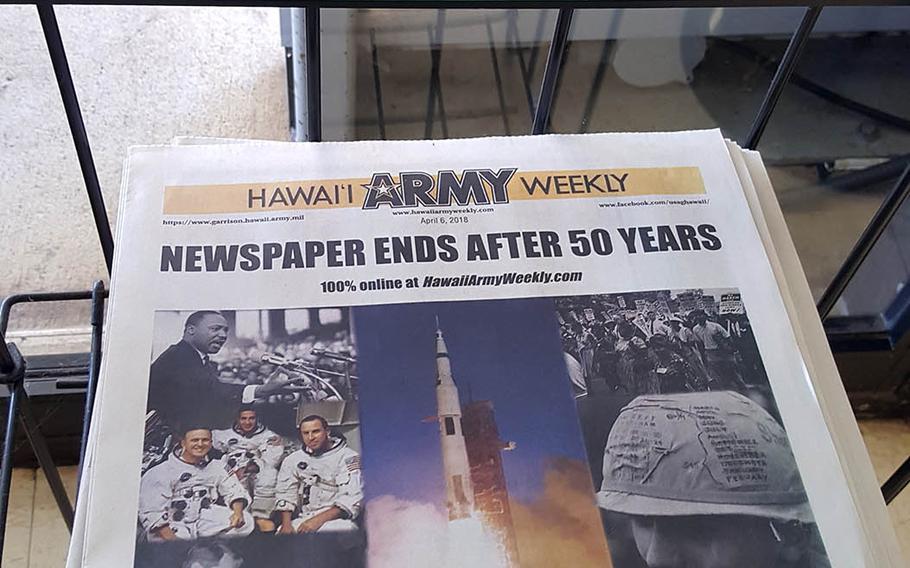 FORT SHAFTER, Hawaii — After a half-century on newsstands, the printed version of Hawaii Army Weekly is ending distribution to the state’s Army bases.

“Due to rising printing costs and a 21st century generation who gets its information online, we’re putting the weekly newspaper to bed and moving 100 percent to HawaiiArmyWeekly.com — accessible everywhere, anytime, and updated daily,” Maj. Gen. Ron Clark, commander of the 25th Infantry Division and U.S. Army Hawaii, wrote in the final print edition on April 6.

The newspaper is published under the auspices of Army Garrison-Hawaii’s Public Affairs Office and was printed by the Honolulu Star-Advertiser.

The majority of its articles are penned by writers from various public affairs offices at Army units, primarily at Schofield Barracks and Fort Shafter. They will continue to submit articles for online publication.

The newspaper began at the height of the Vietnam War in 1968, a year that brought the Tet Offensive by North Vietnamese forces and the deaths of almost 17,000 American troops. Hawaii was both a hopping-off point for soldiers heading in country and a destination for leave.

One of the newspaper’s original columns was titled “Vietnam Vignettes.”

The staff dedicated to publishing Hawaii Army Weekly has steadily dwindled in the past 15 years, wrote Aiko Rose Brum, the chief of internal communication with the garrison’s public affairs office.

Fourteen soldiers and civilians worked side by side in 2005 to put out the weekly. A staff of two civilian employees and two contractors were doing that job in the final weeks of the newspaper, wrote Brum, who has managed the paper for the past 14 years.

The demise of the Army weekly’s printed version comes three years after Marine Corps Base Hawaii stopped printing its weekly Hawaii Marine newspaper in the fall of 2015.

Across the Pacific, the final edition of the Morning Calm — the last surviving Army newspaper in South Korea — ran off the press late last month. The peninsula-wide institution detailed the lives of soldiers from Busan in the south to Camp Casey near the Demilitarized Zone.

Closing the newspaper will give public affairs staff more time to focus on local news and communicate with communities online, a Camp Humphreys spokesman said.