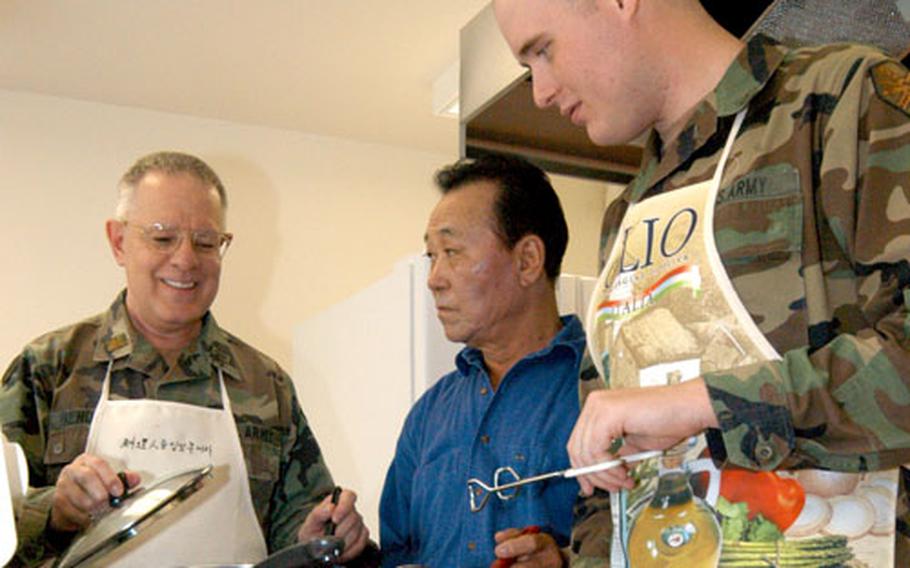 PYONGTAEK, South Korea &#8212; Back when Army Maj. Richard Bendorf was a small boy in southern Illinois, he liked to follow his grandmother around the kitchen and watch her demonstrate her great talent for cooking.

It was the beginning of his lifelong love of cooking. And now, Bendorf, 61, the Area IV chaplain based at Camp Walker in Taegu, South Korea, plans to write his own cookbook.

The cookbook will contain some of the many recipes he&#8217;s accumulated over decades, as well as short narratives of his experiences with recipes, restaurants and other culinary matters, he said.

A big part of Bendorf&#8217;s enthusiasm for cooking, he said, is the &#8220;therapy&#8221; it affords from the heavier parts of a chaplain&#8217;s work. He holds a master&#8217;s degree in social work and counsels members of the military community about personal problems.

&#8220;My interest in the culinary arts dates back to I guess when I was probably seven or eight years old,&#8221; he said. &#8220;My grandmother was not only an excellent baker, but she was the head cook for a school system in southern Illinois. And I used to walk around behind her, and I kind of learned early on how to cook and how to bake.

Bendorf has a Web site at www.frianfriar.com, which includes a few recipes, such as garlic-herb encrusted crostini and yogurt-berry custard.

&#8220;We&#8217;ve got an e-mail address and people periodically send recipes and pictures and also stories to me. And my idea is also to incorporate them into the book. So all the experiences won&#8217;t necessarily be my own. But it&#8217;ll be kind of an eclectic compilation,&#8221; he said.

&#8220;It doesn&#8217;t take a genius to be a really fine cook,&#8221; he said. &#8220;What you need is some good ingredients, and some of the basic ingredients that I use are a good extra virgin olive oil, good cracked pepper, fresh ground pepper, fresh ground sea salt and herbs, a variety of herbs. And with those things you can do a tremendous amount in a kitchen. But those are just some of the basics.&#8221;

But he&#8217;s shared his cooking with others in the Taegu-area military community, often in dinner gatherings for six or so people.