Army’s focus is on stress 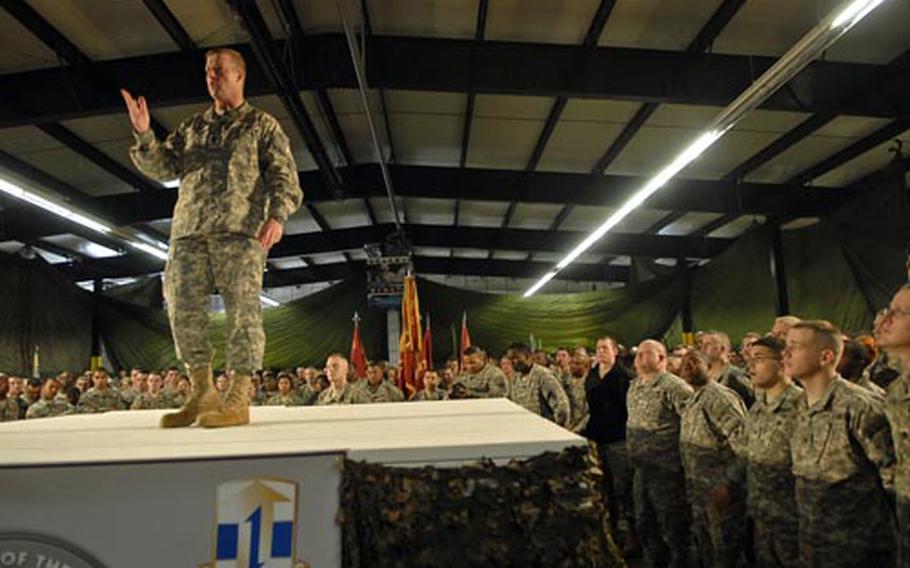 Sgt. Maj. of the Army Kenneth Preston spoke to soldiers Wednesday at Rhine Ordnance Barracks in Kaiserslautern, Germany. Preston discussed stress on the force, increased dwell times at home, and what the Army&#39;s doing this year to recognize its noncommissioned officer corps. (Jennifer H. Svan / S&S)

KAISERSLAUTERN, Germany &#8212; When Sgt. Maj. of the Army Kenneth Preston and the military services&#8217; other senior enlisted advisers met with President Barack Obama on Jan. 30, Preston told him his biggest concern in the Army was stress on the force.

Suicide, domestic violence, sexual assault, acts of misconduct, post-traumatic stress disorder are all on the rise &#8212; and indicators of the increased pressures faced by soldiers and families, Preston told Obama.

Those "warning lights" again took center stage when Preston spoke to more than 1,000 soldiers Wednesday during a brief stop in Kaiserslautern, on the way home from a military trip to Ukraine.

"The stress on the force is all-encompassing," he said, from preparing to deploy to trying to fit back into the family after a long combat tour.

Preston assured soldiers that the Army was taking steps to mitigate that pressure and reduce the perceived stigma of seeking mental health care.

"We do believe there&#8217;s a stigma out there," Preston said in an interview prior to addressing soldiers. Some soldiers don&#8217;t seek help out of fear it will make them appear weak, he said.

Preston spoke of ongoing Army efforts to reduce those barriers, from the new interactive training video all soldiers will be required to watch to ongoing stand-down days to talk exclusively about suicide prevention. One option being looked at by the Army, he said, is allowing individuals to communicate with a counselor online so they can remain anonymous.

NCOs are "really the glue that has held our forces together" during the war on terror, he said. The campaign is designed to recognize NCOs&#8217; contributions and showcase their successes to Congress and the public, he said.

The Army&#8217;s top enlisted leader for the last four years also wanted to hear from soldiers, opening the floor to questions for more than 30 minutes.

One soldier, recently returned from a deployment to Afghanistan and headed to a two-year assignment stateside to be a drill instructor, asked "what do I have to look forward to?" After 24 months of "long hours, long days" would he have to deploy again?

Unfortunately, the soldier was told, there are no free passes.

A soldier at some point in his career has to step up to the plate and "do something special" to advance one&#8217;s career, he said.

But Preston offered this good news: Units coming out of the fight right now are getting 15 to 16 months between deployments. By late summer, units returning home will see about 18 months of dwell time, he said.

The most emotionally charged question came from Sgt. Chanel Hall-Foisey, 27, a paralegal with the 1st Armored Division in Wiesbaden, Germany. She wanted to know if the Army was doing anything to keep parents of young children from deploying at the same time, "considering it&#8217;s not healthy for the child."

Preston said it&#8217;s an issue that needs to be worked through one&#8217;s command, "to see if they can split you up," or try to get assigned to different units that wouldn&#8217;t be deploying together.

It wasn&#8217;t the answer Hall-Foisey was looking for. While she isn&#8217;t facing that plight, she&#8217;s worked with dual military couples who have, including parents who had to leave their 6-month-old with grandparents for an extended period. She thinks the Army needs to address the issue through policy &#8212; and not leave it up to the whims of a commander.