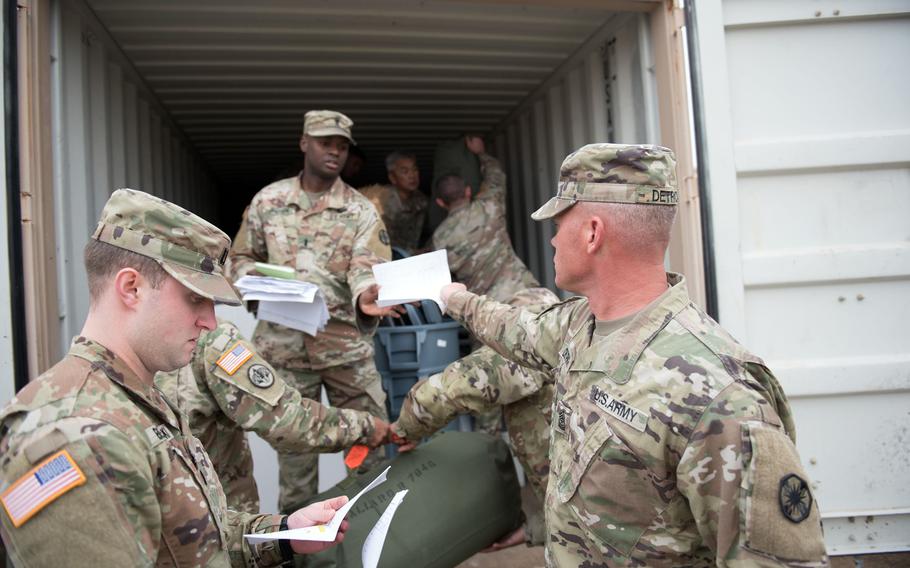 Sgt. Maj. Erick M. Detrich, 13th Expeditionary Sustainment Command, hands in his duffle bag inventory sheet as he loads his bag into a connex at Fort Hood, Texas, Jan. 13, 2020. The loading of tanks and other gear for transport to Europe, due to begin Jan. 23, marks the beginning of Defender-Europe 20, the largest exercise on the Continent for U.S. forces in 25 years. (Kelvin Ringold/U.S. Army)

STUTTGART, Germany – The largest exercise in Europe for U.S. forces in 25 years will kick off Thursday at motor pools in the U.S., where soldiers will begin loading tanks and other gear for transport to the Continent, the Army said.

About 20,000 pieces of military equipment must be deployed from the U.S. for Defender-Europe 20, which will involve large-scale combat drills and test the military’s ability to rapidly move large numbers of forces across the Atlantic Ocean.

Units from Fort Hood, Fort Bliss and Fort Stewart will load vehicles, heavy equipment and supplies for rail transport and onward shipping, the Army said in a statement Tuesday. Defender-Europe will include about 20,000 U.S.-based soldiers, 9,000 European-based U.S. troops, and 8,000 troops from 17 allied nations, the Army said.

Once in Europe, personnel will take part in drills focused on defending NATO territory, such as the so-called Suwalki Gap, a 40-mile stretch of borderland between Lithuania and Poland.

The Suwalki Gap abuts the Russian exclave of Kaliningrad to the west, where thousands of Russian troops, heavy artillery and anti-aircraft missiles are based. East of the strategic border area lies Belarus, a former Soviet republic that remains closely allied with Moscow, although ties have become strained of late between Russian President Vladimir Putin and longtime Belarusian leader Alexander Lukashenko.

During Defender-Europe, which runs through July, quick response forces from the 82nd Airborne Division will rehearse how to fight their way into a country by parachuting into the Republic of Georgia, a NATO partner country that fought a brief war with Russia in 2008.

But before fights on mock battlefields begin this spring, the Army’s logistical know-how will be tested on a scale not seen in Europe since the Cold War, when the Army routinely moved thousands of troops back and forth across the Atlantic Ocean for major exercises.

“It will be a dead sprint to move heavy equipment; deploy personnel; convoy wheeled vehicles; and get everyone enough food, water, and ammunition across several European countries,” Lt. Gen. Duane Gamble, the Army’s deputy chief of staff for logistics, said in a statement.

U.S. Army Europe has been building up for an exercise like Defender for five years, conducting numerous troop rotations to the Continent as a way of reinforcing the U.S. military presence, which has dwindled in the post-Cold War era.

Army logisticians are working to make sure convoys meet European road standards and have proper authorizations from national authorities in the final run-up to Defender. Military convoys have faced difficulties in recent years with European laws, which can differ from country to country, and diplomatic clearances required to move heavy vehicles across borders.

“When soldiers arrive in Europe, there will be no great logistics infrastructure that will greet them,” Gamble said. “Units must be able to do their job, at every echelon.”