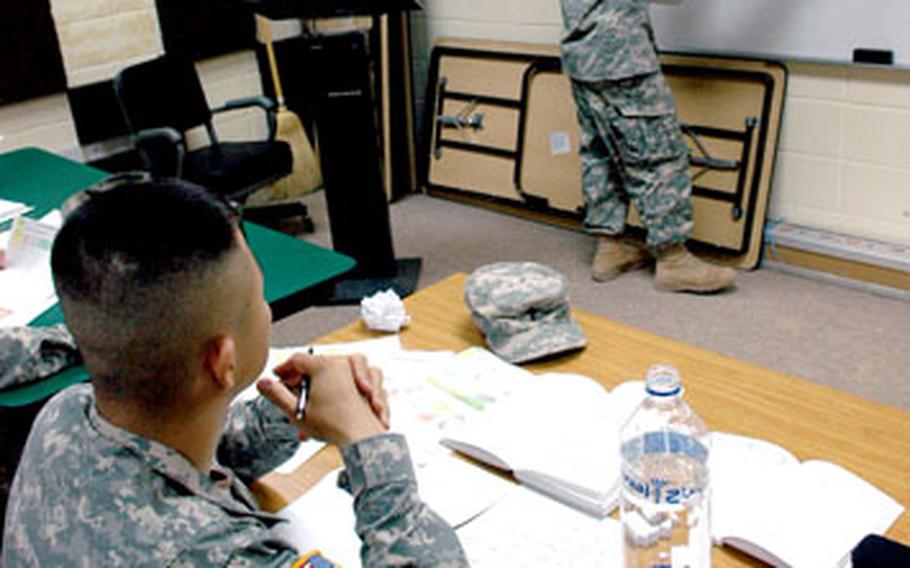 CAMP BUEHRING, Kuwait &#8212; Spc. Nathan Picchocki spent most of his time back in Germany like many lower-enlisted soldiers here, fixing Humvees, cleaning and shooting at the range. But since arriving in Kuwait about 10 weeks ago, Picchocki has started to do what the Army actually trained him to do: speak, read and write the Arabic language.

Picchocki is one of several specially trained Arabic linguists who run a casually organized and mostly volunteer beginners&#8217; class for soldiers who might deploy into Iraq later this year.

&#8220;This is awesome. This is the first time I&#8217;ve been able to use these language skills,&#8221; Picchocki, a 22-year-old from Grand Rapids, Mich., said after a one-hour class attended by five student/soldiers.

Picchocki and the other soldiers from the 1st Armored Division&#8217;s 2nd Brigade have plenty of time to study. The brigade initially spent months training and planning to go to Iraq, but their mission changed shortly after they arrived here. They are now staying at this desert training camp about 10 miles south of the Iraq border and remain ready to go into Iraq only in the case of a crisis.

The class here started after a chance conversation between Picchocki and a brigade chaplain, Capt. John Park, a native of South Korea who has an interest in foreign languages.

&#8220;My original hope was to save soldiers&#8217; lives,&#8221; said Park, who recalled hearing possibly apochryphal tales of soldiers who were killed after unknowingly driving past an Arabic-language sign warning of roadside bombs ahead.

Park and others from the chaplain corps attend the language classes because they want to set a good example for other soldiers.

Since arriving here in November, about 60 soldiers have opted to take the class, either through the twice-a-week instruction or the occasional weeklong, 35-hour intensive language class for those who have time and interest.

After learning about the class, commanders mandated that each battalion must send at least one person to take the language instruction.

Mostly, however, it is volunteers that show up twice a week at 8 p.m. with books and notepads, trying to learn how to read Arabic numbers, street signs and other basic knowledge that will make them better equipped to fight a counterinsurgency.

&#8220;There&#8217;s a shortage of translators up there,&#8221; said Capt. Thomas Hasara, an intelligence officer with the the 4th Battalion, 27th Field Artillery. &#8220;And even when you have one it always helps to know a little bit, so I can make sure what a guy is saying jibes with what the translator is telling me.&#8221;

The classes focus on giving soldiers skills needed to decipher the Arabic alphabet, an ancient phonetic system of curls and dots that reads from the right to the left.

&#8220;We teach them how to recognize letters, how to read a word and how to look it up in the dictionary. And from there, the soldiers can teach themselves,&#8221; said Spc. John Fugate, another linguist who helps teach the class.

After spending more than a year of intensive study to learn Arabic, Picchocki and the other linguists said they were particularly disappointed when their brigade learned it might not go to Iraq.

&#8220;Where else are you going to get complete exposure to a language except in a country where it is the mother tongue?&#8221; Picchocki said.