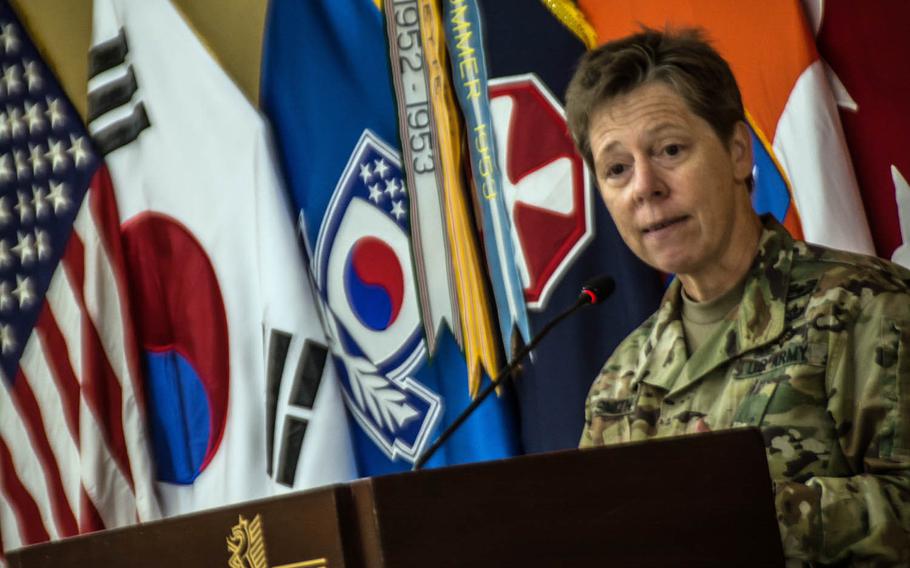 Maj. Gen. Tammy Smith, deputy general of the 8th Army, tells her story about being a gay soldier during an LGBT observance at Yongsan Garrison, South Korea, Thursday, June 15, 2017. (Marcus Fichtl/Stars and Stripes)

Maj. Gen. Tammy Smith, the 8th Army’s deputy commander for sustainment, spoke Thursday at the LGBT pride observance on the main Army base in Seoul — only the second time the event has been held in a reflection of the hard-won gains for gays in the military.

“To be ready to fight tonight, you know, we’ve got to be able to access the potential of our entire force,” Smith said in remarks in a ballroom at the Dragon Hill Lodge. “We are competing with corporate America for talent and we must demonstrate that we value talent regardless of the demographic that it comes from.”

In a milestone for gay rights, Smith became the first general officer to come out when she was promoted in 2012, less than a year after the controversial don’t ask, don’t tell law was repealed.

Her appearance took on added significance in South Korea, where the national military has recently been accused of targeting gays for arrest. Homosexuality is not illegal in the conservative country, but it is banned in the military and publicly frowned upon.

“I believe USFK is setting an example,” he said, but expressed concern the message isn’t being transmitted off post. “We definitely need to make sure the (South Korean) public knows that it’s very important to us and the alliance,” he said.

Smith outlined her personal journey that underscored the tremendous hurdles the LGBT community faced in the U.S. military as well. The Defense Department prohibited gays from joining the military in the early ‘80s, and Smith said the passage of don’t ask, don’t tell in 1993 actually seemed like progress to many.

“For the first 25 years of my career I not only didn’t have a full voice at the table, I could be fired for speaking at the table,” she said during the ceremony, which was hosted by the 1st Signal Brigade.

“We were willing, more than willing, to set aside who we were in order to live the life that this uniform represented and the values that it represented. We did this because we loved our country,” she added.

But the situation changed after she met her future wife, Tracey Hepner, and “it became harder and harder to serve,” she said, describing how the two women would have to pretend not to know each other in public.

She went so far as to seek retirement until she heard the then-Chairman of the Joint Chiefs of Staff Adm. Michael Mullen speak out against the don’t ask, don’t tell policy in 2010.

“For the first time in my life a senior leader serving said that my service was as valued as any other person … and in hearing those words he gave me hope,” she said.

Smith was serving in Afghanistan when the don’t ask, don’t tell law was repealed on Sept. 20, 2011. She remembers feeling like “the weight of the world had been lifted off my shoulders” but noticing it was otherwise just another day as soldiers went about their missions in the war zone.

The initial announcement about plans for Smith to speak at the LGBT ceremony drew several negative remarks that have since been deleted from Yongsan Garrison’s Facebook page.

Smith said she was disappointed by the reaction but also saw that as proof that she needs to continue to speak publicly.

“I know that we’re better than that,” she said after greeting soldiers, some with tears in their eyes as they thanked her for setting an example, following the event. “They need to know that there are role models throughout the ranks … that they can look up to.”

Smith also welcomed the fact that South Korea’s government had signed onto a U.S. decision to designate the country a post approved for same-sex couples.

“By making that change they have simply increased the readiness of USFK by allowing military families to remain together, all military families, regardless of orientation,” she told Stars and Stripes.

“There’s always the danger of there being negative role models and thankfully when there’s somebody like her willing to take the mantle, then we’re always guaranteed to have good leadership,” he said. “It’s a very different Army than when I showed up in 2008.”