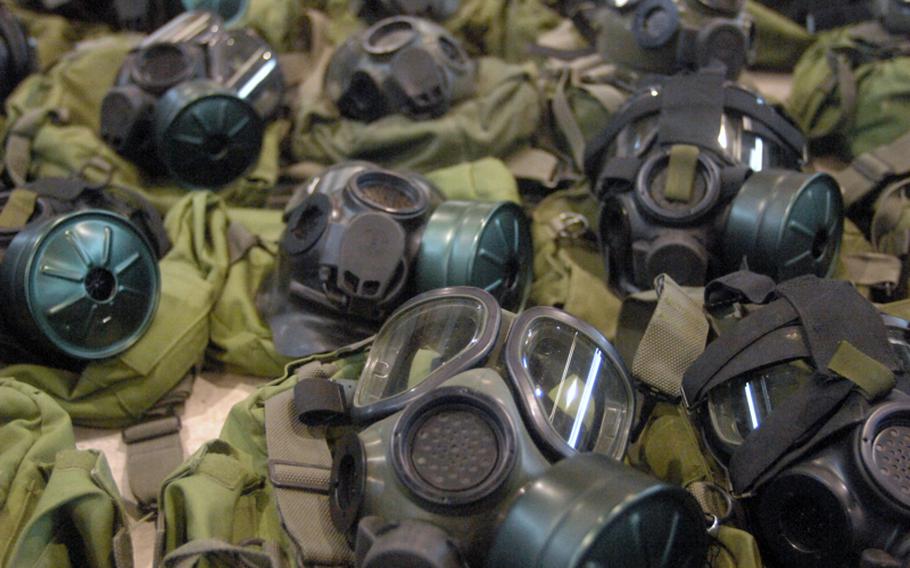 Buy Photo
Chemical masks are among the gear being turned in by soldiers with the 172nd Separate Infantry Brigade in Grafenwöhr, Germany, as the brigade approaches a scheduled inactivation next year. (Steven Beardsley/Stars and Stripes)

Buy Photo
Chemical masks are among the gear being turned in by soldiers with the 172nd Separate Infantry Brigade in Grafenwöhr, Germany, as the brigade approaches a scheduled inactivation next year. (Steven Beardsley/Stars and Stripes) 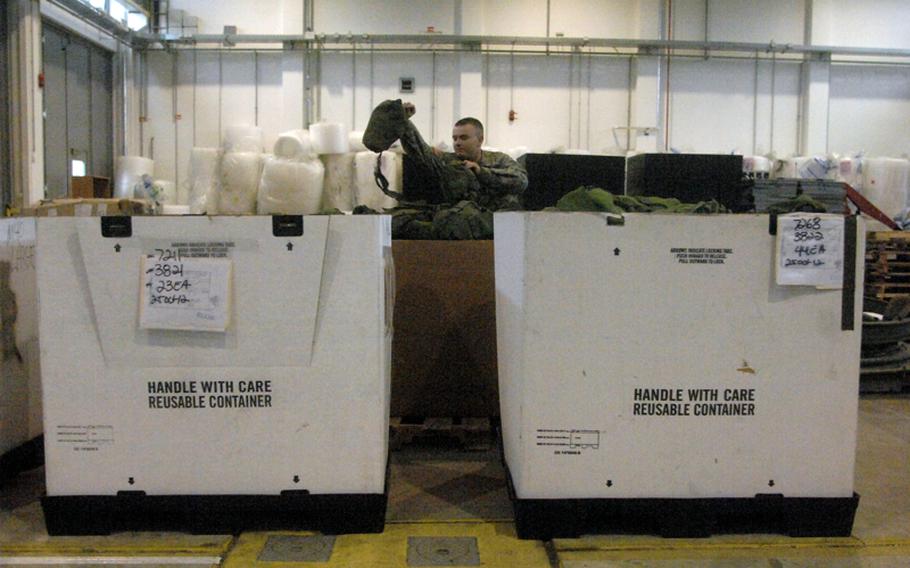 Buy Photo
A soldier in Grafenwöhr, Germany, sorts gear as part of Task Force Harvest, an effort by the 172nd Separate Infantry Brigade to round up 40,000 pieces of military equipment before the unit's inactivation next year. ( Steven Beardsley/Stars and Stripes) 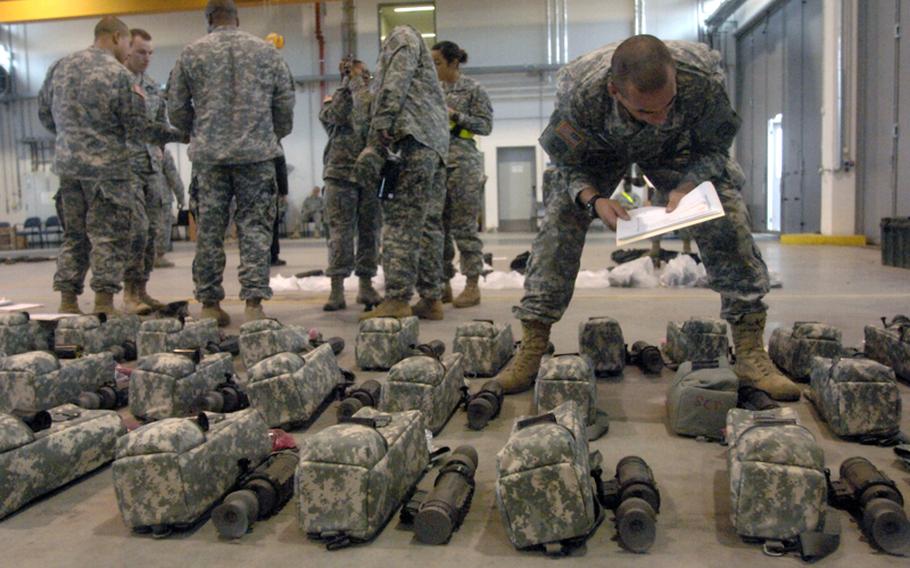 Buy Photo
A soldier checks equipment as part of Task Force Harvest, an effort by the 172nd Separate Infantry Brigade to round up 40,000 pieces of gear for return to the Army before the unit's scheduled inactivation next year. The brigade is based in Grafenwöhr, Germany. (Steven Beardsley/Stars and Stripes)

GRAFENW&Ouml;HR, Germany &mdash; Chemical masks, heavy gunsights, tripods &mdash; all laid out on the floor in rows before being checked, counted and packaged for shipping.

It&rsquo;s a snapshot of change in U.S. Army Europe, where the 172nd Separate Infantry Brigade recently started its inactivation in earnest on this rural German post. Company commanders and noncommissioned officers are clearing their property books of gear and watching more of their soldiers leave. Some have been there for a while.

The 172nd was in eastern Afghanistan in January when the Pentagon announced the unit would decommission upon return, part of a larger drawdown of U.S. Army forces in Europe. It was one of four Army combat brigades in Europe at the time, activated in Grafenw&ouml;hr in 2008 from parts of the 2nd Brigade, 1st Infantry Division.

Its planned October 2013 departure follows that of the 170th Infantry Brigade Combat Team from Baumholder earlier this year. The two brigades will take close to 8,000 soldiers with them, reducing the Army&rsquo;s footprint on the Continent to roughly 30,000.

For the 172nd, the drawdown mimics the reset phase of a typical return from deployment, when some gear is turned back into storage and many soldiers depart for another unit.

This time no new soldiers will replace those leaving, however. After turning in its heavy weapons following deployment, the brigade recently turned to the rest of its gear. In mid-October, it kicked off &ldquo;Task Force Harvest,&rdquo; an effort to turn in 40,000 pieces of gear in four months.

Bayonets and tents went early. Soldiers then rounded up biological-nuclear-chemical gear, as well as tripods for M240s and .50-caliber machine guns.

Depending on the need and condition, the gear will be shipped to another unit or to storage somewhere in Europe, according to Maj. Richard Reeves of the 21st Theater Sustainment Command.

For soldiers, the latest mission means wading through reams of paperwork detailing item condition. Some gear, such as the chemical masks, remained packaged through deployment.

&ldquo;It&rsquo;s always a surprise when you get back from deployment and you find something that&rsquo;s been in the package for a year,&rdquo; said Capt. Alain Alexandre, executive officer for Headquarters and Headquarters Company, 1st Battalion, 2nd Infantry Regiment.

The brigade will gradually close its units in the coming months. A final cadre will remain in Grafenw&ouml;hr before the brigade officially inactivates.

The 172nd should be down to half its size early next year, according to spokesman Sgt. Charles Crail, with many families leaving during the school break this winter. Soldiers with medical and legal issues are expected to be the last to go, he said.

The unit is still participating in area training, Crail said. Soldiers recently brought their downrange experience as observer-controllers to the massive Decisive Action Training Environment in Hohenfels, and they participated in recent training in Bulgaria.

While soldiers come and go in Army units, some have known little outside the 172nd over the past decade. Some NCOs had been with the unit even before it was reflagged in Grafenw&ouml;hr.

Carr, the first sergeant of Company A, 1-2, is one of them. Since landing in Schweinfurt with 1st ID in 2003, he&rsquo;s made four deployments with the unit, including the most recent one to Afghanistan. After the unit reflagged as the 172nd, he watched its legacy grow.

&ldquo;You become proud of the unit, the espirit de corps within the unit,&rdquo; he said.

The unit&rsquo;s inactivation turns real for Carr when he looks inside the battalion conference room, where he says the walls are decorated with carved wooden plaques marking the battalion&rsquo;s achievements. Carr knew the soldier who carefully carved each one, and he knows what each plaque represents.

&ldquo;There&rsquo;s still sentimentality there,&rdquo; he said. &ldquo;And we&rsquo;ve been with the unit since it was a blank wall to where it was today.&rdquo;