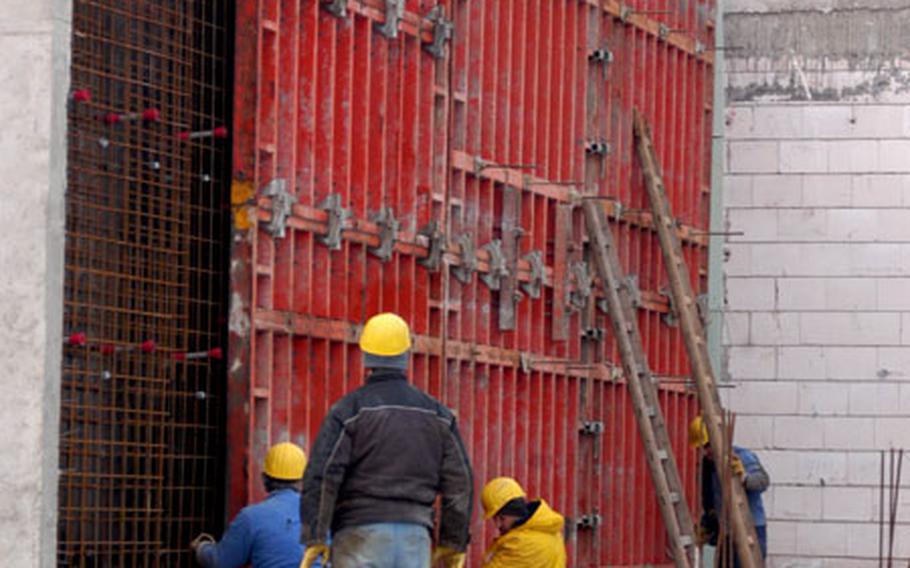 Builders at the Grafenwöhr, Germany, training area work Tuesday on a wall of what will become the base dining facility. The renovation is part of the expansive Effecient Basing Grafenwöhr project that will double the size of the installation over the next several years. (Ben Murray / S&S)

GRAFENW&#214;HR, Germany &#8212; While some military communities around Europe contemplate their fate after the announcement of a $430 million military construction proposal for Europe in 2006, Army officials at the Grafenw&#246;hr training area have a different concern.

As the home to the Army&#8217;s largest development project in Europe &#8212; a colossal $600 million to $700 million effort to transform an isolated training base into the region&#8217;s flagship installation &#8212; officials here wonder just how fast they can expand.

Around the base, cranes rise above half-finished buildings, workers toil around heaps of debris, and the din of construction competes with the sound of live artillery fire that is Grafenw&#246;hr&#8217;s trademark.

The work is part of what is called Efficient Basing Grafenw&#246;hr, or EBG, a 10-year project to enlarge the 1,200-soldier garrison into a brigade-size facility that base officials say will be home to the bulk of the Army&#8217;s presence in Europe.

Last month, while other installations in Germany waited for word on their take in the 2006 budget, the once-modest training outpost in northern Bavaria started this calendar year with plans to spend more than $190 million on construction projects, said EBG spokeswoman Susanne Bartsch. The plans dwarf other Army projects in Europe.

Last week, planners said the massive project is on schedule and on budget to hit its 2009 completion date, even though they no longer know exactly for whom they&#8217;re building the facility.

When conceived in 2000, Bartsch said, EBG was intended accommodate elements of the 1st Armored Division. Now, it looks like the heavy division is headed back to the States.

While it has been widely speculated that a light, mechanized Stryker Brigade will take the 1st AD&#8217;s place, Bartsch said official word on that decision isn&#8217;t expected until April or May.

EBG planners, however, said this week that it doesn&#8217;t really matter who eventually gets stationed at Grafenw&#246;hr because the rebuilt base has been designed to facilitate almost any brigade-sized force in the Army.

By the end of the project, the developed area abutting the 57,000-acre artillery range and training area will double in size as the population quadruples. About 50 new buildings including a post exchange/commissary mall, a 135-room hotel and a dining facility will be built, and 100 other buildings will be renovated, Bartsch said.

With 3,500 active-duty soldiers and 5,000 family members expected to start arriving as early as next year, the Army also is overseeing the construction of 1,600 family homes in surrounding German communities. Of those, 800 will be clustered in an area called Netzaberg, which will contain two new schools, a chapel, youth services buildings and a store.

The homes will be constructed in a build-to-lease program, in which the Army finds an investor to build the houses under the promise that it will rent them when they are finished &#8212; at a cost of $20 million a year when all 1,600 are done, Watsek said.

One of the biggest recent alterations to the EBG budget was a decision by the Army to spend $43 million to build the infrastructure of Netzaberg while it is still in talks with an investor for the project, Watzek said.

&#8220;There is a planned investor,&#8221; Watsek said, but a deal has not been signed on the project, prompting the Army to start the construction of the utilities.

The $43 million, Watsek said, is money that will be recouped when it signs a service deal with the eventual owner of the utilities, which will likely be the local German government.

The Grafenw&#246;hr government and other municipalities in the area have supported the expansion plan, EBG planners said, going so far as adopting new zoning and speeding up permit processes to aid the construction.