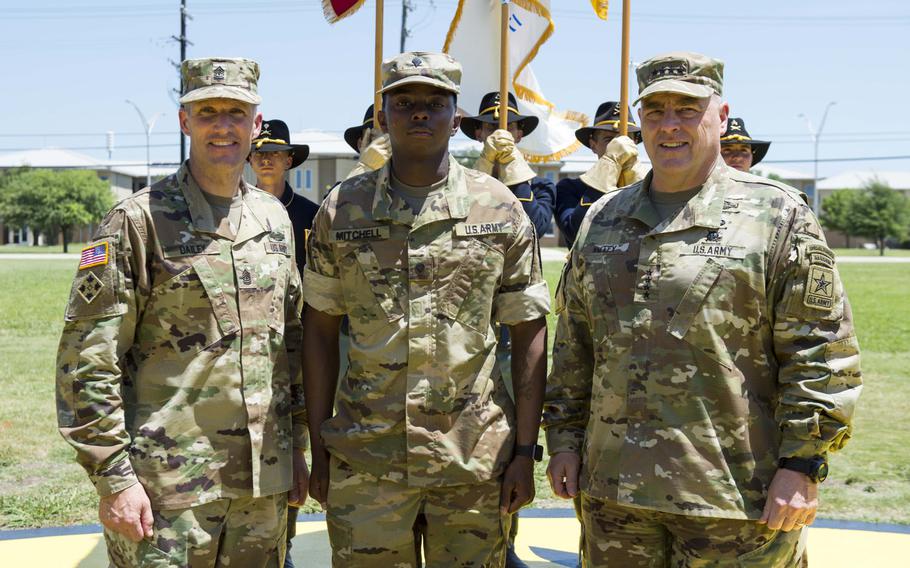 Spc. Cortne K. Mitchell wears the sleeves of his uniform shirt rolled up after Sgt. Maj. of the Army Daniel A. Dailey, left, and Chief of Staff of the Army Gen. Mark A. Milley, right, gave soldiers of the 1st Cavalry Division at Fort Hood, Texas, the go-ahead for a 10-day trial starting June 16, 2016. (Charles E. Burden/U.S. Army)

Soldiers at Fort Hood, Texas, have been allowed to roll up their uniform sleeves for a 10-day trial that ends on Sunday.

The decision came after a re-enlistment ceremony during which Army Spc. Cortne K. Mitchell asked Army Chief of Staff Gen. Mark A. Milley whether soldiers could roll up their sleeves to cool off in the Texas heat, the Army said in a statement.

The uniform exemption was only for the Operational Camouflage Pattern or Army Combat Uniform, while in garrison and with commander approval.

Lt. Col. Jerry Pionk, a spokesman with the Army personnel policy division, said the service would review feedback from the Fort Hood trial before deciding whether to change the policy.

“Feedback from soldiers resulted in us wanting to do a trial over the next 10 days to see the feasibility of updating Army Regulation 670-1 and incorporating in the future for the force to give commanders flexibility in wear based upon their unit’s mission,” Pionk said in a statement.

Opinion on the uniform change was mixed among 1st Cavalry Division soldiers interviewed by Stars and Stripes.

Younger members embraced the opportunity to show off their arms.

“It’s a good step towards a modern army,” said Pfc. Adrian Duczak, a rifleman. “And with the ‘suns out, guns out’ thought process, it’s going to not only boost morale but cause soldiers to take more pride in themselves and their appearance, thus helping our combat readiness. Because who wants to be the one with the smallest arms?”

“I personally, in one week, have seen sleeves rolled about eight different ways with varying appearances — none of which were neat and presented a professional appearance,” he said.

“Until the uniform changes and we remove the pockets and patches from the sleeves, I do not think that we should unilaterally start rolling sleeves.”

“Having been in the Army during the Battle Dress Uniform wear period, one of the many lessons learned was that the arms of soldiers were accessible to burns from the elements such as the sun,” he said. “These sunburns have already been seen from the soldiers wearing sleeves rolled up.”

“Honestly, things are changing in the Army, and it’s about time that we started working towards those changes,” he said. “Whether they be big or small, as the uniforms keep changing, so will the wear and appearance of the uniform along with it. Hopefully, we as an army can continue to keep our minds open for change. Sometimes change can be a good thing.”