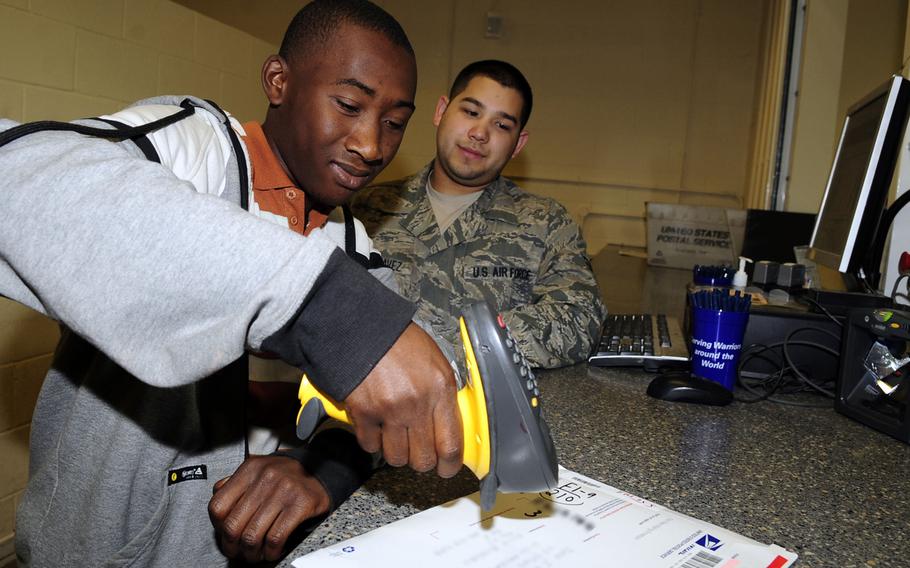 Jared Taylor, 16, scans a package under the guidance of Senior Airman Nolan Luna-Chavez at the RAF Mildenhall post office Aug. 3, 2012. Jared is part of the base's summer hire program, which allows students to work in clerical or labor positions around the base to assist military and civilian workers, earn money and gain workplace experience during their school break. (U.S. Air Force photo/Senior Airman ) (Ethan Morgan/U.S. Air Force)

The Civilian Human Resources Agency began accepting applications Monday for the Army Europe Youth Summer Hire Program, which was suspended last year because of the budget turmoil caused by sequestration.

The application window for all areas except Hohenfels, Germany, is open now through May 16. Hohenfels will accept applications from May 5 through June 13. Applications must be submitted online, and applicants must turn in completed in-processing packets to their Civilian Personnel Advisory Center.

Employment through the program runs from June 30 through Aug. 9 in all parts of Europe except Hohenfels, where it goes from July 13 through Aug. 23.

For additional information and to apply online, go to https://acpol2.army.mil/sh/staffing/summerhire/