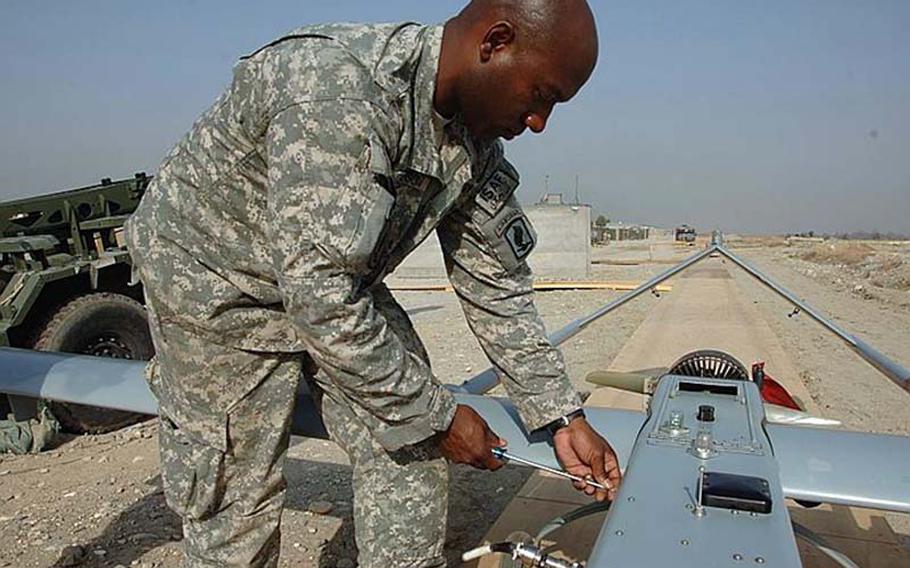 GRAFENW&Ouml;HR, Germany &mdash; The Army is planning to retool its combat aviation brigades by altering some of the units' combination of aircraft and by adding drones.

The aim is to convert all of the brigades to the &ldquo;medium&rdquo; combination of aircraft, which Kelly Pate, Army public affairs officer at Fort Rucker, Ala., said allows the commander &ldquo;maximum flexibility.&rdquo;

The &ldquo;heavy&rdquo; and &ldquo;light&rdquo; units will swap some aircraft to become more like the &ldquo;medium&rdquo; units. There are also plans to add an aviation brigade, bringing the total to 13, according to an Army aviation study released earlier this year.

Some of the reorganization already has taken place, according to Lt. Col. Brad Barker, rear detachment commander for the 12th Combat Aviation Brigade, a &ldquo;heavy&rdquo; unit based in Katterbach, Germany.

The 10th Mountain Division Combat Aviation Brigade at Fort Drum, N.Y., which was &ldquo;light,&rdquo; recently swapped helicopters with the 3rd Infantry Division Combat Aviation Brigade in Savannah, Ga., which was &ldquo;heavy,&rdquo; and both units now operate in the new &ldquo;medium&rdquo; structure, he said. No timeline has been set for when 12th CAB might reorganize, he said.

The Shadows, which have been in service in Iraq and Afghanistan since they were fielded in 2001, can hover over the battlefield for up to eight hours, according to Col. Robert Sova, Training and Doctrine Command&rsquo;s capability manager for Army UAS.

&ldquo;A Kiowa Warrior gets two or three hours of station time if he&rsquo;s close to a refueling point,&rdquo; Rizzi said. The Shadow is also quieter than the Kiowa and less likely to tip off the enemy that he&rsquo;s being spied on. He said there are no plans in the near future to convert reconnaissance squadrons entirely to unmanned flight.

&ldquo;Apaches going into the fight can have situational awareness before they get there,&rdquo; he said.

Barker said pilots serving with 2nd Battalion, 159th Aviation Regiment in Iraq can already see video transmitted by the pilotless planes, control cameras on the drones and even fly them.