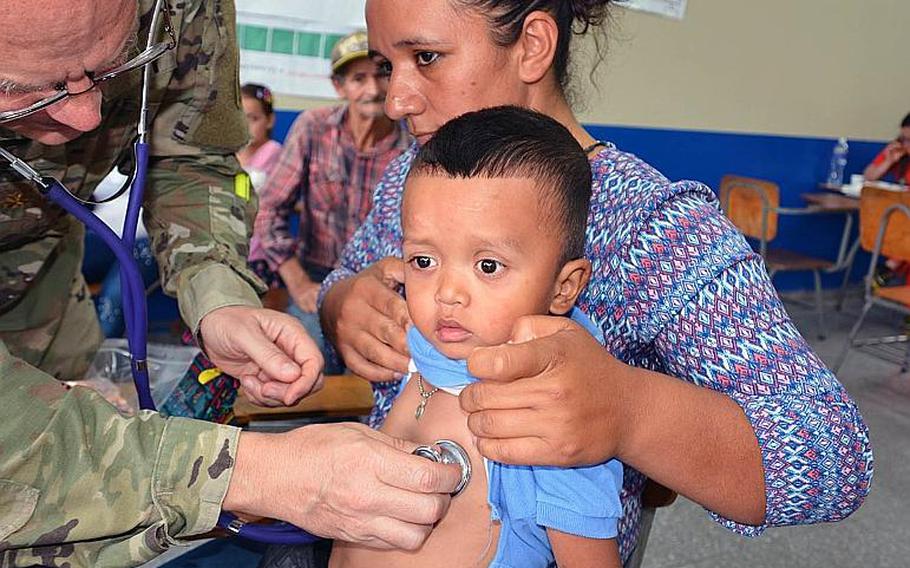 Perhaps the most poignant lesson has been to “graciously mitigate expectations” from the local patients she sees, said Billstrom, a physician’s assistant, during a recent medical training mission in this remote town in western Honduras.

She recalled the case of a woman in her early 60s walking several hours across mountain terrain to attend a clinic the team had staffed. Honduran doctors had told her there was no cure for her advanced-stage cancer, which had metastasized to her liver, lungs and bones.

She brought her medical records and images, showed them to Billstrom and pleaded for an American medicine or procedure that could save her life — but the medical team could offer her nothing more for her terminal cancer.

Billstrom said she would remember forever what the woman said: “Well, if the Americans can’t help me, then I’ll accept that I’m going to die.”

For more than a quarter-century, American military medical personnel with Joint Task Force-Bravo have journeyed to the most isolated places in Central America to train under austere conditions while providing much-needed primary care to locals.

Their presence draws crowds and, as Billstrom and her fellow soldiers have learned, raises hope in people with little access to medical care.

Based at Soto Cano Air Base in central Honduras, the joint task force has been sending teams from its medical element since 1993, treating more than 450,000 medical patients and 86,000 dental patients.

Convoy over mountainsIn early March, about two dozen personnel with the element convoyed from the base in six vehicles to conduct a medical readiness training exercise, or MEDRETE, in La Encarnacion, a town of about 3,000 near the borders of Guatemala and El Salvador.

The 200-mile drive from Soto Cano Air Base to the town takes a full day, given the steep grades, winding roads and slow-moving trucks burdened with sacks of coffee beans and building supplies. The last 90 minutes of the drive is on a narrow, crushed-rock road that wends through creek beds and soaring mountain vistas.

A separate, much smaller surgical team traveled to a nearby regional hospital to perform operations.

The principal assignment for the medical personnel is to provide health care for the Americans stationed at Soto Cano, said Capt. Alejandro Castillo, who plans medical missions with partner nations in the region. “But since we’re pretty much healthy, we do these missions where we go out into the communities,” he said.

It takes several months of preparation to conduct a single exercise, which lasts almost a week and is done throughout the region.

“With this particular community, we met with the Ministry of Health, and we looked at the needs of that community and how with the soldiers we have here we can go and practice skills, but at the same time provide medical care to the community,” he said.

A cadre of Honduran medical personnel joined them for the March training exercises.

Packed full of patientsThe grade school hosting the medical clinic was a flurry of activity as the medical team arrived the first day, with patients lining up by the dozens. Children scampered around in their school uniforms while their teachers pitched in to help where needed in classrooms devoted to public health, triage, primary care, lab testing, dental and pharmacy.

More than 500 patients showed up for the two-day clinic in the town.

“I feel anxious and I just want to run away,” he said, pointing to his heart. “I’m pretty hopeless, just waiting for my time to end.” He looked at his wife, Rosa. “She’s my partner and she’s always with me.”

Wilson prescribed a medication to reduce blood pressure, which he said also reduce should help his anxiety.

“As a primary care physician, it is difficult for me to not be following up with the same patients time after time,” Wilson said later. “At home, I have patients I’ve been seeing for 10 years.

“On the other hand, they might not have anything if we were not here.”

Other patients complained of headaches, fevers, stomach problems, joint and muscle pains and other chronic problems. The clinic pharmacy provided over-the-counter and basic prescription drugs for many cases but only a 30-day supply in most cases.

Billstrom described the clinics as “doing a lot with just a little bit of medical supplies and medications.”

“It really enhances our overall medical readiness down the line in our military careers — or even for our next mission beyond Honduras — to be able to treat people far forward with just a few things,” she said. “It increases our inventiveness, our ingenuity, our capability. It makes us a more capable force.”

For example, in the absence of a formulation to treat an ear infection, she learned from the pharmacist that a formulation for treating an eye infection could be used as alternative, she said.

“But you can’t use an ear formulation in the eye,” she said.

“In the United States, we’re so quick to order a CT scan,” she said. “That’s not an option here. You really have to become an astute clinician and really use your bedside history-taking skills and physical exam skills, which I think would definitely help downrange from a military aspect.”

To pull or not to pullTreatment for patients the dental clinic was more straightforward.

“What we do on these MEDRETEs is basically extractions,” said Maj. Margaret Novicio, an Army Reserve dentist. “We try to be conservative. If we feel they can restore the teeth, such as doing fillings or doing a root canal and crown, we encourage them to save their teeth instead of extracting them.”

The medical team is not equipped to provide such treatments, however, and most patients don’t have access or money for such dental work.

“A lot of them are set on getting the tooth extracted,” she said. “But if they can get another year or two out of it, we encourage them to keep them. The ones we are extracting are beyond repair.”

Some patients have three teeth removed at one sitting, she said.

“On our last MEDRETE, we were taking out permanent teeth on 8-, 9-year-olds,” she said. “It’s heartbreaking, and we don’t want to do that. But if it’s going to be abscessed in the future, we have no choice.”

“Gallbladder pathology here in Honduras is very high,” said Carlos Duron, a Honduran medical officer who has worked with the task force’s medical element for two decades. “It’s genetically driven and also has to do with diet, which here is based on a lot of starch and fried foods. We like our fried plantains and refried beans. So that favors a gallbladder to produce more concentrated bile that in the end becomes a gallstone, or several gallstones.”

Hernias come from hard labor in the mountainside fields, he said.

Duron spoke in the operating room as Army Reserve Col. Peter Mazolewski finished suturing a woman after removing her gallbladder, which had plagued her for four years.

“This is about the 30th one I’ve done,” Mazolewski said of his 90-day deployment to Honduras, which was soon over. “All female.”

“This is an important place to train and do surgery,” he said after completing the first surgery of the day.

Most gallbladder surgeries in the U.S. are done by making several tiny incisions for the use of a laparoscope, so many young surgeons have not done the open-incision surgeries still common in Central American hospitals, he said.

“For us, if we were ever in a combat environment, there’s no laparoscopy,” he said. “It’s all open, so that’s why in this resource-restrained environment, it’s pretty important for the American surgeon to get this type of training and, hopefully, also help out.”