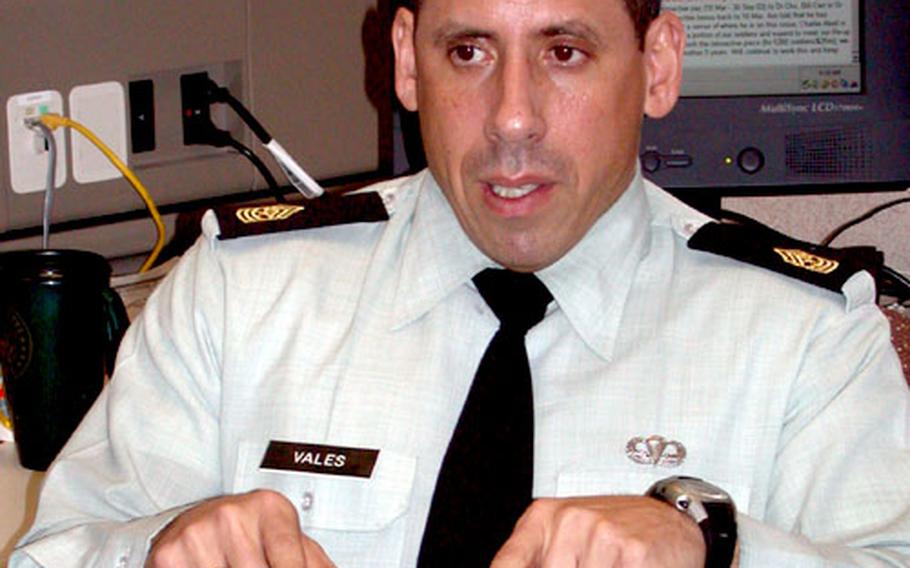 ARLINGTON, Va. &#8212; Effective immediately, active-duty soldiers who re-enlist while deployed to Kuwait, Iraq or Afghanistan will receive a tax-free, lump-sum bonus, which for most will exceed $5,000, Army officials said Thursday.

The bonus is the much-anticipated reinstatement of a flat rate, $5,000 sign-up stipend that was in effect for just two weeks in late September.

The bonus expired Sept. 30, when the Army&#8217;s fiscal 2003 funds ran out for the program. Since then, Army officials have been working to secure funds to continue the bonus, which was a highly effective re-enlistment tool.

&#8220;Everybody and his brother was saying, this is something we need to do for our soldiers,&#8221; Lt. Col. Franklin Childress, an Army personnel spokesman, said in a Thursday interview.

The bonus, which applies only to active-duty soldiers, not reservists, is retroactive to the date when the old bonus expired, Army Sgt. Major James A. Vales, the service&#8217;s senior sergeant major for retention, said in a Thursday interview in his Pentagon office.

The new bonus &#8212; including the retroactive money &#8212; is slightly different from the old version, however.

Most significantly, the new version does not apply to soldiers in Korea, while the two-week bonus did.

Congressional legislators decided not to include Korea in the list of eligible deployment areas when approving the legal language for the new bonus, which was part of the 2004 defense supplemental request, Vales said.

He said he did not know why Korea was left out, but added that Army leaders are now working on a new series of military occupational specialty-specific bonuses especially for soldiers in Korea. That program is not finalized, Vales said.

The new bonus is also not a flat payment of $5,000, as it was in September. Instead, it is calculated using a soldier&#8217;s base pay, years of service, and length of the re-enlistment, which must be at least three years.

The new formula means that some soldiers will get very slightly less than $5,000 under the new formula, but often will get more &#8212; sometimes considerably more.

Moreover, on Jan. 1, all servicemembers will receive their annual raise, so many soldiers will probably decide to wait until that date to re-enlist in order to have their bonus calculated using the higher base salary, Vales said.

The 2004 bonus, which is officially known as the Targeted Selective Re-enlistment Bonus Program, will &#8220;probably cost close to $100 million, when you include the retroactive piece,&#8221; Vales said.

Army officials knew they had a powerful retention tool in hand when they saw how popular the September bonus was with soldiers, Vale said.

Army personnel officers reported a total of 773 soldiers in Iraq, Kuwait and Afghanistan, and 182 soldiers in Korea, who specifically identified the signing bonus as the reason behind their enlistment in those two weeks, he said.

After the September bonus expired, rumors that the Army would reinstate the signing bonus for deployed soldiers were so strong that thousands of soldiers have decided to &#8220;take a wait and see attitude&#8221; before re-enlisting, Vales said.

Army officials believe those fence-sitters are the reason the Army is about 12 percent behind on its first-quarter 2004 re-enlistment target, or about 2,000 fewer soldiers than the Army hoped to re-up between Oct. 1 and Dec. 31.