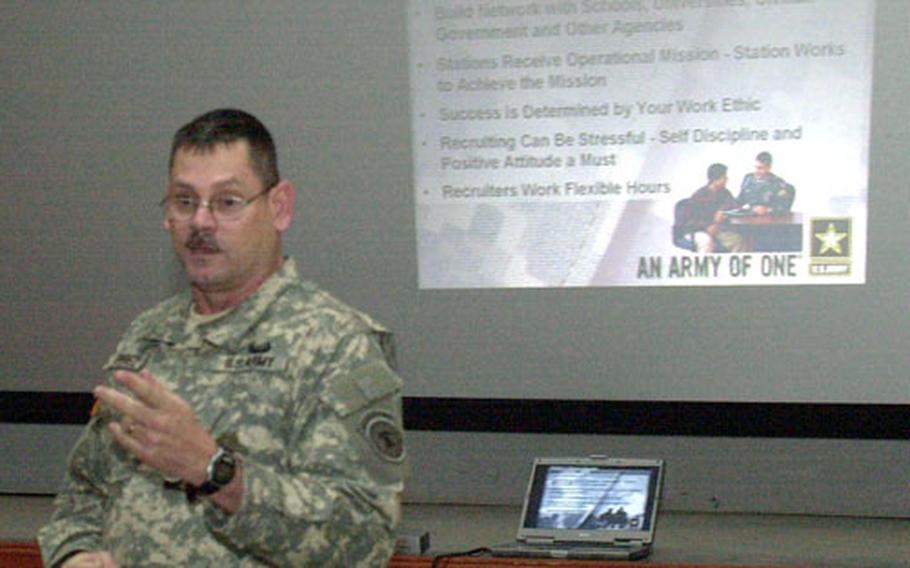 Sgt. 1st Class Neftali Perez talks to soldiers interested in being recruiters at Camp Hovey on Thursday as part of a weeklong trip to bases in South Korea. (Erik Slavin / S&S)

CAMP HOVEY, South Korea &#8212; Multiple deployments have made Army recruiting more difficult than before the war on terror but they may be making finding new volunteer recruiters easier.

It may be the biggest reason why many soldiers who have served multiple tours in Iraq and Afghanistan are considering switching to recruiting, Perez said.

Stability aside, soldiers at Camp Hovey on Thursday indicated they were well aware of the numbers and media scrutiny paid to Army recruiting since the wars began.

Army recruiting numbers fell well short of goals in fiscal 2005, although they have shown signs of rebounding in 2006. The Army also mandated a recruiter standdown day in 2005 after news reports exposed unethical tactics among some recruiters.

The Army combats those perceptions with fast promotions and financial gain for almost every good recruiter, Perez said.

Recruiters receive $450 per month in nontaxable special-duty pay. They also get perks such as free dress and utility uniforms, a government vehicle and a small expense account.

The incentives make up for what Perez admits can be a stressful job.

Soldiers used to a world full of regimentation and order-taking may find their new environment shocking.

&#8220;You are not in charge of anybody but yourself, which is a good thing,&#8221; Perez said, adding that recruiters work a lot of late hours. The job gets busiest when the high school day ends and may not wind down until 9 p.m.

Top recruiters always have a business card handy, even on a weekend grocery run or a trip to the mall, Perez said.

New recruiters who have been deployed also will be able to tell their own stories and work better with concerned parents, he said.

Sgt. Louis Davis, who attended Thursday&#8217;s briefing, said he believes the wars would not deter most future soldiers. &#8220;Not as long as you tell them the truth,&#8221; Davis said.

Sgt. Juan Aguado said he often talks about deployments with teenagers while on vacation in East Los Angeles.

He tells them that yes, they may have to kill the enemy. He says that it is a job done without hatred and something done for a far better cause than what many teens are involved in right now on the streets.

Recruiting, by the numbers