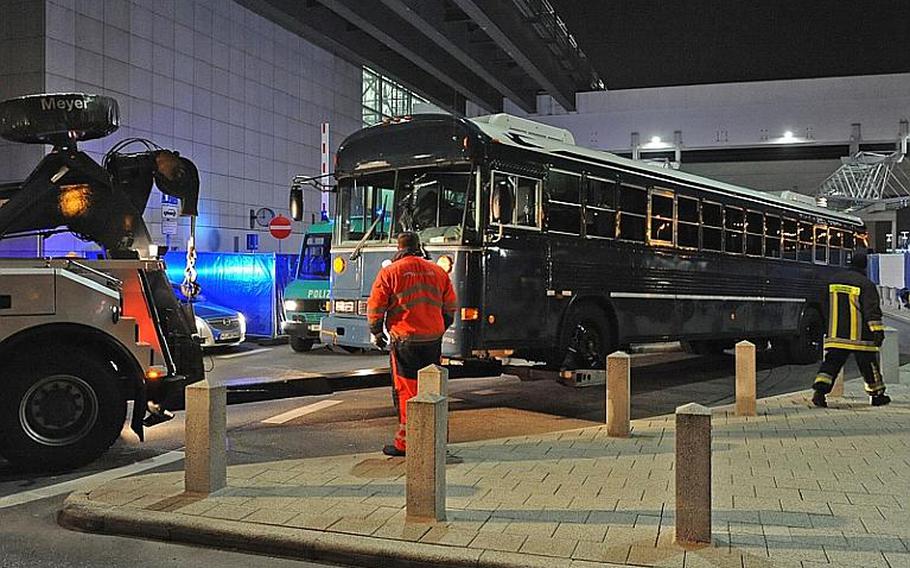 Buy Photo
A blue U.S.Air Force bus is towed from Frankfurt airport's Terminal 2 after a shooting that killed two airmen on March 2. (Michael Abrams/Stars and Stripes)

The Army is recommending a range of measures that attempt to address security shortfalls after the slaying of two U.S. airmen on a military bus at the Frankfurt international airport earlier this month.

In a March 11 message to commands worldwide, a copy of which was obtained by Stars and Stripes, the Army lays out a variety of near- and long-term &ldquo;force protection planning considerations.&rdquo;

Arid Uka, an airport worker, is alleged to have boarded a U.S. military bus at Frankfurt airport&rsquo;s Terminal 2 on March 2 and opened fire on a group of airmen, most of whom were en route to Afghanistan. He is being held by German federal authorities while an investigation continues. Under German law, no charges are filed until the investigation is concluded.

Senior Airman Nicholas Alden, 25, assigned to the 48th Security Forces Squadron at RAF Lakenheath, England, and Airman 1st Class Zachary Cuddeback, 21, the bus driver who was assigned to the 86th Vehicle Readiness Squadron at Germany&rsquo;s Ramstein Air Base, were both killed.

Two other airmen were wounded before Uka&rsquo;s pistol jammed and he was apprehended by authorities.

After the incident, the military&rsquo;s use of such conspicuous buses to transport troops between commercial airports and military bases was widely criticized.

The day after the shooting, Lt. Gen. Stephen P. Mueller, USAFE vice commander, said that issue will be part of an investigation into the incident.

&ldquo;Those kind of details, we won&rsquo;t have answers to until we investigate,&rdquo; he said.

Among the Army&rsquo;s recommendations are to &ldquo;sanitize shuttle buses in order to make them less obvious in an attempt to &lsquo;blend in&rsquo; &rdquo; with local transportation, including changing the buses&rsquo; color and removing U.S. government markings and registration plates.

In the long term, the Army recommends purchasing local buses for transportation of soldiers, &ldquo;as these vehicles will blend into the local environment more readily and reduce potential risk.&rdquo;

U.S. Air Forces in Europe and U.S. Army Europe officials this week refused to discuss whether the commands will be changing bus policies.

The Army also recommends that commands:

review threat assessments for public transport and airports, including varying of bus routes.develop plans with host nations to use more secure routes to get large groups of troops to places such as airport terminals.re-evaluate policies for the wearing of uniforms off-base, and conduct risk assessments for large gatherings on and off base.Robert Oatman, a Navy veteran and head of the executive protection firm R.L. Oatman & Associates in Maryland, reviewed the recommendations and said the Army&rsquo;s response to the shooting is &ldquo;very proactive.&rdquo;

While some of the measures in the document have been around for some time, they need to be reviewed on a regular basis, Oatman said.

&ldquo;We have a tendency to get lax because nothing&rsquo;s happening,&rdquo; he said. &ldquo;To me, that&rsquo;s not good protocol.&rdquo;

While Oatman characterized the Army&rsquo;s overall approach as solid, it remains to be seen how the various commands will implement these proposals.

Oatman said that, as a security consultant, he is always more worried about the actions of the lone gunman than a large-scale terrorist attack.

&ldquo;[Attackers] choose their time and the method,&rdquo; he said. &ldquo;Why make it easy? We leave the back door open and we allow these individuals to take advantage of it.&rdquo;

Oatman said he is also concerned about the potential of a copycat attack, which makes revising procedures quickly and consistently important.

&ldquo;Will this make a difference? Yes, I hope it does,&rdquo; he said of the Army&rsquo;s guidance. &ldquo;This all has to be revisited and reinforced. But people forget about this stuff until something happens.&rdquo;

CorrectionThis story should have said that Arid Uka, a radicalized Muslim, allegedly stepped onto a U.S. military bus at Frankfurt airport&rsquo;s Terminal 2 on the afternoon of March 2 and opened fire on a group of England-based airmen who were en route to Afghanistan.