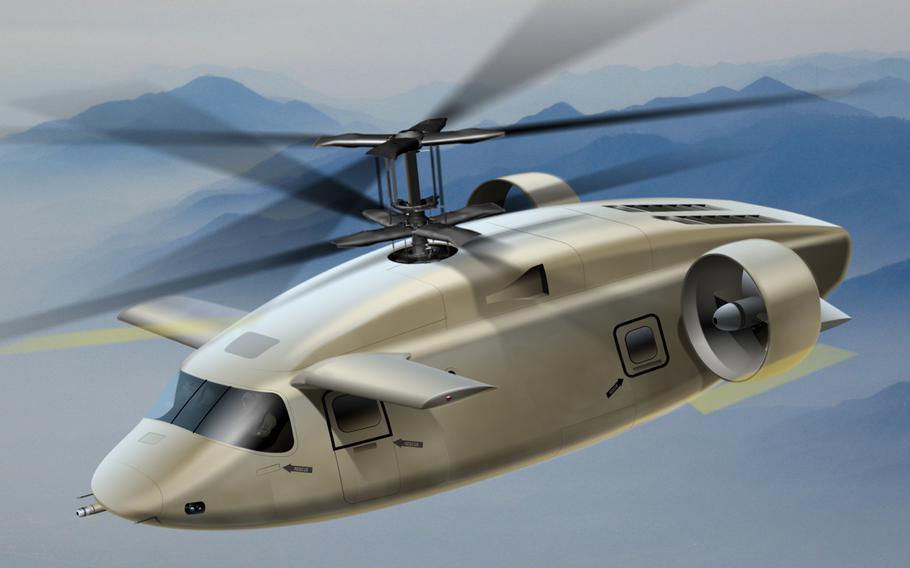 The AVX design for the future lift helicopter would feature coaxial rotors and ducted tail fans attached to a sleek fuselage. The aircraft could carry 14 troops at 230 knots and could fly from the West Coast to Hawaii with extra fuel tanks, according to AVX officials. (Courtesy of AVX)

The AVX design for the future lift helicopter would feature coaxial rotors and ducted tail fans attached to a sleek fuselage. The aircraft could carry 14 troops at 230 knots and could fly from the West Coast to Hawaii with extra fuel tanks, according to AVX officials. (Courtesy of AVX) 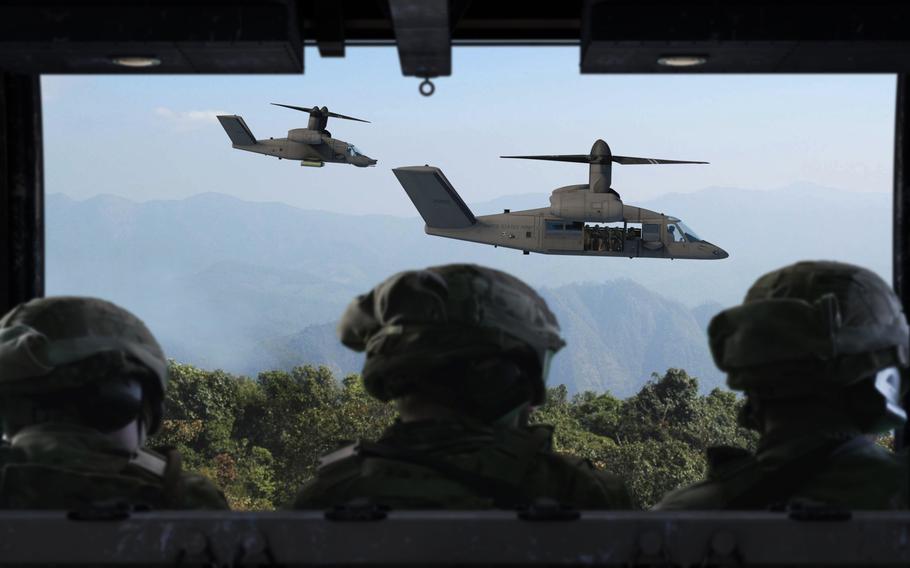 The Bell V280 Valor - which looks like a mini-version of the Osprey - is designed to be flown by pilot but could be produced as an unmanned vehicle. It will be able to cruise at 280 knots with a range of 500 to 800 nautical miles. (Courtesy of Bell Helicopter)

Tilt-rotor aircraft that look like mini-Ospreys are vying with other new designs to replace thousands of U.S. military helicopters.

Tilt rotors are incorporated in two of four vertical-lift designs awarded funding by the Department of Defense last month. The Joint Multi-Role Technology Demonstrator funding is part of efforts to build a family of vertical-lift vehicles that could replace thousands of aircraft over the next 50 years, according to the Army.

Today’s fleet of U.S. military helicopters has flown extensively in Iraq and Afghanistan in the past decade, and many may need to be replaced before long, although officials are also looking at extending aircrafts’ lifespans.

The goals of the Future Vertical Lift initiative are to provide the warfighter with improved speed, range, reliability and survivability, the Army’s Aviation and Missile Research Development and Engineering Center said in a statement announcing the design funding.

“The Army has taken a large step toward developing a new family of aircraft referred to as the Future Vertical Lift Family of Systems,” AMRDEC officials said.

Over the next nine months, teams from Bell Helicopter, Karem Aircraft Inc., a Sikorsky-Boeing team and AVX Aircraft Co. will refine their designs and prepare for flight tests in 2017.

Tilt rotors like those employed by the Osprey are incorporated in the Bell and Karem designs. They are competing with aircraft that feature coaxial rotors — which spin in opposite directions — and pusher propellers.

The tilt-rotor aircraft appear to be faster and have a longer range than other designs, but proponents of the coaxial helicopters claim they will be cheaper to build and operate. The Marine Corps, which has flown the tilt-rotor Osprey on numerous combat missions in Iraq and Afghanistan, has praised its performance, and Japan and Israel have expressed interest in buying some.

However, several fatal crashes and an inspector general report that raises concerns about the way in which Osprey units have recorded readiness information mean there’s still a cloud hanging over the aircraft.

One possible alternative is Sikorsky-Boeing’s SB-1 Defiant helicopter, which can fly up to 250 knots using a pusher propeller, according to a Sikorsky statement. A UH-60 Black Hawk cruises at 150 knots and has a range of just more than 300 nautical miles.

Patrick Donnelly, of Boeing Defense Systems, said by email that the design has a rigid rotor coaxial configuration.

“We believe the configuration better meets the stated needs of the Army as it has the low speed maneuverability of a helicopter while providing a high cruise speed,” he said.

The AVX design for the future lift helicopter would also feature coaxial rotors and ducted tail fans attached to a sleek fuselage. The aircraft could carry 14 troops at 230 knots and could fly from the West Coast to Hawaii with extra fuel tanks, Cox said.

“Our design will provide the Army with the performance that they have put out in their request at a lower cost than a tilt rotor — in terms of both acquisition and operations,” he said.

“Ours is a simple design that produces the performance they want at a lower cost than competitors,” he said.

In contrast, the aircraft that Bell hopes to build — the V280 Valor — leverages advances made in the Ospreys, which have flown more than 200,000 hours, according to Chris Gehler, business development manager for the aircraft.

“We’ve been able to develop a brand-new aircraft with all the goodness of that design, but we’ve also reduced weight and complexity,” he said. “You get the performance characteristics that you have in the Osprey but in a smaller package.”

The Valor, which looks like a small Osprey, is designed to be flown by pilot but could be produced as an unmanned vehicle. It will be able to cruise at 280 knots with a range of 500 to 800 nautical miles.

It’s designed to be cheaper to fly over its lifespan than today’s helicopters, taking into account the cost of maintenance and fuel and other savings that could be achieved due to its improved performance, Gehler said.

He said the Valor could move troops and equipment around the battlefield faster than conventional helicopters.

“If you have a range of 800 to 2,100 nautical miles, you can reduce or eliminate FARPs (forward arming and refueling points) in certain areas,” he said. “It changes the way a ground commander looks at his battlefield and how many other assets he has to put out there.”

A civilian version of the aircraft might be available one day, but the focus now is on a military version, he said.

In the Pacific theater, where the U.S. military plans to focus its efforts in years to come, the extra range of new vertical-lift aircraft will be important.

“The distances in the Pacific are huge,” Gehler said. “A platform like this is something that commanders can use to operate throughout the region.”

For example, the Valor would be able to fly from Okinawa or even the U.S. to the Philippines. Conventional helicopters would normally be transported there inside a C-17 transport plane or shipped on a container vessel, Gehler said.

“DOD wants to have a leap-ahead technology,” he said. “The idea is to provide warfighters with a capability that is transformational.”

Karem did not immediately respond to an interview request, but the company has posted images and technical data on its website about heavy-lift, tilt-rotor aircraft that could carry armored vehicles at an altitude of 45,000 feet and a speed of 330 knots.

“Karem Aircraft is actively developing its Optimum Speed Tilt-Rotor and other technologies for transport applications,” the website states.

Former Army officer David Johnson, who works at the Center for Advanced Defense Studies, said officials need to look at the impact of new aircraft on things such as doctrine, personnel, training and facilities.

“Small changes can have huge secondary and tertiary ripples,” he said.

For example, officials should assess whether new vertical-lift aircraft could transport items of the same size, either as internal or external loads, as the helicopters they will replace, he said.

Late next year, two of the four designs will be selected for funding to build and test prototypes, he said.