Army pulls the plug on electric vehicles in Europe 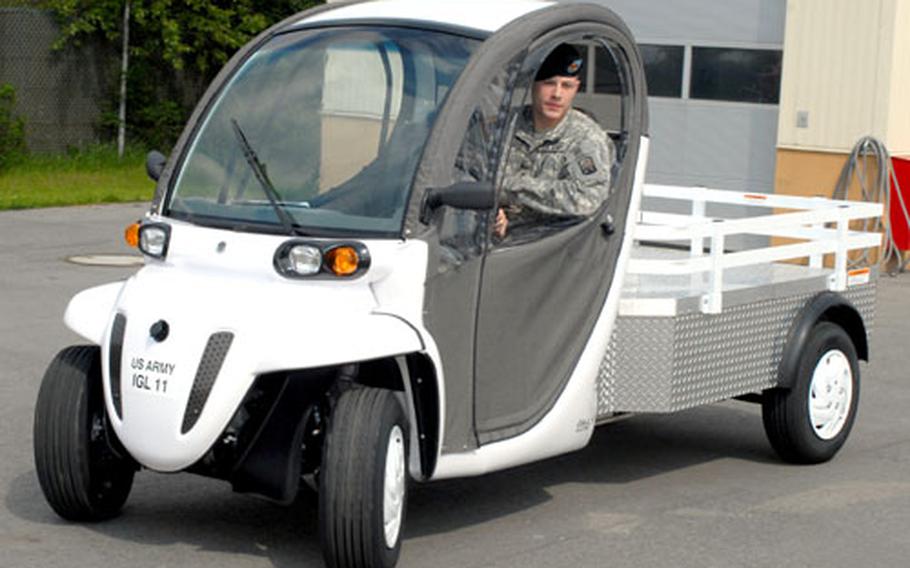 Spc. Jacob Landis drives a leased electric vehicle at Grafenwöhr, Germany, in May. After a six-month trial, the garrison has decided not to keep the three vehicles. (Seth Robson / S&S)

GRAFENW&#214;HR, Germany &#8212; The Army will not use electric vehicles in Europe in the near future after a six-month trial failed to impress officials.

U.S. Army Garrison Grafenw&#246;hr tested three Global Electric Motorcars, or GEMs, from April to October as part of a study to determine how feasible it was to replace certain gasoline- or diesel-powered vehicles in its fleet.

The cars were leased &#8212; at a cost of $13,000 for the three cars &#8212; to compare their performance to that of conventional cars and trucks used by the Army in Bavaria. At the start of the trial, garrison spokesman Franz Zeilmann said the vehicles could be adopted by garrisons across Europe.

"They broke down too often and didn&#8217;t have enough range," he said of the cars made in the States by a Chrysler subsidiary.

According to the GEM Web site the cars recharge in six to eight hours from a standard electrical outlet and have a range of about 30 miles.

"GEM battery-electric vehicles are classified as low-speed vehicles, or neighborhood electric vehicles, and are street legal in nearly all 50 states on public roads posted at 35 mph or less. With a top speed of 25 mph, GEM cars have a range of up to 30 miles on a charge and are great for traveling around neighborhoods, city centers or job sites," the site states.

During the trial, soldiers used one of the electric cars, which featured a pick-up truck-style flatbed, for on-post inspections of trash sites. Another car was used for mail runs on base, while the last was used for housing area checks.

Hays said there are no plans to bring the GEM cars back, but that electric cars might be tried again in the future.

"I think the potential is there once the batteries get better and we have longer ranges," he said.

The drastic drop in the price of gasoline, from a U.S. average of more than $4 per gallon in the summer to about $1.65 today, did not affect the decision to drop the electric vehicles, Hays said.

"The price of energy affects individuals more than us since our fuel comes through the Defense Energy Support Center," he said.

The rejection of the cars does not signal that the Army is less interested in energy efficiency, Hays added.

"We are still going to pursue those kinds of program," he said.

"We are working on projects for photo voltaic cells on the roofs of some buildings that will give us some electrical savings."

"If we can save only one percent, that is almost $300,000. Just turning switches off a little more often can help," he said.

The rapid growth of Grafenw&#246;hr, which is adding numerous energy intensive facilities such as new motor pools, means energy costs will increase, he said.