Army probing death of investigator at Fort Hood, 1 of 6 deaths at the base this year 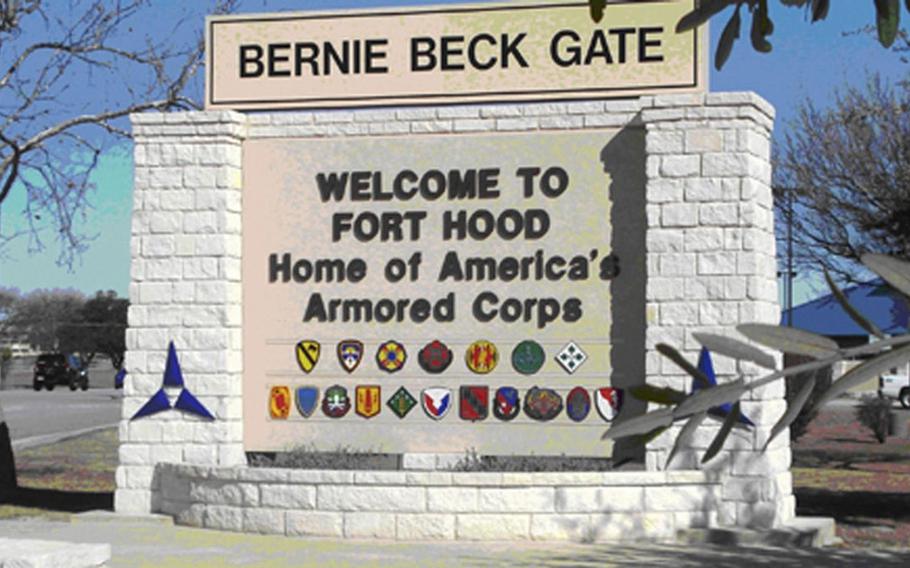 The entrance to Fort Hood is shown in this 2014 file photo. (Tribune News Service)

AUSTIN, Texas — Army investigators launched a probe into the death of one of its agents at Fort Hood, a spokesman said Thursday, yet another death at the sprawling Texas base.

Staff Sgt. Steven K. Hines, 29, who was assigned to the 11th Military Police Battalion, was found dead Sunday night on post, about 50 yards behind the unit’s headquarters building, an Army news release stated.

Foul play is not suspected in Hines’ death, but it has not been ruled out at this time, the release stated. The cause of death has not yet been announced.

Hines’ death is at least the twelfth casualty of soldiers assigned to Fort Hood since November, according to a Stars and Stripes review of news releases. The deaths are unrelated and vary between car and motorcycle accidents, gunshots, illnesses and other causes.

At least six soldiers assigned to Fort Hood have died in the first five weeks of 2017, which outpaces the count from last year. The sixth death in 2016 was recorded on May 9, when Staff Sgt. Ellsworth Allen Raup was killed in a motorcycle accident.

Agents from other commands are investigating Hines’ death, Christopher Grey, a Criminal Investigation Command spokesman, said Thursday. Grey said the agents will conduct the investigation just like any other death probe, though he said the decision to bring in another command was made in part to avoid complications with agents investigating the death of a colleague.

“It’s very traumatic to investigate one of your own,” he said.

The command, commonly known as CID, has not yet released which unit is handling the investigation, Grey said.

The decision to bring in outside investigators was likely made to avoid allegations of impropriety, said Sky Gerrond, a former Air Force security forces officer. While Gerrond did not investigate deaths directly during his military career, he assisted agents working death cases assigned by the Office of Special Investigations, the CID equivalent in the Air Force.

“CID is a close knit and small community. The investigators [at Fort Hood] would have all known him,” he said.

More so, it is likely some of his colleagues in the battalion could be questioned during the investigation, Gerrond said. Activating outside agents is also a way to insulate people in case others were involved in the death, he said.

“It makes sense in that worst case scenario,” Gerrond said.