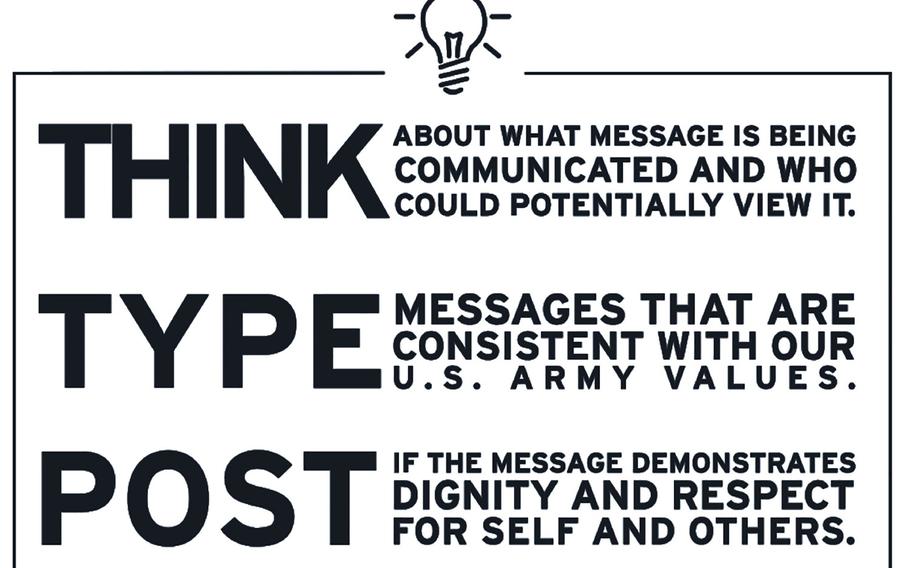 A May, 2020 reminder from the U.S. Army to its troops about the rules for social media. (U.S. Army Garrison Fort Lee)

Soldiers can now face punishment for social media posts supporting extremist groups, under a major revision to the Army’s policy guidance to its commanders.

The first overhaul of Army Regulation 600-20 since 2014 includes more than 60 changes, from minor updates to a host of measures meant to ensure soldiers and civilians are treated with dignity and respect.

Updates now bar online fundraising, promotion and advocacy of extremist causes or criminal gangs on social media. They follow several recent high-profile incidents of troops espousing support for such groups or taking part in their rallies.

The new Army regulation requires commanders to take early preventive action when they witness behavior that, while not prohibited, may be a sign of extremist sympathies. For example, while membership in a racist group alone may not be prohibited, it could be grounds for a commander to counsel a soldier or investigate further, the new regulation states.

It also gives commanders options for punishing online activity that crosses the line into misconduct. This could include charges under the Uniform Code of Military Justice, administrative discharge, blocked reenlistment and other administrative or disciplinary action.

“Social media was not addressed in the previous regulation,” Lt. Col. Melissa Comiskey, chief of command policy for the service, said in a statement last week.

The policy now includes notifying the staff judge advocate or Criminal Investigation Command when there are “any type of reports of extremist activities in their organization,” the statement said.

The regulation was also updated to address a gap that a domestic violence working group identified, Comiskey said.

It now requires company and battery-level commanders to brief in-processing members on the Lautenberg Amendment to the Gun Control Act of 1968, which prohibits anyone with a misdemeanor domestic violence conviction from possessing firearms or ammunition.

The military came under scrutiny for failures to report service members’ criminal histories to the FBI, which maintains the databases used to vet gun buyers, after the November 2017 mass shooting at First Baptist Church of Sutherland Springs in Texas.

Devin Kelly, the gunman who had been discharged from the Air Force in 2014 after being convicted of beating his first wife and assaulting his stepson, was one of 7,000 airmen whose backgrounds the Air Force failed to report. Three dozen families are suing the government for negligence in the matter.

Other updates to the over 220-page document incorporate policies related to combating discrimination and promoting greater racial, gender or religious inclusivity. They include directives related to breastfeeding and religious accommodations for uniforms or grooming standards.

The regulation, which is typically updated every five years, also now clarifies that commanders may use on-the-spot corrective actions for minor disciplinary infractions, such as requiring a soldier to do 10 pushups for arriving late to a formation.

“The changes empower [noncommissioned officers] to lean on nonpunitive measure as a form of corrective training,” Sgt. Maj. Jasmine Johnson, the command policy sergeant major, said in the statement.