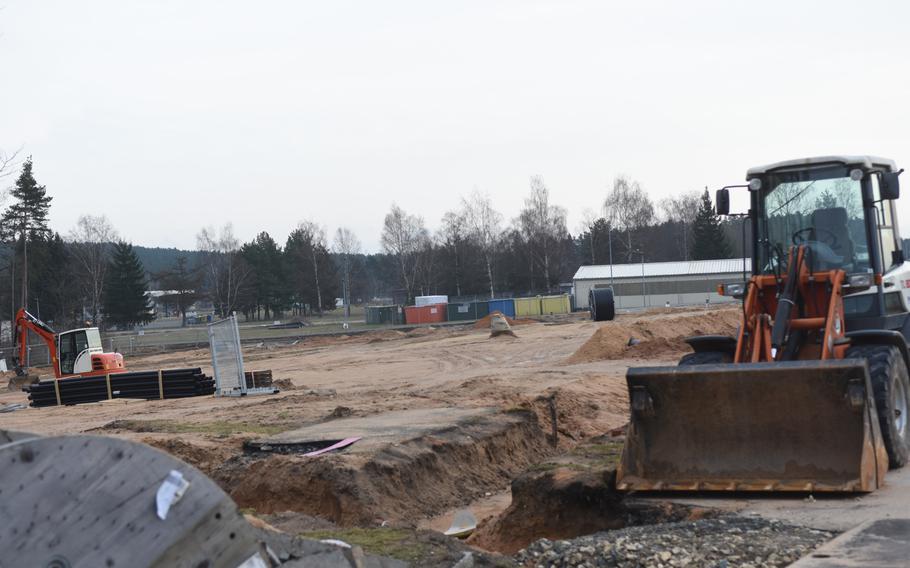 GRAFENWOEHR, Germany — The Army plans to build new facilities at the Grafenwoehr Training Area this year, mainly to support the increased training requirements in Germany and Eastern Europe.

The projects, valued at about $70 million, are set to begin this spring with work on a vehicle-maintenance shop and a modern training support center.

The new $20 million training facility, which will include classrooms and combat simulators, will be located at Camp Algier, adjacent to the main post. It will replace 16 different buildings spread out around the training area, cutting down on travel time for soldiers.

“The construction of these new buildings underlines the Army’s efforts to provide state-of-the-art home facilities, allowing best training opportunities for its soldiers and their partners within NATO and allied forces,” Army spokesman Nathan Van Shaik said.

The new training center will have several different types of simulators covering artillery, anti-tank, and other infantry skills, said Training Support Center chief Peter Rocha. Some of them will be portable.

Many of the simulators and training devices are designed so that as many as 25 soldiers at a time can check them out and easily take them to a classroom within the facility. The centralized location will help soldiers rotating though the area conduct training without wasting time getting around an unfamiliar base.

The $50 million vehicle maintenance shop, located near the main post on Camp Aachen, will provide a place for soldiers to take care of the tactical vehicles in use in the training area, such as the Strykers belonging to the 2nd Cavalry Regiment based in Vilseck, or the various heavy-armor platforms brought over from the U.S. in support of Operation Atlantic Resolve and the enhanced forward presence in Poland. Atlantic Resolve and the forward presence are initiatives aimed at reassuring allies along Russia’s western border.

The new buildings will be located outside the natural protected areas of the base. Because of the clearing of land needed to make room for the facilities, new trees will be planted in other areas of the base, in keeping with German environmental laws.

“A forest conversion process with environmental impact assessment, including German public information was implemented,” Van Shaik said. The projects are being planned and constructed in a joint effort between the U.S. Corps of Engineers and the German Amberg-Sulzbach Bavarian State Construction Office.