Army plans to reopen meat factory on outskirts of Baghdad 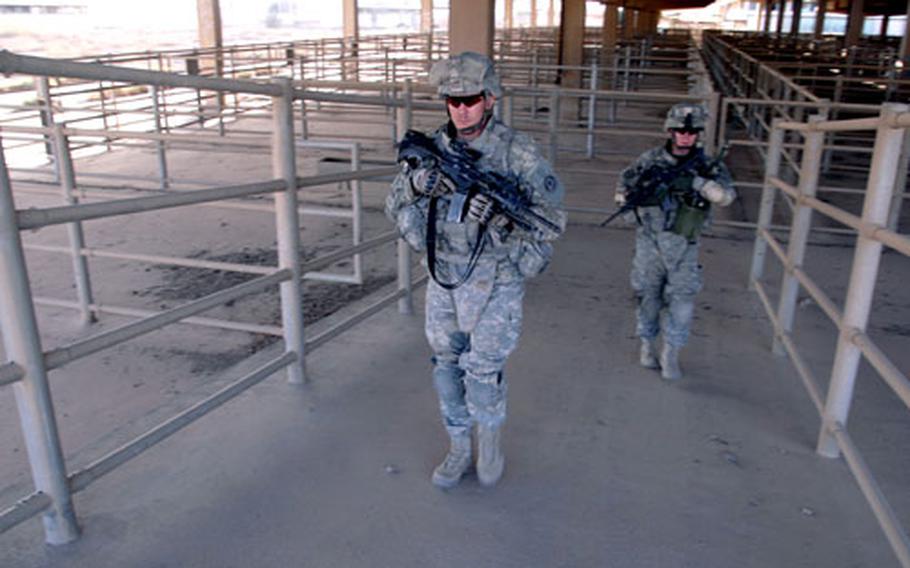 BAGHDAD &#8212; A U.S. Army plan to reopen the largest meat works in Iraq could employ 4,000 people, but damage caused by looters means the project will not be easy.

The complex includes a stockyard, where cattle and sheep were brought from all over Iraq; surrounding pastures, where the animals were fattened; a chicken farm; an abattoir, where the stock was slaughtered; a meat processing plant; packaging and warehouse facilities and a shipping center where products were loaded onto trucks for transport to Baghdad retailers.

Unfortunately, in the chaos that followed the U.S.-led invasion of Iraq in 2003, looters wrecked the factory, smashing windows, ripping out electrical wires and removing or damaging equipment. Today the complex looks similar to the set of a post-apocalyptic action film and the surrounding pastures are overgrown with head- high weeds.

The 25-year-old said he used to make Kubah &#8212; an Iraqi meal made of bread and meat. Kubah was packaged and shipped to shops in Baghdad each day, he said.

Since the factory closed, Saleh and his father, who was employed as a guard, have been out of work. The family farm, which is close to the factory, is not productive because of broken irrigation equipment. It doesn&#8217;t help that coalition helicopters regularly strafe and rocket the land to stop al-Qaida mortar teams using it as a base, he said.

In the meantime, his family of 11 people subsists on government food vouchers, said Saleh, a keen Arsenal soccer club supporter who is hoping for a job guarding critical infrastructure in his neighborhood.

If and when the factory reopens, both Saleh and his father will apply to get their jobs back, he said.

Soldiers from Company D, 2nd Squadron, 2nd Cavalry (Stryker) Regiment, who man a combat outpost in the factory&#8217;s administrative building, are working with local leaders to get the factory running again.

Company D 1st Sgt. Michael White, 44, of Tucson, Ariz., said cost estimates for the job range from $5 million to $1 billion. Clearly, there is a lot more work to do, but the company&#8217;s goal is to reopen the factory before it leaves Iraq this time next year.

With that in mind, electricians have set up their own power system for the COP, so they don&#8217;t interfere with the factory&#8217;s original electronics, and a room full of factory blueprints has been preserved to help with the restoration, he said.

&#8220;We are going to employ Iraqis to get the plant going,&#8221; he said during a tour of an old dining facility in one of the factory buildings.

Nearby, the plant&#8217;s motor pool is intact, next to a machine shop with equipment parts sitting untouched in packing crates. The parts might come in handy fixing machines damaged by looters, White said.

A big pile of machinery lies just outside the COP&#8217;s perimeter. The equipment was left outside by looters and pushed to one side by the Army to make way for a helipad, White said.

Company D&#8217;s commander, Capt. Doug Willig, a 29-year-old Fort Wayne, Ind., native, said the meat factory project is one of several that the Army is facilitating in his area of operations.

Others include helping build a new school and setting up checkpoints, manned by local Iraqis, to guard critical infrastructure, he said.