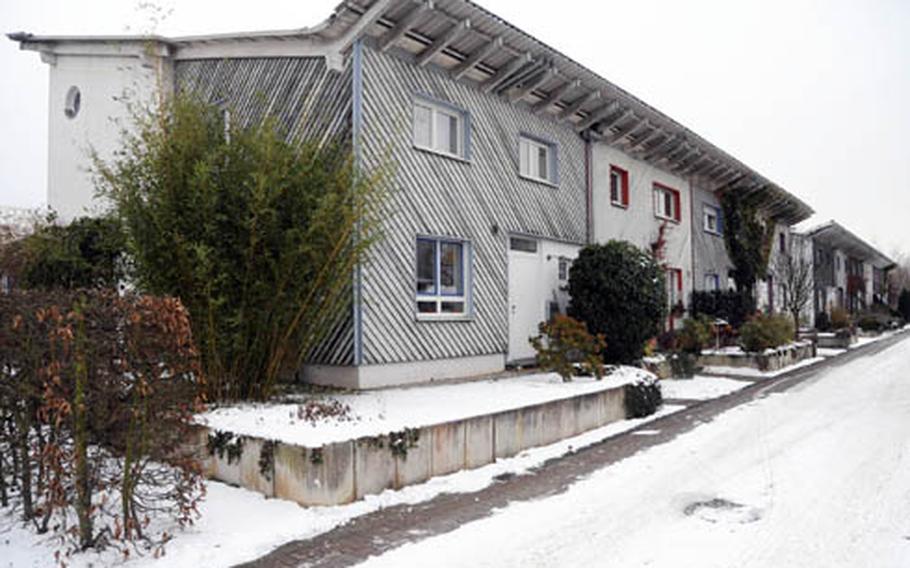 A passive energy house in Darmstadt, Germany. The Army plans to build similar energy-saving houses in a new housing area to be built for U.S. Army Garrison Ansbach. (Michael Abrams/S&S)

GRAFENW&#214;HR, Germany &#8212; The Army is experimenting with a new kind of power-saving house that uses about one-quarter as much energy as most new European homes.

Plans call for 22 "Passivhaus" homes to be built as part of Phase I of a 520-unit military housing area next to Shipton Barracks in Ansbach, according to U.S. Army Corps of Engineers project manager Jim McPeak.

The new homes will cost 10 to 20 percent more than ordinary houses to build, but the energy savings &#8212; mostly the decreased cost of heating &#8212; mean the extra construction cost will be recouped within a couple of years, he said.

A report in the New York Times last month estimated there are about 15,000 passive houses worldwide, mostly in German-speaking countries and Scandinavia.

According to Germany&#8217;s Passivhaus Institute, "A passive house is a building in which a comfortable interior climate can be maintained without active heating and cooling systems. The house heats and cools itself."

The key to passive house energy efficiency, according to the Passivhaus Institute, is using insulation, glazed windows and mechanical ventilation to retain heat in the home and capture incoming heat from the sun. A passive house recovers "waste heat" from exhaust air and even recycles heat from appliances, lighting fixtures, and body heat from people or animals inside the building.

Other features of passive houses include: compact form, southern orientation to take advantage of heat from the sun, underground ducts that use soil to heat incoming air, solar hot water heating and energy-saving household appliances.

The Passivhaus Institute&#8217;s Web site half-jokingly states that living in a Passivhaus does not require an advanced degree.

"Passivhaus technology is so simple, there&#8217;s no need to hire someone to perform annual air filter changes," the site explains. "The ventilation system has fewer controls than a normal television."

In November, the Army awarded a $52 million contact for Phase I of the Ansbach project, U.S. Army Corps of Engineers project engineer Walter Bogdanow said in an e-mail to Stripes. Another 116 units &#8212; also to be built in Phase I &#8212;will adhere to what&#8217;s known as the EnEV standard, the current German energy-saving home standard, which still bests the typical American standard.

Phases II and III, which call for another 392 dwelling units, might also include Passivhaus neighborhoods, but that decision has yet to be made, officials said.

The results will be evaluated for possible future expansion in other locations, White said.

McPeak said the first residents in the new Ansbach housing area &#8212; soldiers and family members from the 12th Combat Aviation Brigade &#8212; are expected to move into the passive houses in 2010.