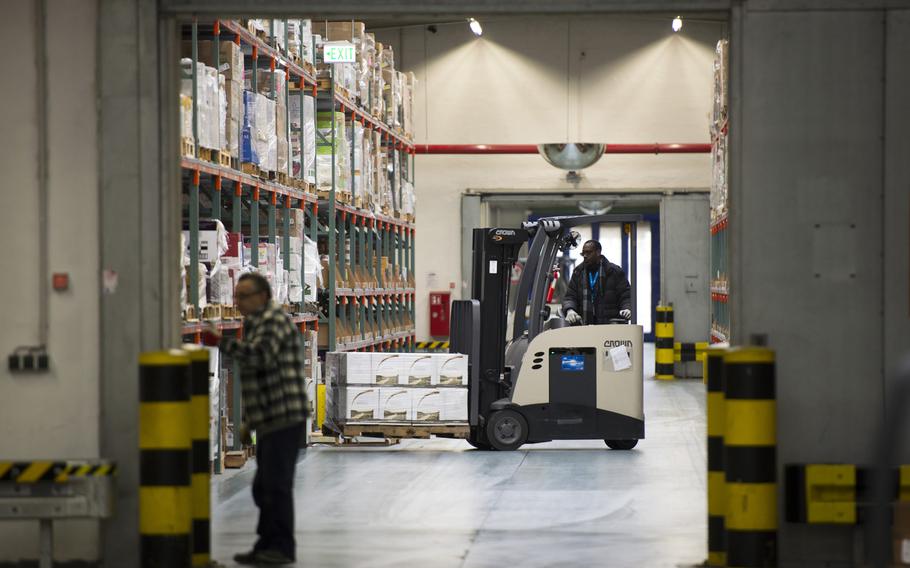 A forklift operator moves a pallet at the Army and Air Force Exchange Service distribution center at Germersheim Army Depot, Germany, on Wednesday, Feb. 1, 2017. The Defense Logistics Agency is seeking approval from the German government to increase storage space at the depot. The project comes on the heals of AAFES' recent opening of a central distribution site at the Germersheim site. (Michael B. Keller/Stars and Stripes)

STUTTGART, Germany — The U.S. military is seeking approval from German authorities to increase storage space at an Army depot in the southwestern town of Germersheim, where a $1 million renovation is planned.

The Defense Logistics Agency wants to stockpile oil and other petroleum products to ensure sufficient reserves are in place “to better meet the U.S. military’s commitment to NATO,” the agency said.

“There will be no additions to the types of items that are currently stored in the warehouse — the project simply increases the storage capacity of existing items,” DLA said in a statement.

The plan is to renovate a DLA warehouse building at the Germersheim Army Depot, but some residents have expressed concern about the initiative.

Germersheim’s mayor worries that the expansion plan, which could more than double the amount of hazardous material in storage, might pose an environmental risk.

DLA said that beside petroleum products, the items to be stored include hydraulic fluid, antifreeze, brake fluid and fog oil.

The goods are all pre-packaged by the manufacturer, which reduces the risk of accidental spills of hazardous material, DLA said.

“The upgrade project will meet or exceed the more stringent of all applicable German and U.S. regulations, and the German government will inspect the construction work upon completion,” DLA said.

The project is now under review, with residents allowed to raise objections with German authorities until May 9 as part of a hearing process.

Earlier this year, the Army and Air Force Exchange Service opened its new Europe distribution center at the Germersheim depot. The move was part of an effort to bring products closer to military customers in Europe and downrange.