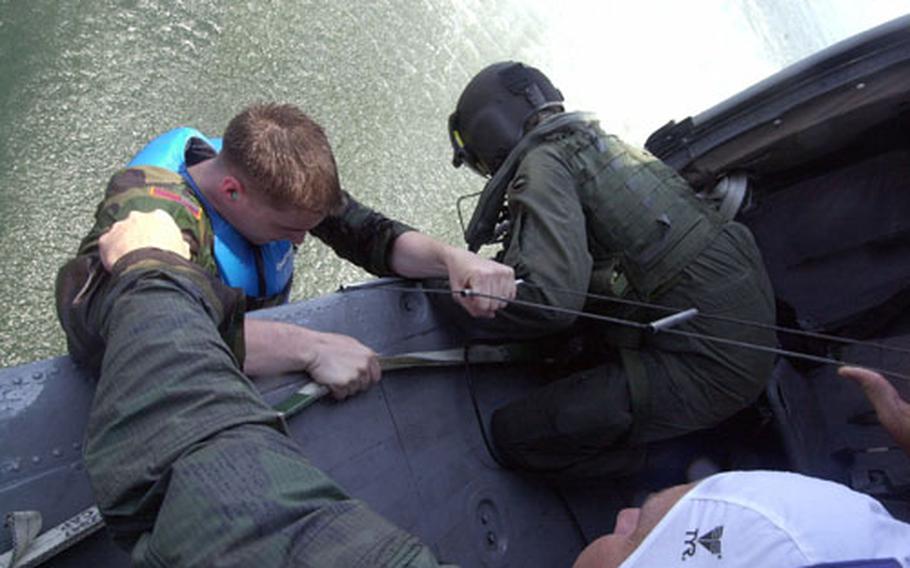 Sgt. Earl Wicks of the 78th Aviation Battalion climbs up the cable ladder during helicopter extraction training between Sarushima Island and Yokosuka Naval Base in Tokyo Bay. (Jim Schulz / S&S)

YOKOSUKA NAVAL BASE, Japan &#8212; Through the spray of seawater, it&#8217;s hard to see the small cable-and-aluminum ladder barely a hand&#8217;s- width across bouncing in the waves.

But members of the Army&#8217;s 78th Aviation Battalion from Camp Zama each must find and ascend that ladder as part of their annual water-survival training.

On Thursday, the bulk of the battalion &#8212; pilots, crew chiefs, air traffic controllers, refuelers and medics &#8212; plunged from a Black Hawk helicopter to practice ditching and extracting over water, training that prepares them for an emergency when they might have to bail out and be rescued by another aircraft.

As the soldiers jump in uniform and boots, they cross their legs and cover their faces to reduce the chance of injury. Jumpers have been injured hitting their heads on the helicopter as they fall or by falling incorrectly. Others have slipped off and fallen while climbing back up.

All the while, they face a tangled mass of white jellyfish in Tokyo Bay.

&#8220;It&#8217;s one of the most intense water programs in the Army,&#8221; said Sgt. John Valverde, a crew chief. This is partly because their mission takes them over water more often than other commands.

The training includes four parts, some mental and some physical. Soldiers start with several swim tests in a pool, sometimes wearing uniforms and boots.

The soldiers then are thrown into a pool in a survival water egress trainer, or SWET, a chair device that plunges the occupant into the water with the force and confusion of a crash. They do that again blindfolded.

&#8220;So you get the feeling of being disoriented,&#8221; said Capt. Daniel Rice, training and operations officer.

Next is dunk training on Okinawa in a simulated cockpit and cargo area that&#8217;s similar to the SWET chair. The training usually involves rotated dunks since a downed helo often flips in water.

That&#8217;s the mental part, he said &#8212; staying calm as water rushes into your head. They also study the physics of air and how it acts under water.

Finally, they practice ditching over the sea.

Pilots and crew practice until each part is familiar and the fear subsides. They&#8217;re assisted by water-survival instructors such as Ruiz and Dreeson who have specialized training to assist soldiers.

Fear, Ruiz said, increases the chance of death in an emergency.

The soldiers jump from 10 feet at 10 knots. It&#8217;s the same procedure they would ideally use in an emergency or when dropping off special operations troops. They practice parts of the training &#8212; such as climbing the ladder &#8212; back at their hangar. But the real thing stings with seawater and deafens unprotected ears.

Climbing up, the winds push you down, water blasts your face and a drenched uniform and boots add weight. For the first four rungs, it takes arm strength alone until you get high enough to position a boot on the ladder. And if the soldier has been in the water, exhaustion can set in.

The exercise trains pilots, as well. They must maneuver over the jumpers and hold a manual hover, one of the hardest skills to do over water where there are few points of reference to focus on, Purser said.

The training creates a more cohesive battalion since everyone, officer and enlisted, works together.

Rice recently came from a combat mission in Iraq with the 101st Airborne Division, where training was focused on avoiding the enemy and managing heat, wind and sand.

Here the training is still as serious, but more controlled and a lot more fun, he said.