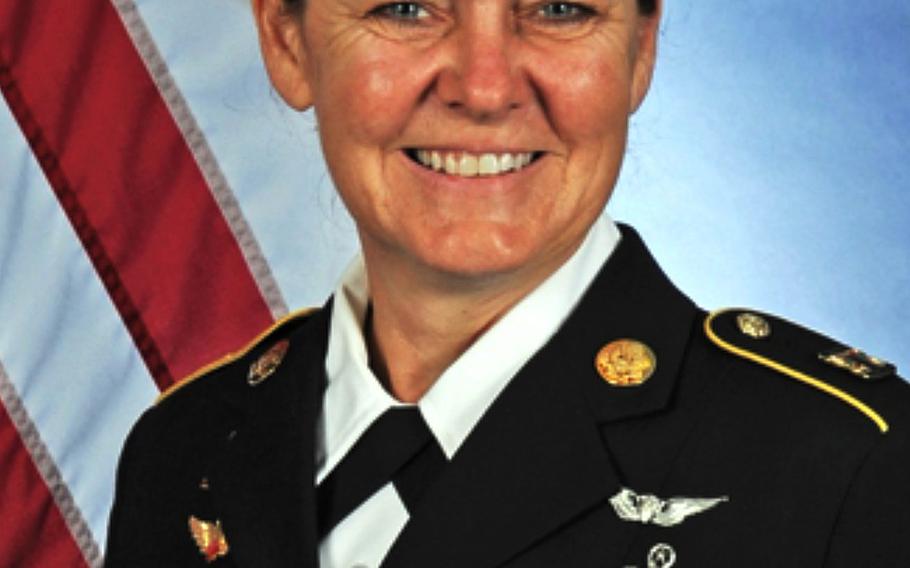 Lyon, who has spent most of her career in military intelligence, is currently the senior enlisted leader for Joint Functional Component Command for Global Strike at Offutt Air Force Base, Neb. She’s expected to take over as USAREUR’s senior enlisted in May.

“I selected CSM Lyon because she was the best fit for what we needed in ‘Strong Europe’ as our senior noncommissioned officer and to ensure the best possible leader development of the thousands of enlisted soldiers in Europe,” Hodges said in a statement provided by his command.

After graduating from Western Kentucky University with a bachelor’s degree in Spanish, Lyon joined the Army in 1991 as a signals intelligence analyst, she wrote in a 2008 paper about her Army experience for the U.S. Army Sergeants Major Academy.

Though she offered few details in the paper about her service, Lyon wrote about some of her assignments in her first 17 years, including a stint at the former Army listening station at Bad Aibling, Germany.

The base, whose operations fell under the umbrella of the National Security Agency, was controversial long before Edward Snowden’s revelations about the NSA’s spying activities. Before its closure in 2004, many Germans believed Bad Aibling was part of a network of outposts the U.S. used to spy on telephone and Internet traffic across the globe.

It was while assigned to Bad Aibling that Lyon said she was recruited for a secretive special mission unit.

In the special mission unit, she wrote, “I saw and did things that I would never have had the opportunity for in any other assignment.” She deployed with the unit to the “GWOT,” she wrote, using the military’s acronym for the global war on terrorism. “Unfortunately, I can say no more about it than that.”

She spent eight years in the special mission unit before returning to the conventional Army, she wrote.

USAREUR has spent much of the last year engaged in exercises in eastern Europe meant to reassure allies after Russia’s annexation of Crimea from Ukraine last year. Lyon will serve as adviser to Hodges, who took over as USAREUR commander in November. He has not shied away from calling Russia out over its role in the Ukraine conflict.

Hodges picked Lyon from a pool of a half dozen command sergeants major the Army selected to interview for the position, according to USAREUR.