Army part-day preschool programs in Kaiserslautern to continue into June 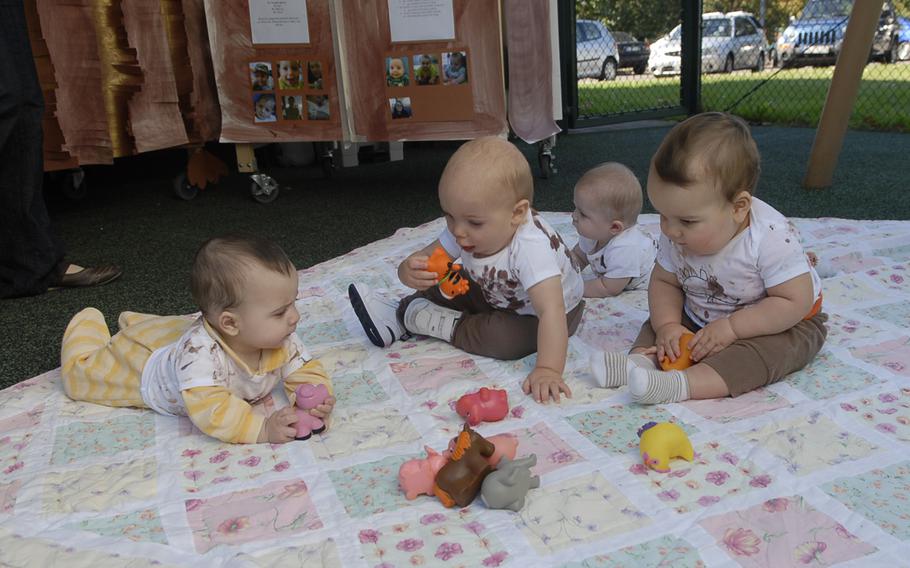 Babies spend time outdoors on a warm fall day at the Air Force's Vogeweh Child Development Center in Kaiserslautern, Germany. Army officials in Kaiserslautern say they?ll be able to continue part-day child care programs next month, despite concerns those programs might have to close because of staffing shortages related in part to the federal civilian hiring freeze. ()

KAISERSLAUTERN, Germany — U.S. Army Garrison Rhineland-Pfalz’s part-day preschool programs will continue through the remainder of the school year instead of stopping April 1, as had previously been planned because of staffing shortages compounded by the federal hiring freeze, officials said.

In a letter to parents to be distributed on Monday, officials said that “despite the hiring freeze,” there will be no disruption to part-day preschool or Strong Beginnings. “These programs will continue as planned for the remainder of the school year and graduate as originally scheduled.”

Those programs were to close April 1, officials said last month, had there been no relief from the hiring freeze.

The Army in early March approved hiring exemptions for more than 3,000 child care positions at garrisons worldwide, clearing the way for child care centers to restart the hiring process after nearly a six-week stoppage.

Army officials warned at the time, however, that programs might not resume immediately, since the hiring process could take months because of required background checks, training and certifications.

“It’s not an immediate lights-on,” said Michael Formica, director of Installation Management Command Directorate-Europe, in an interview shortly after the hiring exemptions were approved.

In Wiesbaden, another garrison which had to reduce child care services after the hiring freeze was implemented, the Strong Beginnings program is slated to reopen on April 10, said garrison spokesman Jacob Corbin on Monday. The garrison’s other two part-time programs, for preschoolers and toddlers, have no firm restart date, he said. “We’re continuing to hire and train new CYS personnel in preparation for reopening those programs,” Corbin said. The garrison’s part-day child care programs were temporarily suspended March 1.

Though Army part-day programs will continue in the Kaiserslautern area, the waiting list at the garrison’s child care facilities for new families is still frozen, and hourly care remains suspended, garrison spokesman Stefan Alford said in a statement.

The garrison is also not accepting new enrollments in School Age Center summer camps; anyone currently enrolled will have a space for the summer.

Alford said the Army was working to overcome the challenges of filling vacancies in several high turnover career fields, including CYS.

“The problems associated with chronic staffing shortages predate the hiring freeze; the freeze simply accelerated these challenges,” he said.