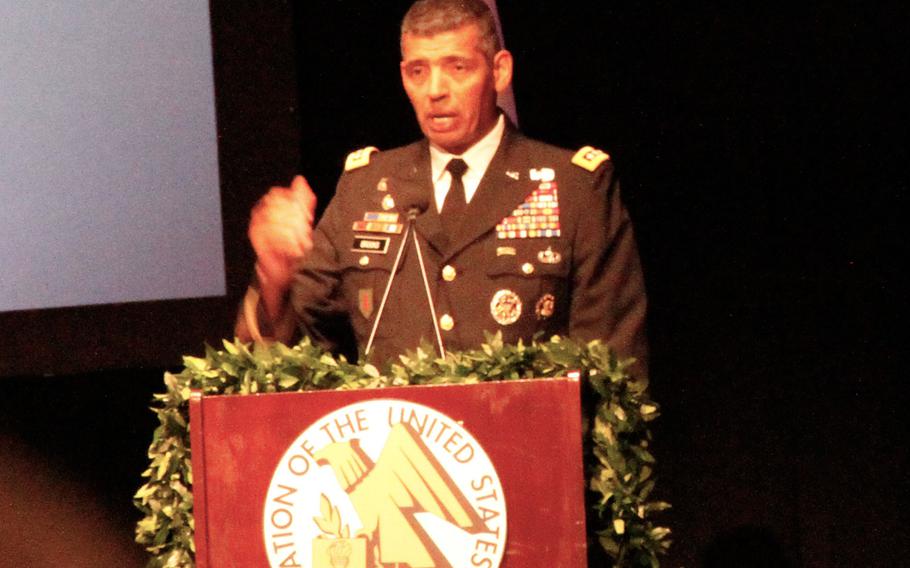 Gen. Vincent Brooks, commander of U.S. Army Pacific, delivers the opening speech at the LANPAC Symposium in Honolulu on Tuesday, May 19, 2015. (Wyatt Olson/Stars and Stripes)

FORT SHAFTER, Hawaii — The U.S. wants a “robust” relationship with China “that can weather the difficult challenges that are still unaddressed,” the head of U.S. Army Pacific said Tuesday.

And the foundation for national-level relationships between the two countries, Gen. Vincent Brooks said, is “military-to-military, land force-to-land force connections” forged by exercises and exchanges.

Brooks was addressing a symposium, sponsored by the Association of the United States Army’s Institute of Land Warfare, which brings together representatives from many Pacific nations to explore how to enhance land-force capabilities.

Last year, U.S. Army Pacific kicked off Pacific Pathways, an initiative to project a stronger land-based presence in the region through sets of expeditionary-style exercises, lasting months at a time.

Brooks said that even as the Pacific region is quickly evolving politically and economically, “significant hazards remain, where the potential of conflict is only a few missteps or miscalculations away.”

He specifically mentioned North Korea, which “has dangerous weapons that continue to threaten many, if not most, of the countries in this room.”

Other hazards come from contested areas where borders or national sovereignty is in dispute, which could potentially lead “land forces to face one another,” he said.

Although Brooks only alluded to China while mentioning potential conflicts, he was later asked to specifically comment on relations with that nation’s People’s Liberation Army during a question-and-answer period with the audience.

“We send out invitations to remain engaged, and the People’s Liberation Army is always included in those invitations. We want them to be in venues like this.”

He said opportunities to engage with the PLA are increasing, “guided by a national-level discussion and top-level leadership that says, ‘We want you to work together.’

“So we’re taking advantage of that strategic direction and guidance.”

Engagements with the PLA, however, are limited to what are allowed by the provisions of the National Defense Authorization Act of 2000 — basically restricting activities of a strategic or combat nature.

That leaves the area of humanitarian assistance and disaster response, he said.

“I’m of the opinion that we have more than adequate latitude within that set of authorities to do quite a bit of engagement,” he said.

He cited two examples, including a disaster management exercise hosted by the Guangzhou Military Region and held in the southern province of Hainan in January. The U.S. brought teams comprising all the components under U.S. Pacific Command, as well as the U.S. Corps of Engineering and other State Department agencies.

He also pointed to the survival exercise Kowari, held in and hosted by Australia last fall in its rugged outback terrain.

The U.S. sent five Marines and soldiers each, while the PLA and Australia had 10 each.

“This demanded not only military hardihood among the men and women who participated among those 30, but it required trust to be built, trust that’s necessary to survive. That’s a big deal,” Brooks said.

“We know — and we are not ignoring the fact — that there are significant challenges as well in other arenas. We cannot ignore that fact. We don’t hide from that when we have a conversation with the People’s Liberation Army.”

He said that just last week, he hosted a visit by a general from the Chengdu Military Region.

But when asked what role U.S. land forces might have in regard to maritime disputes over islands, which involve Indonesia, Malaysia, Philippines, Thailand, Vietnam and others, Brooks’ message took on a note of forewarning.

“You know that we seek to work with China as it continues to grow and emerge,” he said. “Every country in this room has a key economic connection with China.”

U.S. land forces, however, are available to help partner nations in the Pacific build capacity in the areas they consider security concerns, he said.

“Land forces can make a difference in maritime environments as part of that expression of defense and deterrence.”