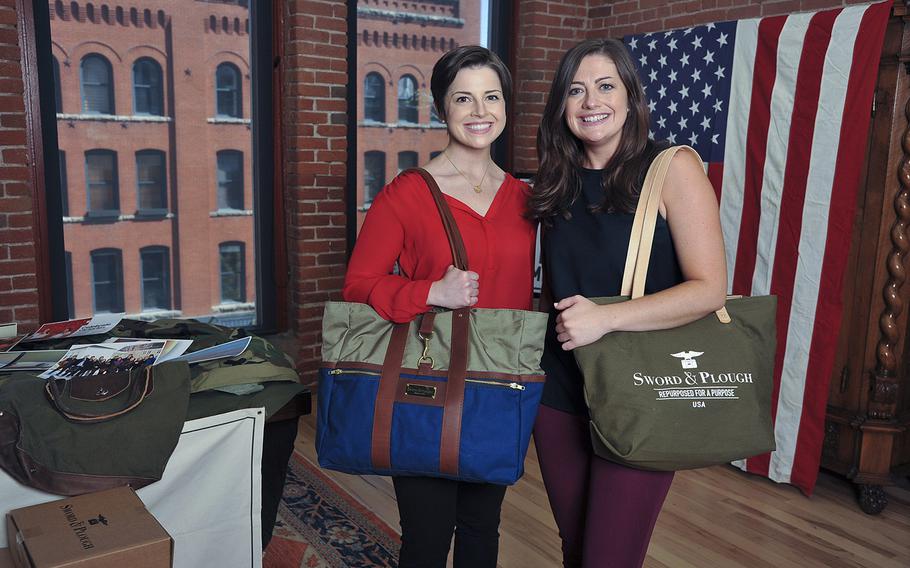 (Courtesy of Sword and Plough)

(Courtesy of Sword and Plough) Emily Núñez Cavness grew up the child of an Army officer and would often wonder what happened to surplus items that she saw piled up across the bases where she lived.

Much of the clothing, bags, tents, and other items were destined for the landfill, she learned, and that sparked an idea. So Emily sat down with her sister, Betsy Núñez, for lunch one day in 2012 and sketched out a plan to put all of those condemned threads to use.

“She was the spunky, fun-spirited inventor of the family,” said Núñez, 28.

The meal stretched for hours and led to the sisters to starting Sword & Plough, a company that makes bags and apparel, such as backpacks, totes, and caps, out of old military gear. The Denver-based operation has gained national attention since 2013 and is now a finalist to win a free Super Bowl Ad in the Small Business Big Game challenge, a contest organized by software company Intuit, which focuses on small business needs. Sword & Plough was one of 10 businesses picked out of roughly 15,000 that entered.

Intuit will pay for the winner to produce an ad. More importantly, it will pony up for 30 seconds of the most coveted air time on television, which cost about $4.5 million during the last Super Bowl.

“We were just blown away when we found out we were a top 10 finalist,” said Cavness, 25, a first lieutenant with 10th Special Forces Group and an Afghanistan veteran. “It would truly be the chance of a lifetime for Sword & Plough - it would be something that we could never do on our own.”

Cavness, who is based at Ft. Carson in Colorado, and is the company’s CEO, was speaking to Stripes by phone during a deployment in Europe (she’s not allowed to say where). Betsy Núñez, the company’s chief operations officer, spoke from Denver, where the company is based, though they sell nationally through their website.

The company’s name comes from the concept of “swords to ploughshares,” meaning turning military weapons into technology for peaceful civilian use and their motto is “repurposed for a purpose.” They get most of their material from surplus auctions and from contractors who have extra or outdated gear that they sell at a discounted rate or give away.

Sword & Plough has a “quadruple bottom line” set up, which means they aim to succeed financially, environmentally, socially, and in taking care of their employees.

“We measure our mission based on social metrics,” Núñez said.

Sword & Plough sends 10 percent of its profits to veterans organizations. They have only four employees but have gone from one to five manufacturing partners to keep up with a growing line of products and subsidize positions at some of their partners to ensure veterans are hired. Veterans and active duty troops receive a 20 percent discount on their products and the sisters want their bags to help bridge the civilian-military divide that has grown in the United States with the advent of an all-volunteer force.

To illustrate the importance of the last goal, Cavness told an anecdote about being the lone Reserve Officers’ Training Corps cadet at Middlebury College, a small liberal arts school in Vermont. Twice a week, she had to drive a two-hour, round-trip for training. One morning, as she was walking to her car in uniform past the college’s performing arts center, another student noticed her.

“All of a sudden this upperclassman comes out and asks me, ‘Hey I haven’t seen you around here before - what play are you in?’” she recalled.

The sisters said their bags are a starting point for civilians, troops, and veterans to better understand each other and they market their products to everyone, regardless of veteran status.

“A lot of time people will ask about our bags and then get into the backstory,” Nüñez said. “That’s where those unique moments of connection or awareness are coming - the product has the ability to start the conversation.”

Voting for the Super Bowl contest ends Nov. 3. To view all the finalists and vote, visit https://www.smallbusinessbiggame.com/contests/sbbg