Army officer files suit after getting shot by Bagram contractor 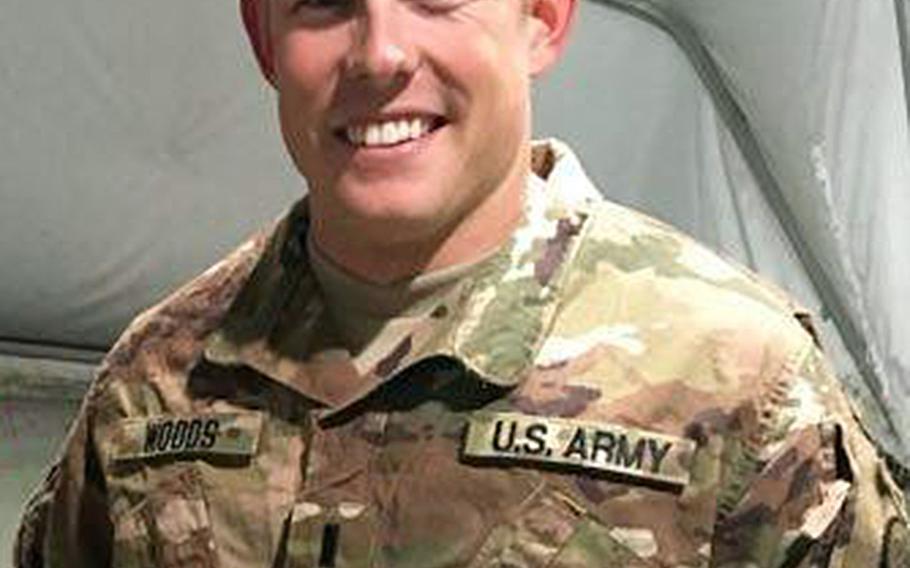 Zachary Woods is pictured here in a November 2016 Army photo taken at Bagram Air Field after Woods was promoted to first lieutenant. Woods, a West Point and Ranger School graduate, was shot in the chest inside a security watch center on the base about a month later, during a debate with a Marine vet about their firearms prowess. (U.S. Army)

Zachary Woods is pictured here in a November 2016 Army photo taken at Bagram Air Field after Woods was promoted to first lieutenant. Woods, a West Point and Ranger School graduate, was shot in the chest inside a security watch center on the base about a month later, during a debate with a Marine vet about their firearms prowess. (U.S. Army) 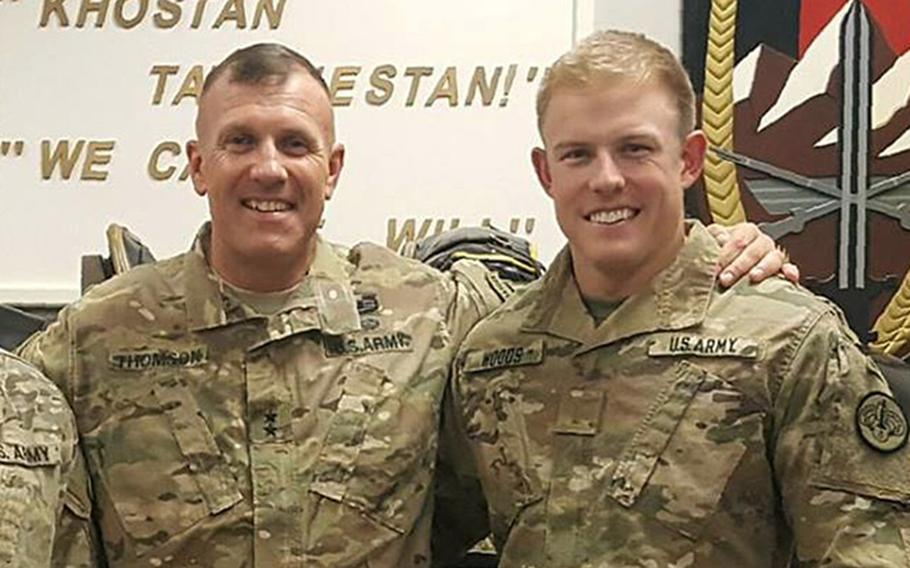 Zachary Woods, right, then a second lieutenant, is pictured at Bagram Air Field in this Army photo from September 2016 with 1st Cavalry Division commander Maj. Gen. John ''J.T.'' Thomson in the days after Thomson took command of the U.S. base about 40 miles north of Kabul, Afghanistan. Woods was shot in the chest a few months later during a conversation in which he and a Marine veteran were talking about their firearms skills. (Courtesy 1st Squadron, 3rd Caval) 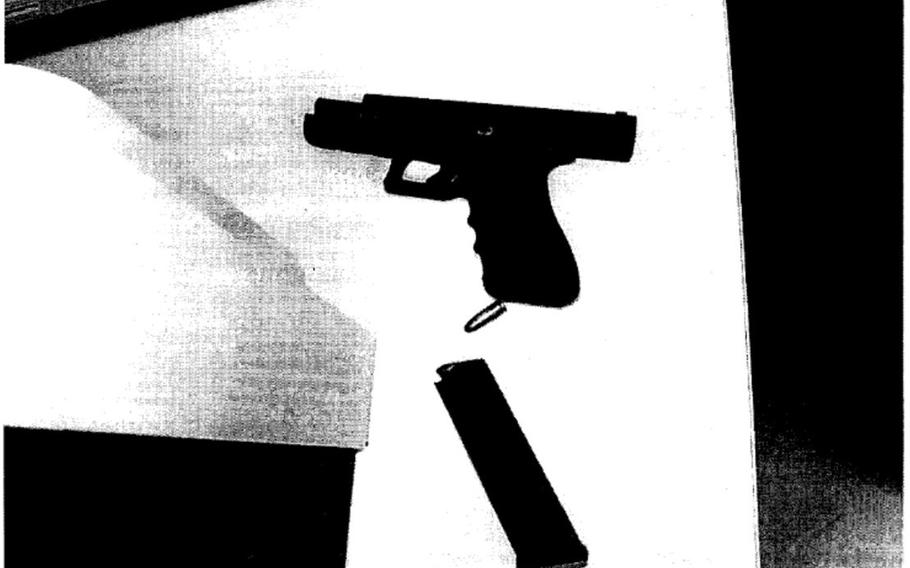 A screenshot shows a scanned photo of a Glock 17, magazine and saved round, on a desk inside the base defense operations center at Bagram Air Field. The photograph was taken by a security official after contractor Dylan Barrett accidentally shot Army 1st Lt. Zachary Woods on Monday, Dec. 19, 2016. (Chad Garland/Stars and Stripes) A screenshot shows a sketch of the Bagram Air Field base defense operations center drawn by security contractor Dylan Barrett on Monday, Dec. 19, 2016, hours after he accidentally shot Army 1st Lt. Zachary Woods while fumbling his Glock 17 sidearm during a discussion about firearms skills. Black boxes cover the names indicating where Barrett recalled others were standing at the time of the incident. The drawing was included in an Army Criminal Investigation Command report on the shooting. (Chad Garland/Stars and Stripes) 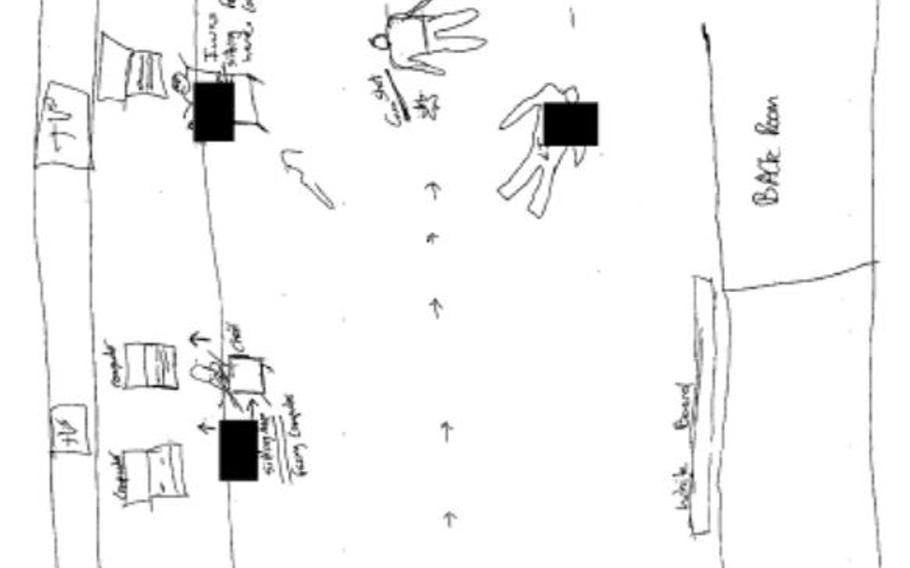 A screenshot of an Army Criminal Investigation Command report shows a sketch of the Bagram Air Field base defense operations center drawn by an unidentified sergeant first class in the hours after security contractor Dylan Barrett apparently shot Army 1st Lt. Zachary Woods while fumbling his Glock 17 sidearm during a boasting session about firearms skills on Monday, Dec. 19, 2016. Black boxes cover the names indicating where the soldier recalled others were standing at the time of the incident, but appears to show arrows indicating Woods moving toward Barrett. The soldier gave a statement to investigators claiming Woods had earlier demonstrated how quickly he could close a distance of about 21 feet. (Chad Garland/Stars and Stripes) 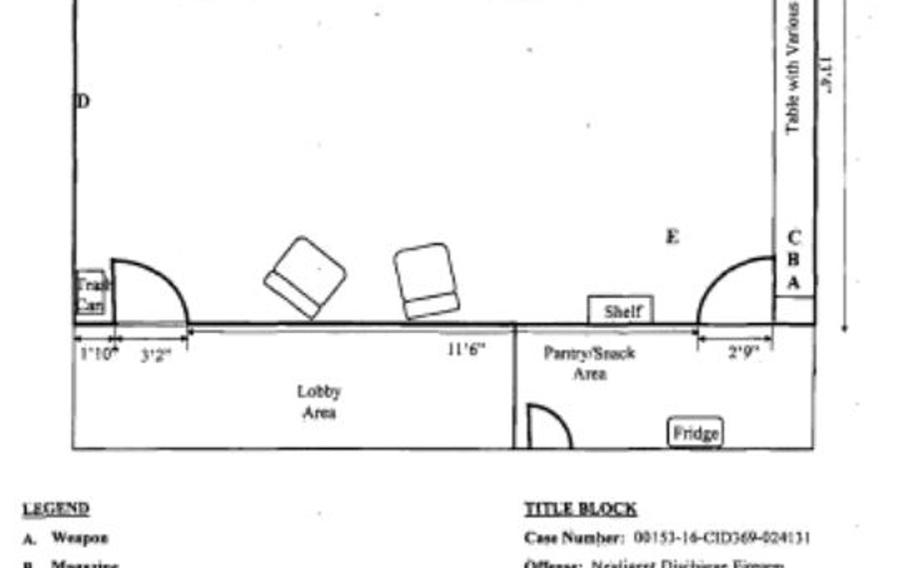 A screenshot shows a drawing of the Bagram Air Field base defense operations center drawn by investigators looking into the apparent accidental shooting of Army 1st Lt. Zachary Woods by Dylan Barrett on Monday, Dec. 19, 2016, while Barrett fumbled his Glock 17 sidearm. The drawing was included in an Army Criminal Investigation Command report on the shooting. (Chad Garland/Stars and Stripes)

The four men on duty had agreed to watch the movie “Anchorman” as they settled into a security shift on Afghanistan’s Bagram Air Field one December afternoon nearly two years ago.

Zachary Woods, an Army lieutenant deployed with the 3rd Cavalry Regiment at the time, was carrying on a friendly debate about handgun skills with Marine veteran Dylan Barrett, a security contractor and former police officer, witnesses said.

What happened next isn’t entirely clear. But the conversation ended with a bang and Woods dropped to the floor with a gunshot wound in his torso.

Woods filed a lawsuit this summer in Illinois’ Cook County circuit court, claiming that “horseplay with a loaded firearm” caused him serious and permanent injuries and pain. The suit alleges that Barrett and his employer, Triple Canopy, were negligent. Woods is seeking more than $100,000.

Triple Canopy’s lawyers say that the company and Barrett were under the Army’s “operational control,” which grants them protection under federal laws, including one that shields the military from state civil suits arising out of wartime activities. However, Woods wants to sue at the state level, where courts wouldn’t consider Triple Canopy’s arguments under federal law.

In August, Woods’ case went to federal court to decide whether he can sue at the state level. Woods’ lawyers have argued that Triple Canopy’s interpretation of federal law shielding the company and Barrett is too broad and doesn’t protect against claims of simple negligence.

Triple Canopy is part of Constellis, formerly Blackwater, which is also named in Woods’ lawsuit. A status hearing will be held next month.

An Army investigation obtained by Stars and Stripes provides more details of the incident, minus names. Court documents Woods filed about the same time included an unredacted section identifying him and Barrett.

The shooting, which officials believe was a negligent discharge, occurred Dec. 19, 2016, on Bagram’s Camp Alpha, an area of the base largely reserved for special operations personnel.

Woods, Barrett and two others — an enlisted soldier and a contractor — were on shift inside the camp’s Base Defense Operations Center, or BDOC, a hub for monitoring security systems, camera feeds and radio traffic.

Investigators found no evidence of foul play, and Woods and Barrett were said to get along like brothers. But witness accounts suggest the shooting was the result of carelessness following high jinks by those charged with overseeing the base’s security.

‘Culture of complacency’ The shooting came at a grim time on the sprawling U.S. base, as officials faced questions about a suicide bombing weeks earlier, the first to strike the heart of the heavily fortified base. Five Americans were killed and 17 others were wounded in the blast near a Veterans Day gathering.

An Army inquiry into the attack found officials had struggled for months against a “pervasive ‘culture of complacency’ and indiscipline … that permeated the forward operating base,” which at the time was home to over 15,000 troops, contractors and civilians.

Woods’ initial lawsuit seized upon that complacency, citing Barrett’s actions as part of larger security lapses at the base.

“After an inordinate delay in the furnishing of weapons necessary for the provision of static security … in protection of the air base, U.S military personnel and others at Bagram Air Field, the Defendant Triple Canopy and/or the Constellis Defendants failed to provide the necessary and proper training, instruction and/or guidance concerning firearm use and safety … specifically including the Defendant Barrett.”

Woods had arrived there in August 2016 as a platoon leader in Bandit Troop, 1st Squadron, 3rd Cavalry Regiment. A West Point graduate and son of a retired Air Force fighter pilot, he’d joined the unit earlier that year after completing Ranger School.

Barrett began working the afternoon security shift sometime after training in October 2016 at a Triple Canopy facility in Moyock, N.C., said the second contractor, an employee of the same firm.

Earlier in the day, the infantry officer and the former Marine grunt had been debating the “21-foot rule,” a theory about the range from which a knife-wielding assailant can fatally attack someone before the victim can draw and fire a holstered sidearm.

Woods demonstrated rapidly closing such a distance in the office, which measured about 23 feet, advancing on Barrett. The contractor stepped aside without drawing on him.

Debates and boasts about shooting were common, Barrett said, but they were not testing the theory when Woods was shot, he said.

Rather, the Marine vet had bragged that he could shoot better because of the superiority of his Glock 17 — his off-duty weapon while a stateside police officer — compared to the soldier’s Beretta M9, he said.

The lieutenant asked him to hand it over.

‘Piercing gunshot’ Though it held a loaded 17-round magazine, Barrett’s gun should have had an empty chamber. It’s common safety practice to clear a firearm before handing it off.

For the semiautomatic Glock, that would mean dropping the magazine out, locking back the slide and inspecting the chamber and magazine to ensure no round is present.

Barrett recounted performing these steps in a different order, starting by drawing back the slide. This could have chambered a round, making the handgun ready to fire with a pull of the trigger, which is where a Glock’s safety lever is located. The M9’s safety is near its hammer.

Next, while removing the magazine, Barrett said he fumbled the weapon. He and Woods reached out to catch it. Barrett recalled grabbing the magazine in one hand, pistol in the other. He didn’t recall hearing the shot.

“Woods fell into him in almost a hug and (slid) down to the floor,” the investigators wrote, based on Barrett’s sworn statement. “He then noticed blood and asked if (Woods) was hit.”

The next moments were a blur as the other men in the room leapt up to help. More people arrived. Someone ran for a medic.

Barrett opened the soldier’s shirt and held a plastic sheet protector over his chest wound, he said. Woods was rushed to a clinic, then to the base hospital. He underwent surgery and was medically evacuated before dawn for further treatment in Germany.

The enlisted soldier and the second contractor weren’t sure later what their colleagues had been discussing right before the shooting. They’d been facing away, doing paperwork and watching TVs and security camera feeds, until hearing what the soldier called a “piercing gunshot.”

After Woods was carried away, the second contractor gathered the firearm, casing and spent round for evidence. The magazine was in the Glock, he said. Another witness recalled him clearing it and ejecting a second round from the chamber, which suggests the magazine was in the gun when it was fired.

Clearly upset, Barrett asked to speak to Woods and blamed himself for the mishap when speaking to investigators that evening. Officials later barred him from all coalition bases in Afghanistan.

Questioned at Landstuhl Regional Medical Center days afterward, Woods had no memory of the shooting, but said it had probably been an accident and that Barrett “was a good guy and means well.”