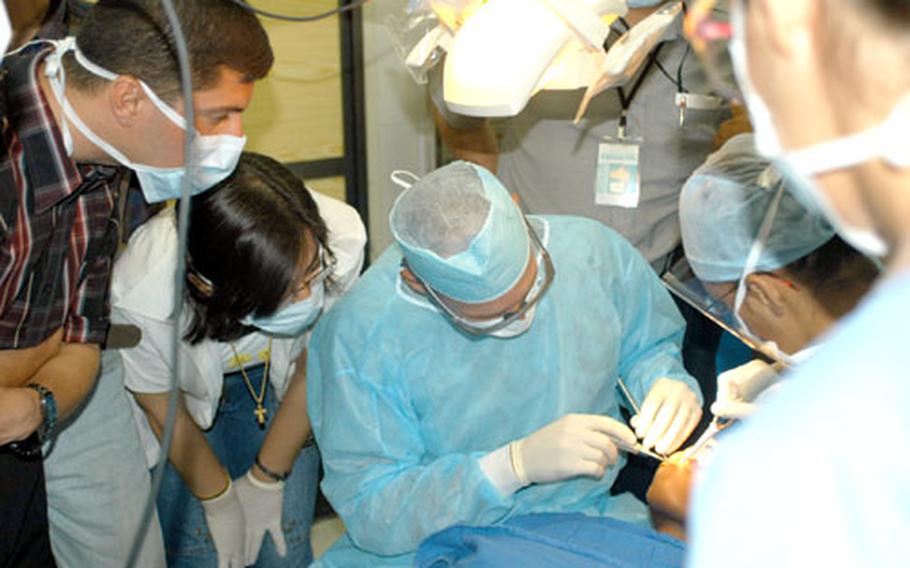 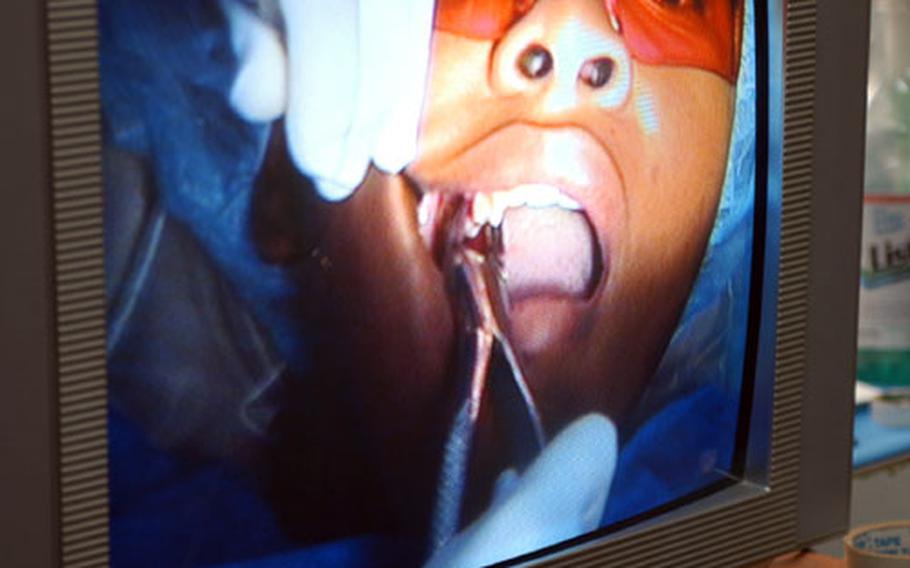 An image on a television, from a camera attached to the surgeon&#39;s lamp, shows Lt. Col. Robert Herold extracting a tooth from Spc. Lahendra McCray Tuesday at the 31st Combat Support Hospital in Baghdad. (Rick Emert / S&S)

In fact, the Iraqi dentists, from the University of Baghdad Dental School, were eager to attend a symposium in April and dental implant surgical training sessions Sunday through Tuesday.

The three-day surgical sessions were joint training for the Americans and Iraqis, as the procedure is in the trial stage for Army doctors to see if it is feasible for an operational theater such as Iraq, according to Lt. Col. James Honey, commander of 257th Medical Company (Dental Services) in Baghdad. Outside of combat zones, however, the dental implants are a common procedure with a 98 percent success rate, Honey added.

&#8220;The primary purpose of [the surgical sessions] is educational exchange between Army dentists and Iraqi dentists,&#8221; Honey said. &#8220;There is an added benefit of conducting the trial on selected U.S. soldiers.&#8221;

Normally, a soldier would wait until the deployment ended to undergo the procedure, which involves extracting a damaged tooth, placing a titanium implant in the bone of the jaw, and then applying a temporary crown, Honey said. Otherwise, he said, the tooth would have to be pulled, and there would be no viable bone or tissue in the area to conduct the implant later.

&#8220;We have had an implant system [at the university] for the past six or seven years,&#8221; said Amer Khamas, a prosthodontist from the school. &#8220;This is a different type of implant system. It is good for us to be exposed to new ideas and procedures.&#8221;

The temporary crown is good for about one year, and McCray can get a permanent one when she gets back to Fort Hood, Texas, early next year, Torres said.

Honey said that McCray would not have experienced pain, and that she could have waited to have the procedure done until she returned to the States.

About 60 faculty members and students from the university attended the symposium in April and seven dentists were invited to attend the surgical demonstrations, Honey said.

The three-day dental implant sessions included one day of lecture, where doctors presented the case studies of the two patients who would undergo the procedure, Honey said.

Monday and Tuesday were practical courses in which the Iraqis observed the procedure on two patients, he said.

&#8220;They have said they really enjoyed the chance to see how we do the procedures,&#8221; Honey said, adding that Khamas was giving a slide presentation later Tuesday on the Iraqis&#8217; procedures for facial prosthetics.

&#8220;It is what we were hoping to accomplish with the educational exchange with Iraqi dentists.&#8221;