Army now has 3 logistics support vessels operating out of Hawaii 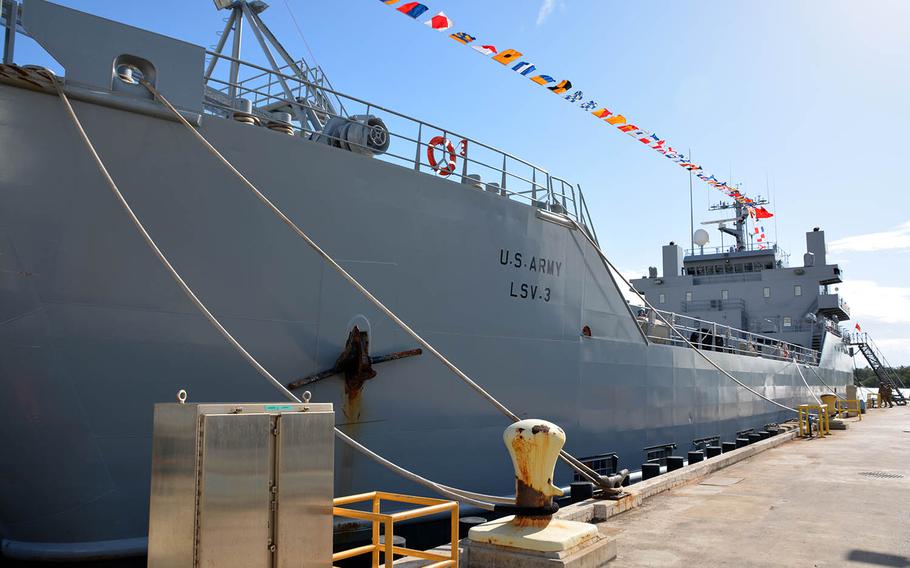 JOINT BASE PEARL HARBOR-HICKAM, Hawaii — With the offering of a traditional Hawaiian blessing Tuesday, the latest addition to the Army’s Hawaii maritime fleet is now expected to enhance the region’s readiness.

U.S. Army Vessel General Brehon B. Somervell becomes the third logistics support vessel, or LSV, to operate out of this Navy base.

“The addition of this vessel allows us greater flexibility to meet the needs of the very complex region,” said Maj. Gen. Susan Davidson, commander of the 8th Theater Sustainment Command, during a ceremony in the open-air cargo area of the 273-foot vessel.

“In moving the Somervell here, U.S. Pacific Command has truly gained a strategic asset,” she said. “When it comes to getting equipment from one place to another in the Pacific, almost everything requires strategic lift. You cannot drive from the Republic of Korea to mainland Japan, or from Hawaii to Okinawa.”

As is often done with the completion of construction or acquiring new equipment in Hawaii, a traditional blessing was offered by a local kahu, or pastor.

“When ancient Hawaiians took long journeys across the region for sustainment missions, they blessed their craft to embark,” Davidson said. “We are honored to follow that tradition.”

The Somervell was formerly assigned to a Reserve unit in Washington but was transferred to Hawaii in August. In the months since then, the ship’s crew has been assigned and trained.

Davidson said it was a yearlong effort to convince the Army that a third LSV, the largest type vessel in the Army’s fleet, should come to Hawaii.

“When there are only eight in the entire Army, and you already have two, you need to be very detailed and accurate in your argument,” she said.

Its reassignment here “symbolizes an investment in the region by our nation,” she said.

It joins the USAV Harold C. Clinger and USAV Lt. General William B. Bunker. The ships are used to support the Army’s Pacific Pathways, as well as the exercises Balikatan in the Philippines, Orient Shield in Japan and Rim of the Pacific in Hawaii. They also regularly deliver troops and equipment throughout the Hawaiian Islands, particularly to the Pohakuloa Training Area on the Big Island.

The Somervell, named for the general in charge of Army logistics during World War II, can carry 24 M1A2 tanks and up to 2,000 tons. The ship has a crew of 31.

Its flat bottom makes it ideal for loading and unloading in places where ships with a deeper draft cannot go. However, the design can make for a bumpy ride in the high seas.

“Normal boats kind of cut through the water,” said Staff Sgt. Jonathan Hale, a crew member who was on the ship for the two-week cruise from Washington to Hawaii. “This has a flat bottom, so we ride the waves. I equate it to like hitting some potholes on the ground.”

Davidson said she was proud of the Army’s mariners, who toil in a part of the Army “that so many know so little about.”

“This is a job that is often described as the best kept secret in the Army,” she said.