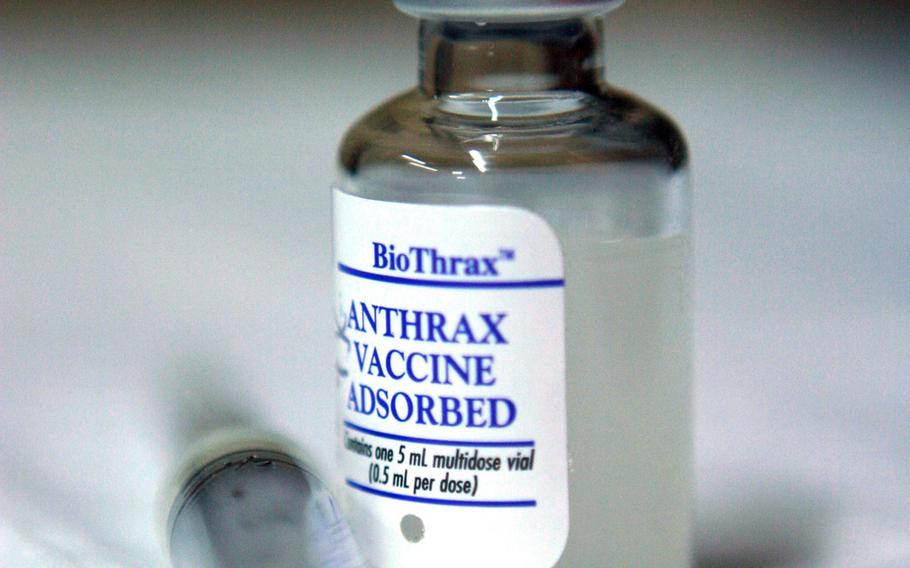 WASHINGTON — The Army told soldiers stationed in South Korea on Thursday that they were not eligible for disability benefits from the Department of Veterans Affairs after the service retracted a memorandum warning of bad batches of the anthrax vaccine.

The Army said the warning of bad batches of the anthrax vaccine was “false” and “completely without merit.”

According to the April 10 memo that circulated online among veterans and servicemembers, its purpose was to identify soldiers who could’ve been affected and notify them of a possible 100-percent disability benefit from the VA because of health risks caused by bad anthrax vaccine batches.

The vaccines were administered at Fort Campbell in Kentucky and Fort Drum in New York from 2001 to 2007 for Operation Enduring Freedom and Operation Iraqi Freedom, the memo stated.

The memo also made the rounds on Twitter and military Facebook groups this week, with some people questioning its authenticity.

The anthrax immunization is required for deployment to U.S. Central Command and the Korean Peninsula, as well as for designated U.S. Northern Command personnel,

emergency response and other units, Wright said. A yearly booster is required to maintain immunity.

At the time the memo was published, the 35th brigade believed the information was correct, Wright said. In subsequent days, the Defense Health Agency has verified it’s false, she said.

“Once the brigade discovered the error, the correct information was published to their soldiers,” Wright said.

A brigade typically comprises of about 2,000 soldiers.

Wright did not clarify what specific information in the memo was incorrect, nor did she say whether there were bad anthrax vaccines administered at the locations and times mentioned in the memo.

But she said the side-effects of the vaccines were “generally mild and temporary.”

“While the risk of serious harm is extremely small, there is a remote chance of a vaccine causing serious injury or death,” Wright said. “In those rare cases, VA disability or death benefits may be granted.”