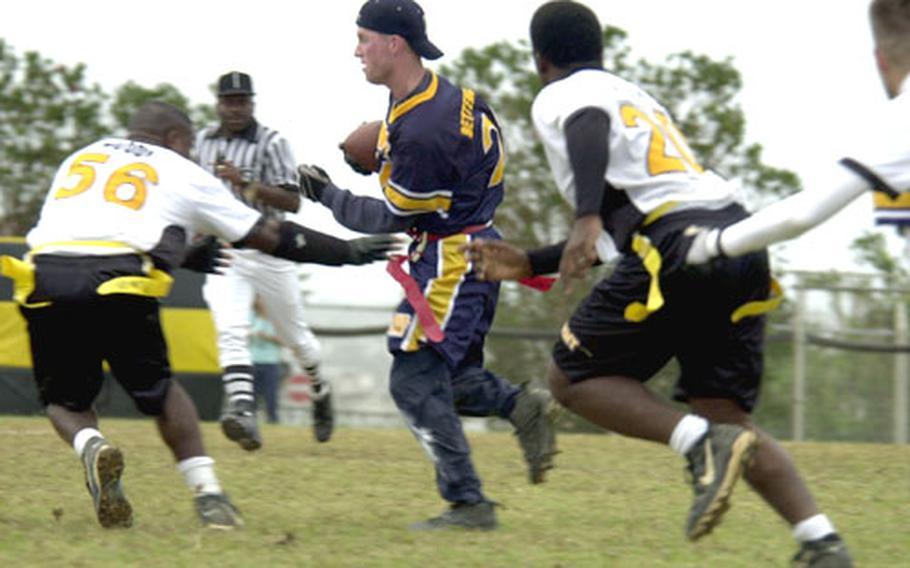 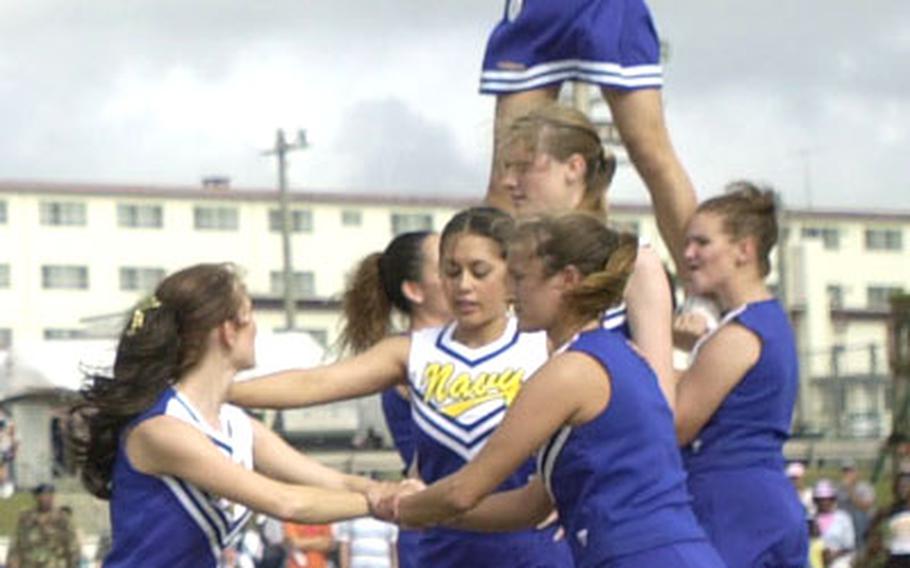 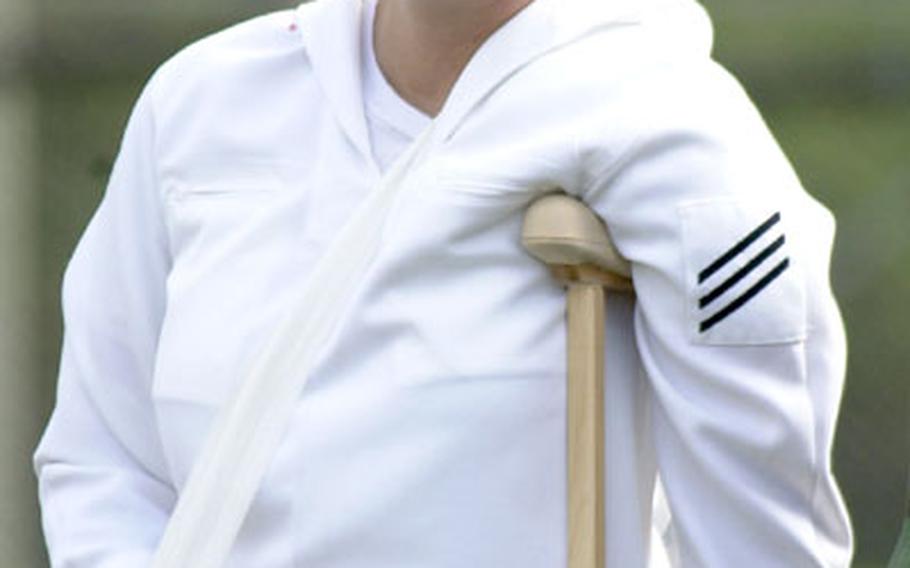 Army Sgt. Alison Davis wears a Navy uniform with fake injuries to support Army players during the game at Torii Station, Okinawa. While Navy didn’t get beaten as badly as she predicted, the team did lose by a field goal in overtime. (Fred Zimmerman / S&S) 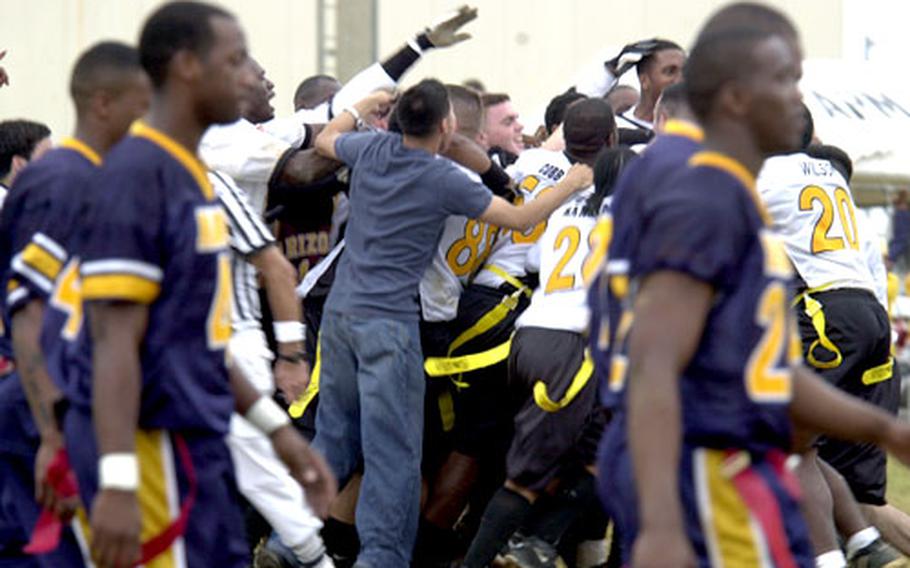 Army players rush the field at the end of the game as defeated Navy players make their way to the sideline. (Fred Zimmerman / S&S) 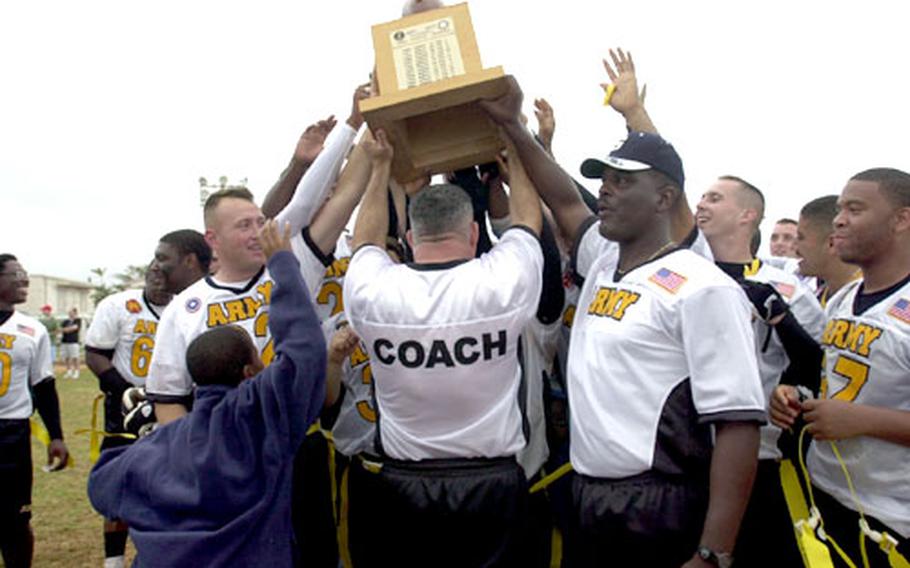 TORII STATION, Okinawa &#8212; While soldiers, sailors and Marines had to wait until approximately 8 a.m. Sunday to determine who would have bragging rights after the annual &#8220;America&#8217;s Classic&#8221; Army-Navy game, troops throughout the Pacific were able to declare their own winner a day early after their own flag football games.

At Yokosuka Naval Base, Japan, overcast skies but pleasant temperatures greeted 200 or so spectators, a handful of distinguished visitors and bands representing both services at the third such game played between Yokosuka sailors and Camp Zama soldiers.

Elaborate pregame ceremonies preceded the contest, and after the final whistle, players on both teams convened for a postgame meal.

On Okinawa, stands were packed at Torii Station and fans lined the guardrail of an overlooking parking lot to watch the action. While skies were threatening with the remnants of Typhoon Nanmadol nearby, the rain stayed away until the end of the fourth quarter, when there was a light sprinkle, but the winds were always present. Strong gusts wreaked havoc on the team that was trying to play into it.

Davis said she was hoping to be on the field to play, but a recently broken hand kept her out of the action. She said next year she&#8217;ll be playing for sure.

Before Davis riled up Navy fans by venturing to the Navy side of the field during halftime, awards were handed out for a youth Punt, Pass and Kick competition that was held earlier in the day. Each team&#8217;s cheerleaders performed a routine, and Okinawan drummers put on a short show.

Chief Petty Officer Mike Haas came out to Saturday&#8217;s game to watch some of his sailors participate, some playing and others cheerleading.

He was confident the Navy would take control in the second half of the game, when players would have the wind behind them in the third quarter.

Sure enough, Navy took a 10-point lead, but blew it in the last minute of the game and lost 30-27 in overtime.

At Yongsan Garrison, South Korea, festivities began long before the 10 a.m. kickoff, as each service staged its own bonfire and pep rally the night before on Yongsan.

But horrid weather dampened the proceedings in the latest installment of the Peninsula Trophy series and turned Falcons Field at Seoul American High, which hosted the game, into a mud fest.

Commanding officers representing both services presided over the ceremonial coin toss, but the crowd was somewhat sparse at 200, about a third of last year&#8217;s attendance.