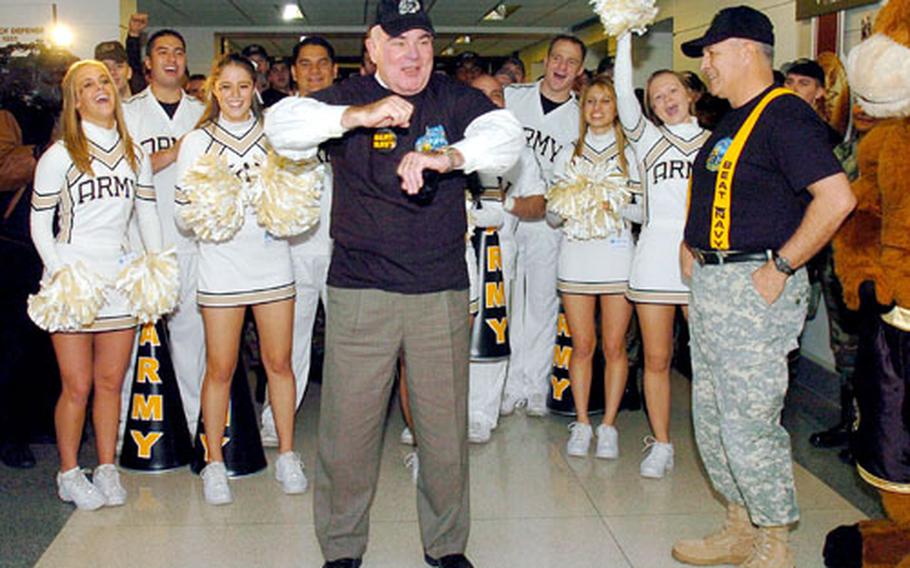 "We&#39;re going to kill the goats!" chants Secretary of the Army Francis Harvey as West Point cheerleaders and bandsmen line the halls of the Pentagon during a pep rally on Friday. (Carmen Burgess / Courtesy of U.S. Army)

"We&#39;re going to kill the goats!" chants Secretary of the Army Francis Harvey as West Point cheerleaders and bandsmen line the halls of the Pentagon during a pep rally on Friday. (Carmen Burgess / Courtesy of U.S. Army) Army Vice Chief of Staff Gen. Richard Cody leads the U.S. Military Academy cheerleaders during their pep rally outside of the Pentagon offices of the Army senior leadership on Friday. (Carmen Burgess / Courtesy of U.S. Army)

ARLINGTON, Va. &#8212; The halls of the Pentagon rattled and rocked Friday morning as the entire U.S. Military Academy pep band, complete with cheerleaders, made their annual pre-game visit to whip up spirit for the Army-Navy football game.

Heads popped out of offices and workers lined the stairwells to watch as the West Point cadets played, cheered and bounced up and down staircases and corridors in their battle-dress uniform trousers and boots.

Pep rallies for the Army and Navy teams are an annual tradition at the Pentagon in the week before the game, led by pep bands from West Point and the Naval Academy at Annapolis, Md.

Separate days are reserved for each service. This year, the midshipmen made the rounds on Wednesday, and the cadets on Friday.

The bands make stops at the offices of not only their own senior leaders, but their rival service&#8217;s, too.

One of the cadets&#8217; first stops Friday was the office of Adm. Mike Mullen, Chief of Naval Operations.

Mullen said he was puzzled by the button&#8217;s lettering.

On a more serious note, Mullen told the West Pointers, &#8220;We&#8217;re delighted to have you here and very, very thankful you chose to do this with your lives.

The pregame festivities offer the usually buttoned-down Pentagon crowd a chance to have some fun and adorn their offices and clothing with signs and buttons boosting their team.

Even senior officers got into the spirit, such as Army Lt. Gen. Raymond T. Odierno, assistant to the chairman of the Joint Chiefs of Staff, who came to work Friday morning wearing a black-and-gold football jersey.

With the record tied at 49 games each, the 2005 rivalry between the two teams is particularly hot this year, Pentagon fans said.