Army, Navy flag football teams to slug it out for service bragging rights 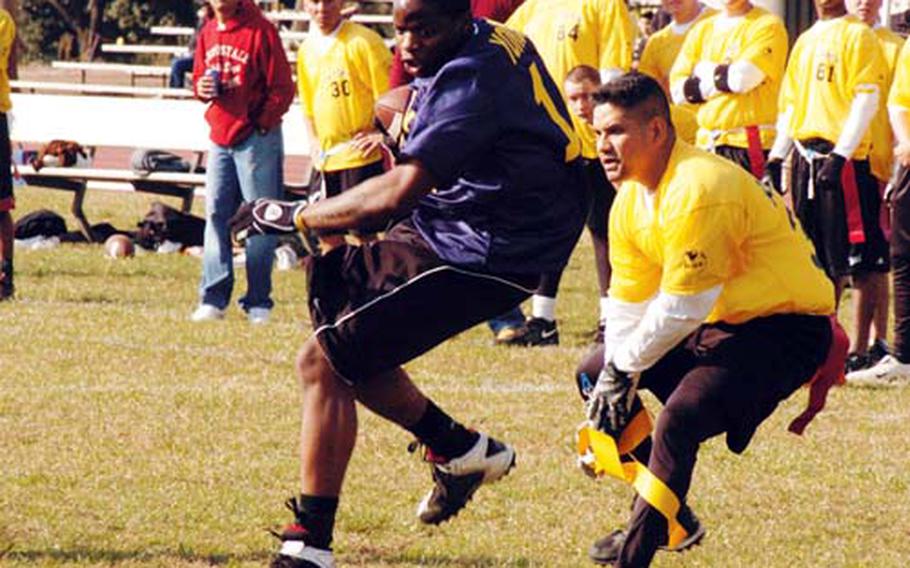 Yokosuka Naval Base&#39;s Lavoris Harris runs the ball for a last attempt at a goal during the final seconds of the game and downed just short of the goal by Army&#39;s David Gomez at an Army-Navy flag football game Saturday at Camp Zama, Japan. The Army team won 13-7. (Christopher B. Stoltz / S&S)

While the Naval Academy pursues its sixth straight Commander-In-Chief&#8217;s trophy, flag football squads in four locales in the Pacific will vie for interservice bragging rights of their own.

As with their collegiate counterparts, the rivalry flag games tend to be ultra-competitive, but comradeship prevails.

Each of Saturday&#8217;s games will feature its own pageantry and color in addition to action on the field.

At Blue Jacket Field, sailors with the USS Frank Cable, Naval Hospital Guam and Naval Magazine will take on soldiers with the Boller Veterinary Clinic and, for the first time, elements of Guam&#8217;s Army National Guard. Kickoff is at 11:15 a.m. Navy leads the series 2-0, including last year&#8217;s 28-0 triumph.

A punt, pass and kick competition is scheduled along with a raffle for prizes.

Activities begin well before the scheduled noon kickoff with the Navy holding a bonfire at 6 p.m. Friday at Camp Coiner. Halftime activities will include performances by Navy and Army cheerleaders.

Berkey&#8217;s field-turfed stadium will welcome U.S. Army Japan soldiers from Camp Zama and Fleet Activities Yokosuka sailors and Marines for the scheduled 11 a.m. kickoff. The series is even at 3-3, including Army&#8217;s 13-7 win last year at Camp Zama.